Justice Amy Coney Barrett was Conservative of the Year in 2020.

Amy Coney Barrett (born January 28, 1972 (age 48) is an Associate Justice of the Supreme Court and former Judge on the U.S. Court of Appeals for the Seventh Circuit, having been appointed by President Donald Trump to the position. She was nominated by President Trump on September 26, 2020 to replace the seat vacated by the death of Ruth Bader Ginsburg, on the U.S. Supreme Court.

After intense, irrational liberal opposition to her confirmation for the Seventh Circuit, which included Dem Senator Dianne Feinstein questioning her religious beliefs,[1] the U.S. Senate voted 55–43 to confirm Barrett on October 31, 2017,[2] with Joe Donnelly, Tim Kaine, and Joe Manchin being the only Democrats who voted for her.

Axios reported a "scoop" that President Trump is "saving" Judge Barrett to be Ginsburg's replacement.[4] As he was deliberating last year over replacing Supreme Court Justice Anthony Kennedy, Trump told confidants he had big plans for Judge Amy Coney Barrett.

"I'm saving her for Ginsburg," Trump said of Barrett, according to three sources familiar with the president's private comments. Trump used that exact line with a number of people, including in a private conversation with an adviser two days before announcing Brett Kavanaugh's nomination. On September 25, 2020, reports circulated that the President had decided to nominate Barrett to replace Ginsburg, confirmed by Trump at a press conference the following day.[5]

Barrett is a favorite among conservative activists, many of whom wanted her to take Kennedy's spot."[6]

Judge Barrett has written that stare decisis or judicial precedent is not absolutely binding and can be overturned for solid reasons: “I tend to agree with those who say that a justice’s duty is to the Constitution and that it is thus more legitimate for her to enforce her best understanding of the Constitution rather than a precedent she thinks is clearly in conflict with it.” [7]

Pro-lifers have praised Barrett as a role model for young women.[8] She has also faced unsurprising opposition from pornographic film "stars".[9]

She married Jesse M. Barrett, a former Assistant U.S. Attorney for the Northern District of Indiana and current partner at SouthBank Legal in South Bend, Indiana. They have seven children, two of whom are adopted from Haiti.

After graduating from Notre Dame, Barrett spent a year as a law clerk for Judge Laurence H. Silberman of the United States Court of Appeals for the District of Columbia Circuit, then did the same the following year for Supreme Court Associate Justice Antonin Scalia. In 1999, she joined the Washington, D.C. law firm Miller, Cassidy, Larroca & Lewin, where she litigated cases in constitutional, criminal, and commercial law. In 2002, Barrett returned to Notre Dame to join the Law School's faculty, teaching and researching in the fields of federal courts, constitutional law, and statutory interpretation. Several of the nation's leading law journals, including the Columbia, Texas, and Virginia Law Reviews, have published scholarly articles written by her on these subjects. During her time on the Notre Dame faculty, three of the Law School's graduating classes voted her "Distinguished Professor of the Year," and former students of hers later described her as "inspirational," "always approachable," and "remarkably fair-minded and smart."[11]

Apart from her work at Notre Dame, Barrett has also served as a visiting professor at the University of Virginia and the George Washington University Law School, and is a member of the American Law Institute. From 2010 to 2016, she was a member of the Advisory Committee for the Federal Rules of Appellate Procedure.[12]

On May 8, 2017, President Trump nominated Barrett for the position of Circuit Judge on the United States Court of Appeals for the Seventh Circuit, succeeding Judge John Daniel Tinder.

Her nomination was heard in September by the Senate Judiciary Committee, where Barrett was sharply criticized by its Democratic members, including Dick Durbin and Dianne Feinstein, who seemed less concerned about her legal and judicial credentials than about whether she would uphold Roe vs. Wade. In 1998, Barrett had written that Catholic judges who objected to capital punishment on religious grounds should consider recusing themselves; moreover, during her time at Notre Dame she had been part of a pro-life faculty organization, and in 2015 had signed a joint letter to Catholic bishops affirming "the value of human life from conception to natural death." Though Barrett stated during the hearing that judges must rule according to the law and not to their personal opinions, Feinstein and Durbin remained hostile, Feinstein in particular remarking that "the dogma lives loudly within you": a line that drew considerable criticism from some observers, who raised concerns that Senate Democrats were applying an unconstitutional "religious test" to Barrett.

In October 2017, Barrett's nomination was passed through the committee on a party-line vote and brought before the Senate, which voted to confirm her by a vote of 55–42. She won the support of all Republican senators, as well as three Democrats (Joe Donnelly, Tim Kaine, and Joe Manchin). Barrett was the first woman appointed to the federal courts during Trump's presidency, and the first of four Trump appointees to the Seventh Circuit Court.

During Barrett's time on the Seventh Circuit, she has written two opinions considered of particular importance. In Doe v. Purdue University (2019), Barrett wrote the majority opinion finding in favor of an anonymous male student at Purdue University who had been suspended and stripped of his scholarship by university administrators who had ruled him guilty of sexual assault. Barrett noted that the administrators had utterly failed to provide the student with due process, and had arbitrarily favored his female accuser's testimony over his. "It is plausible," she concluded, that the university "chose to believe {John Doe's accuser} because she is a woman and to disbelieve John because he is a man....John's allegations raise a plausible inference that he was denied an educational benefit on the basis of his sex."[13]

Barrett's other significant opinion, her dissent in Kanter v. Barr (2019), regarded the issue of gun-ownership rights for convicted felons. The majority upheld a lower-court decision that Kanter (the plaintiff), who had earlier been found guilty of mail fraud, was automatically disqualified from owning a firearm; in her dissent, Barrett argued that Kanter's crime, though a felony, was nonviolent, and to lose one's gun-ownership rights regardless of the nature of the felony was based neither on the wording of the Constitution nor on standards of common sense. Furthermore, she added, it ought to be the rule that, even if felons, citizens retained their constitutional rights by default, unless or until their rights were curtailed by government action (rather than automatically losing them by falling into a designated category).[14]

As of September 20, 2020, Judge Barrett had dissented only seven times in nearly 3 years on the Seventh Circuit.

In Cook County v. Wolf, 962 F.3d 208 (7th Cir. 2020), Barrett dissented in her 40-page disagreement with the panel majority's decision to uphold a preliminary injunction against President Trump's public charge rule cutting off entitlements to some immigrants. Judge Barrett pointed out that an overwhelming majority of those within the scope of the rule were not eligible for government benefits anyway. Judge Barrett wrote that Trump's rule fell within the broad scope of discretion granted by Congress in the Immigration and Nationality Act to the Executive Branch.

In Yafai v. Pompeo, 924 F.3d 969 (7th Cir. 2019), Judge Barrett wrote a decision for the 2-1 panel which rejected a wife's claim for a visa which had twice been denied by a consular officer, despite how her husband was a United States citizen. Judge Barrett wrote for the court that the plaintiff's claim was properly dismissed under the doctrine of consular nonreviewability. Judges Barrett and Joel Flaum wrote opinions concurring in the subsequent denial of the petition for rehearing en banc. 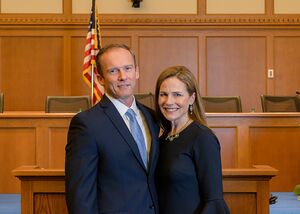 In a challenge to a broad shutdown order by Illinois Democrat Gov. J.B. Pritzker which prohibited gatherings of more than 50 people, Judge Barrett joined an opinion by liberal Judge Diane Wood which ruled against the state Republican Party.[15] The effect of the shutdown order is to block energetic Trump rallies, while allowing BLM rallies.

The Chairman of the Illinois Republican Party, Tim Schneider, declared in connection with filing this lawsuit in June:

The opinion joined by Judge Barrett even included a warning against the state GOP not to complain too much about the shutdown order, lest the governor remove exemptions for religious services which the court said he could do.[16]

In terms of her judicial philosophy, Barrett is, like the late Justice Scalia for whom she clerked, an originalist and a textualist, meaning that she seeks to interpret the Constitution according to what it actually says, not according to what others wish to read into it. On several occasions, she has praised Scalia for holding such a position and for being so attentive to the actual text of statutes he reviewed.[17]

Some of Barrett's more notable legal publications regard the doctrine of stare decisis, that previous legal precedents can, in certain cases, be binding on future courts. She has suggested the doctrine is sometimes applicable, but only in relatively limited circumstances, for instance on matters in which a court decision has such overwhelming support from the legal community and from the broader public that overturning it would be practically unthinkable. Brown v. Board of Education, according to Barrett, would be an example of this. Otherwise, stare decisis is not inviolable; in situations where precedent and the Constitution come into conflict, the Constitution must have first consideration.[18]

Immediately following the death of Justice Ruth Bader Ginsburg on September 18, 2020, rumors circulated that Barrett would be nominated to replace her. President Trump himself and those around him sent signals at once that he would select a woman to replace Ginsburg, and though Barbara Lagoa and other judges were also mentioned, Barrett received the most attention. This speculation was substantiated a week later, when Republican sources announced that Trump had decided to nominate her, and the President confirmed this at his press conference on the 26th. In his statement, Trump described Barrett as "very imminently qualified for the job," praised her "loyalty to the Constitution," and noted the bipartisan vote she had received in her confirmation to the Seventh Circuit. In her own remarks, Barrett praised Ginsburg's achievements in her legal career, while also stressing her originalist philosophy in speaking of her former boss Scalia and saying "His judicial philosophy is mine too...judges are not policymakers."

I think she is qualified as a judge.[19]

Barrett was confirmed by the Senate Judiciary Committee on October 22, 2020 after Democrat members boycotted the vote.[20]

After a Senate hearing in which she impressed members of both parties (though no Democrat senators voted in her favor), she proceeded to a final vote[21] and was confirmed 52–48 on October 26,[22] coincidentally being Hillary Rodham Clinton's birthday,[23] and was sworn in by Supreme Court Associate Justice Clarence Thomas the same day.

After being confirmed to the Court, Barrett declined to participate in a Pennsylvania late ballot case[24] after an elections board sought her recusal from the case;[25] Democrats reportedly considered threatening impeachment against her if she doesn't recuse herself from court cases involving elections.[26]

Barrett joined the other four conservative Justices in a 5-4 court ruling on November 25, 2020 to upload religious freedom against the totalitarian policies of New York governor Andrew Cuomo.[27]

JUDGE BARRETT: Senator, I'm glad to have the opportunity to clarify from our conversation. First, I know that both Justices Gorsuch and Kavanaugh said that "no man is above the law," and I agree with that.

JUDGE BARRETT: But I conversed with Senator Lee yesterday about Federalist 78, which says that courts have neither force nor will. In other words, we can't do anything to enforce our own judgments. And so what I meant in the conversation with you is that as a matter of law, the supreme court may have the final word, but the Supreme Court lacks control over what happens after that. The Supreme Court and any federal court has no power, no force, and no will, so it relies on the other branches to react to its judgments accordingly.[28]