George Papadopoulos is an energy expert for the Eastern Mediterranean, Cypress and Israel. He was an unpaid campaign volunteer during the 2016 presidential election who was set up by NATO-allied intelligence agencies and the Comey FBI to create the false Russia collusion narrative.

Joseph Mifsud, part of a network working with CIA director John Brennan, masqueraded as a Russian intelligence asset and planted false information with Papadopolous claiming that Russians had Hillary Clinton's emails. The CIA used Erika Thompson to lure Papadopolous into repeating the false information Mifsud fed Papadopolous.[1] Thomson's boss, Australian Ambassador Alexander Downer informed the U.S. embassy in London that the Trump campaign supposedly was in cahoots with Russia, which then passed on the false allegations to James Comey, Andrew McCabe, and Peter Strzok of the FBI to justify opening an official counterintelligence investigation against the 2016 Trump campaign. These actions occurred outside the legal process for international intelligence sharing agreements between the U.S. and its allies, and were motivated by an effort to cover-up the illegal domestic political surveillance the Obama administration, and to sway the 2016 presidential election in Hillary Clinton's favor.

Papadopoulos never mentioned Clinton emails to anyone in the Trump campaign.[2] 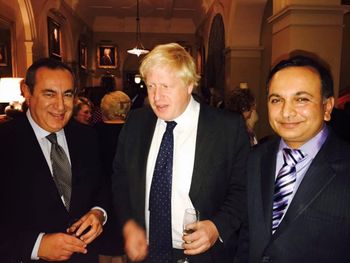 FBI/CIA spy Joseph Mifsud (left) with UK prime minister Boris Johnson (center) two weeks after George Papadopoulos' plea agreement in the Mueller investigation.[3] The entire Trump-Russia conspiracy hoax was hatched by Obama CIA director John Brennan on the false allegation that Mifsud was a Russian agent. Mifsud had been working for Brennan and Jimmy the Weasel Comey all along.[4]

Obama CIA director John Brennan invented a fake narrative that he had received information from foreign intelligence sharing programs that associates of Donald Trump were meeting and taking money from Russian operatives. Brennan passed the fake narrative to James Comey who began counterintelligence surveillance on Paul Manafort and others in the Trump orbit.

Brennan's fake narrative became the basis of the Trump-Russia hoax, taken as gospel by leftists and the mainstream media.[5]

In May 2017 Brennan testified to Congress:

"I was aware of intelligence and information about contacts between Russian officials and U.S. persons that raised concerns in my mind about whether or not those individuals were cooperating with the Russians, either in a witting or unwitting fashion, and it served as the basis for the FBI investigation to determine whether such collusion — cooperation occurred".

Brennan is referring to unsolicited contacts made by Joseph Mifsud, Alexander Downer, and Stefan Halper toward Trump volunteer George Papadopoulos in London, through whom Papadopoulos was brought in contact with people said to be Russian.[6][7] Carter Page and Sam Clovis also met with Halper. Halper was a paid provocateur attempting to compromise Trump campaign workers by baiting them to show interest in Hillary Clinton's missing emails. [8] (Comey previously testified that he deliberately kept Congress in the dark about the counterintelligence investigation on the Trump campaign); Brennan throws Comey under the bus by providing specific dates of compliance with advise and consent provisions for covert activity, and noting that the contacts were referred to the FBI for investigation:

"Through the so-called Gang-of-Eight process we kept congress apprised of these issues as we identified them. Again, in consultation with the White House, I personally briefed the full details of our understanding of Russian attempts to interfere in the election to congressional leadership. Specifically, Senators Harry Reid, Mitch McConnell, Dianne Feinstein and Richard Burr and to representatives Paul Ryan, Nancy Pelosi, Devin Nunes and Adam Schiff between 11th August and 6th September [2016], I provided the same briefing to each of the gang of eight members.

Given the highly sensitive nature of what was an active counter-intelligence case, involving an ongoing Russian effort, to interfere in our presidential election, the full details of what we knew at the time were shared only with those members of congress; each of whom was accompanied by one senior staff member."

The Obama administration institutionalized deception as a tool of government.
We are slowly appreciating over the last year that lying under oath was an Obama-administration requisite for a high position in the intelligence community.
Having engaged in illegality during the Obama administration is better on a résumé than following the law in a Trump government.
And yet still, this one constant keeps reverberating throughout the hysteria: Our elite always values the messenger over the message.

According to Robert Mueller and Adam Schiff, Joseph Mifsud is a Russian agent. Mifsud however was not arrested and charged after four days of questioning by Mueller in the United States in February 2017. Neither have any of the institutions he's worked at begun investigations into a security breach which would have stretched back decades, if the FBI and Mueller's assertions were remotely possible.

Mifsud may have unwittingly been manipulated by John Brennan and Stefan Halper to make contact with George Papadopoulos, given Papadopoulos and Mifsud's interest in the energy sector.

Mifsud and Papadopoulos obtained positions at an organization named the Centre for International Energy and Natural Resources Law & Security. Papadopoulos was a 'nobody' and the Centre sketchy at best. On March 6, 2016, Papadopoulos, who at the time lived in London, spoke with a supervisory campaign official about joining Trump's team.

Mifsud went into hiding after the Washington Post published his name in connection with his meetings with Papadopoulos.

Mifsud is a member of the European Council on Foreign Relations (ECFR) whose top donor is the Soros Open Society Foundation.

The meeting between George Papadopoulos and Alexander Downer was portrayed in American fake news media as a chance encounter in a London pub.[11] It wasn't. It was an entrapment sting designed to justify FBI surveillance of the Trump campaign.[12]

A lawyer from the Australian embassy contacted Papadopoulos fours days in advance and asked to arrange a meeting between Papadopoulos and Downer. At the meeting, Papadopoulos was ordered to "leave [UK Prime Minister] David Cameron alone." Papadopoulos had suggested in a London newspaper that Cameron owed Trump an apology for comments critical of Trump.[13] Cameron colluded with Hillary Clinton and Barack Obama to murder Muammar Gaddafi[14] - an ally of the UK and the US,[15][16] - an action that caused the resurgence of black-African slavery in Libya. Obama said at the time it was done for "humanitarian" purposes.[17]

At the time Papadopoulos quit the Ben Carson campaign to volunteer for Trump, Papadopoulos was lured to London with an offer on a board of a front group known as the London Centre of International Law Practice (LCILP) which he accepted to pad his resume.[18] Prof. Joseph Mifsud also worked with the group. Mifsud introduced Papadopoulos to Russian nationals living in the UK and working with retired UK intelligence officials.[19] One pretended to be Putin's niece, and the other worked with a Russian think tank in London. Mifsud claimed to have access to Hillary Clinton's emails.[20]

In September Papadopoulos was lured back to London by Stefan Halper with a promise of $3000 and airfare to write a paper. Halper and Downer have connections to the shadowy UK security firm of Hakluyt (Halper wrote two books with the Hakluyt representative in the US and Downer sat on its advisory board).[21] Halper, who publicly endorsed Hillary Clinton, asked Papadopoulos about the emails Hillary Clinton stole from the State Department and National Archives and Records Administration.[22]

During Papadopoulos' encounter with Downer in the London pub, Papadopoulos told Downer about the meetings with Mifsud and friends. Downer reported what Papadopoulos said to US State Department back channels, who told John Brennan, who told Comey, McCabe and Strzok, who then opened a counterintelligence investigation based on the unverified, unvetted information to violate the civil and Constitutional rights of members of the Trump campaign, and interfere in the 2016 presidential election.

Two months before the 2016 election, Papadopoulos received a strange request for a meeting in London, one of several the young Trump adviser would be offered — and he would accept — during the presidential campaign. The meeting request came from Stefan Halper, a foreign policy expert and Cambridge professor with connections to the CIA and its British counterpart, MI6.[23]

Halper met with Papadopoulos on September 23, 2016.[24] Halper brought up the subject of Hillary Clinton's emails which he alleged the Russians hacked. Papadopoulos told Halper he knew nothing about any emails or Russian hacking — notwithstanding Halper's aggressive, loaded questioning on the subject.[25]

In November 2016, Halper told Russia Today television that Hillary Clinton would be best for U.S.-UK relations.

Papadopoulos is said to have lied about the timing and scope of his contact Mifsud. Robert Mueller, Jeannie Rhee, and the Mueller office allege that Papadopoulos falsely claimed that contacts with Mifsud started before he joined the Trump campaign. Contacts started on March 14, 2016; this was some time after he “learned he would be a foreign policy advisor for the campaign” (Statrmrnt of Offense, page 3, paragraph 4) but a week before the campaign's March 21 announcement that he was a campaign “policy advisor” (page 4, paragraph 6).