Joseph Mifsud (Джозеф Мифсуд) (born 1960) works for the UK Cabinet Office Security Vetting Appeals Panel and trains NATO intelligence personal and diplomats at Link Campus University in Rome,[2][3][4][5] described as a finishing school for UK spies.[6] FBI agents have also both taught and have trained at the school.[7] At the time of the Obamagate scandal, Mifsud was employed by the Obama/Biden/Clinton/Marc Elias clique in cahoots with anti-Netanyahu Israelis.[8][9]

On the same day Trump campaign volunteer George Papadopoulos was sentenced, Democratic National Committee lawyers reported Mifsud was "presumed dead."[10] Due to Mifsud's alleged death, Mifsud was unavailable for comment after Papadopoulos was free to discuss his story with reporters and Congressional investigators.[11] Mifsud appeared back from the dead a month later when his lawyer, Stephan Roh, said he was alive. He was never interviewed by Special Counsel Robert Mueller, and his whereabouts were only located days after the Mueller Report was made public.

Papadopoulos had been accused of colluding with Russia, meddling in U.S. elections, treason, destroying American democracy [12] (see: fake news) and was sentenced to 14 days in jail. He served eleven nights. Mifsud was posed, according mainstream fake news media, as a Russian intelligence operative. John Brennan, James Comey and Peter Strzok used this false allegation as a pretext to justify investigating Donald Trump.[13] Mifsud spoke at a State Department event three weeks after President Trump's inauguration, was interviewed by the FBI, not detained, and allowed to leave the country.

The Mifsud case is a classic example of the unholy and unethical collusion between the Democratic party, media, and the corrupt Obama intelligence community. 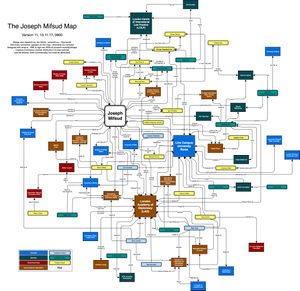 Mifsud is a professorial teaching fellow at the University of Stirling in Scotland, and director of the Diplomatic Academy of London which was used to train Saudi diplomats and intelligence figures, sponsored by the UK's Foreign and Commonwealth Office, the British Council, or the Saudi government. Mifsud is a former employee of the Ministry of Foreign Affairs of Malta and a former principal in the London Centre of International Law Practice (LCiLP). Prasenjit Kumar Singh with UK Prime Minister Theresa May. According to NeverTrumpers, Mifsud is a KGB agent who carried out Putin's instructions to sabotage the 2016 presidential elections. Neither UK intelligence nor NATO ever investigated what would be among the worst intelligence breaches in history if what John Brennan, James Comey, and Robert Mueller claimed were true.[14]

Mifsud taught at Link Campus University in Rome, whose lecturers and professors include senior Western diplomats and intelligence officials from a number of NATO countries, especially Italy and the United Kingdom.[15]

Link offers degrees in strategic studies and “diplomatic science.” Among the students who attend Link are police officers from around Europe, especially Italy, Malta, and eastern European countries, as well as a large contingent from Brazil.

The CIA has held widely publicized events at Link. In 2004, for instance, the CIA arranged a conference on terrorism there. “‘New Frontiers of Intelligence Analysis,’" wrote David Ignatius in the Washington Post, “brought together officials from intelligence and police agencies of nearly 30 countries.” A 24-year veteran of the CIA named Carol Dumaine, wrote Ignatius, “spent two years arranging the conference with the Link Campus of the University of Malta in Rome.”American intelligence and law enforcement officials are also involved with Link.[16] Former National Security Agency and Central Intelligence Agency officers and analysts regularly teach there.

The FBI has trained students at Link since 2010. In September 2016, or two months after the FBI opened its Russia investigation, the FBI’s legal attaché working out of the U.S. Embassy in Rome sent Special Agent Preston Ackerman to conduct a seminar at Link. FBI spokespersons did not respond to requests for comment on the bureau’s past history with Link or Ackerman’s seminar.

CrowdStrike, the DNC cyber-security team, employ senior leaders who are former FBI trainers and researchers that are alumni of LINK Campus in Rome.

Before the story broke in August 2017, Mifsud had been working with CNN’s Freedom Project to host a televised debate, “Solutions to End Human Trafficking”, at Link University.[17]

According to Robert Mueller and Adam Schiff, Mifsud is a Russian agent. Mifsud however was not arrested and charged after four days of questioning by the FBI in the United States in February 2017. Neither have any of the institutions he's worked at begun investigations into a security breach which would have stretched back decades, if the FBI and Mueller's assertions were remotely possible.

Mifsud went into hiding after the Washington Post publicized his meetings with Trump volunteer George Papadopoulos.

Mifsud may have unwittingly been manipulated by John Brennan and Stefan Halper to make contact with George Papadopoulos, given Papadopoulos and Mifsud's interest in the energy sector.

George Papadopoulos, the lower level campaign worker for the Trump campaign, appears to have been targeted by three individuals with ties to British and/or U.S. Intelligence: Stefan Halper, Alexander Downer and Joseph Mifsud. In Mifsud's case, Mifsud may have been used unwittingly.

Mifsud and Papadopoulos obtained positions at an organization named the Centre for International Energy and Natural Resources Law & Security. Papadopoulos was a 'nobody' and the Centre sketchy at best. On March 6, 2016, Papadopoulos, who at the time lived in London, spoke with a supervisory campaign official about joining Trump's team.

The following week, while traveling in Italy, Papadopoulos claims he was introduced by Vincenzo Scotti, former Italian Minister of the Interior and Minister of Foreign Affairs, to Joseph Mifsud. On learning that Papadopoulos would be joining the Trump campaign, the professor shared that he had substantial connections with Russian government officials. Over the next several months, the professor introduced Papadopoulos to different Russian connections. In turn, Papadopoulos shared updates with the Trump campaign about the Russians’ desire to meet with Trump's team.

Mifsud vanished in early November 2017, shortly after Papadopoulos was in the news and indicted. His whereabouts are still unknown. 'If Mifsud is a genuine Russian asset, he has been enabled by the United States’ most trusted allies. His relationship with senior intelligence and political leaders in Europe should constitute one of the greatest security breaches in decades. He had access to diplomats in training, sanctions targets and counter-terrorism strategy in the Middle East and South Asia. However, government reactions don’t show that. The FBI doesn’t appear to have warned their closest allies.”

Mifsud is a member of the European Council on Foreign Relations (ECFR) whose top donor is the Soros Open Society Foundation.

Claus Stephan Roh is a director of four British-registered companies.[21]

Novichok is the poison alleged to have been used in the attack on Sergei and Yulia Skripal in Salisbury, England on 4 March 2018. There has been speculation in the press that Sergei Skripal may have been involved in the production of the anti-Trump Steele dossier.[24]

Further research is needed to determine whether Stephan Roh and Claus Stephan Roh are the same person and whether there is any connection between Novichok and No Vichok.