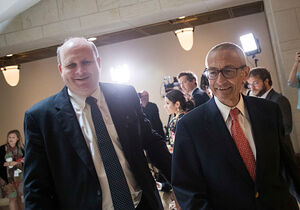 Marc Elias and John Podesta. Neither one were ever prosecuted for lying to Congress about making payments to FusionGPS for the Steele dossier.[1]

Elias is on the board of Democrat Super PAC Priorities USA Action. Elias led a George Soros funded effort against state voter identification laws.[2] The Democratic National Committee reportedly keeps a plane reserved and waiting near Washington, D.C. on election nights to fly Elias wherever a candidate in a close race with a potential recount looming may require his representation.[3]

Elias has been accused of voter suppression and voter intimidation.[4]

Elias resigned from the Perkins Coie law firm just ahead of the anticipated release of Special Counsel John Durham’s report into the origins of the Trump-Russia hoax.[5]

The Washington Examiner reported that Elias and his associates were sanctioned by Texas federal appeals judges for a “redundant and misleading submission” and for violating his ethical “duty of candor” to the court in a case in which the Democratic Party was fighting against a state law that banned straight-ticket voting. Elias and the lawyers were ordered to pay attorneys' fees and double costs, and the judges recommended Elias and his colleagues to review the section of the Model Rules of Professional Conduct on “Candor Toward the Tribunal” and encouraged them to “complete one hour of Continuing Legal Education in the area of Ethics and Professionalism, specifically candor with the court.”[6] Shaya Moss, the Fulton County Georgia supervisor of registration, stuffed the ballot box with tens of thousands of votes for Joe Biden on the night of November 3, 2020 and in the early morning hours after.[9]

2020 voter suppression and disenfranchisement of Blacks

As Kanye West’s presidential campaign raced to get on the ballot before deadlines, Elias was fighting to disenfranchise voters, specifically targeting voter suppression of Blacks. Elias involvement affirmed the belief that Democrats were concerned that having Kanye West on the ballot, especially in swing states, could siphon Black votes away from Democratic nominee Joe Biden. West made ballot status in Arizona, Arkansas, Colorado, Oklahoma, Vermont, Tennessee, Minnesota, Idaho, and Iowa.

Elias was the counsel in a suit to keep Kanye West off the ballot in Virginia. The suit asked for immediate court intervention as deadlines approach for printing and mailing absentee ballots.[12] According to sworn affidavits from election watchers, the racist Democrat machine of Michigan stole all Kanye West votes in the 2020 presidential election and switched the votes to Democrat segregationist Joe Biden.[13]

Following the 2020 U.S. House race in Iowa's second congressional district after a recount that showed Republican candidate Mariannette Miller-Meeks defeating Democrat opponent Rita Hart by merely six votes,[14] with the results soon being certified,[15] Hart called for the election to be overturned.[16] In late December 2020, Elias filed a request to the U.S. House under the Federal Contested Elections Act to overturn the results and steal the seat in favor of the Democrats.[17]

On November 8, two days after the 2018 midterm election, Elias traveled to Broward County, Florida to represent Democrats.[18] A judge ruled county Democrat election officials violated Florida's public records laws and the state constitution, and ordered the county election supervisor to disclose the total number of ballots cast and the total number remaining to be counted.[19] Tampering and chain of custody issues were litigated.[20][21] Lawyers for Democrats want to count the votes on non-U.S. citizens.[22] Elias paid FusionGPS for the Steele dossier on behalf of the Hillary for America campaign and the Democratic National Committee.[24] The Steele dossier was used by the Obama FBI to hoax the FISA court into granting surveillance warrants to spy on the 2016 Trump campaign, Trump transition, and Trump administration.[25][26]

Elias lied to New York Times reporters regarding the employment of FusionGPS.[27] Elias admitted in testimony that sent the bill from Fusion GPS for the Steele dossier directly to Clinton campaign manager Robby Mook.[28] The psychotic stare of Jake Sullivan.

Paul Sperry of Realclearinvestigations reported Biden regime National Security Adviser Jake Sullivan figures prominently in an investigation by Special Counsel John Durham into an alleged 2016 Hillary Clinton campaign scheme to use both the FBI and CIA to smear Donald Trump as a colluder with Russia.[29] Sullivan spearheaded what was known inside her campaign as a “confidential project” to link Trump to the Kremlin through dubious email-server records provided to the agencies. Michael Sussmann, a partner in Perkins Coie, was indicted by a federal grand jury on charges of making false statements to the FBI about a secret Trump-Russia server. After a months-long investigation, the FBI found no merit to the rumor.

A grand jury indicated in its indictment that several people were involved in the alleged conspiracy to mislead the FBI and trigger an investigation of Donald Trump. The Clinton campaign project involved compiling a "digital dossier” on several Trump campaign officials – including Lt. Gen. Michael Flynn, Paul Manafort, George Papadopoulos, and Carter Page. This effort exploited highly sensitive, nonpublic Internet data related to their personal email communications and web-browsing, known as Internet Protocol, or IP, addresses. To mine the data, the Clinton campaign enlisted a team of Beltway computer contractors as well as university researchers with security clearance who often collaborate with the FBI and the intelligence community. They worked from a five-page campaign document called the "Trump Associates List."

The indictment states that Michael Sussmann, as well as the cyber experts recruited for the operation, "coordinated with representatives and agents of the Clinton campaign with regard to the data and written materials that Sussmann gave to the FBI and the media." One of those campaign agents was Jake Sullivan, according to emails Durham obtained. On September 15, 2016 Marc Elias "exchanged emails with the Clinton campaign’s foreign policy adviser concerning the Russian bank allegations," as well as with other top campaign officials, the indictment states.

Jake Sullivan was aware of the participants in the project. These included Fusion GPS, which worked for the Clinton campaign to gather dirt and draft the materials Elias discussed with Sullivan, the materials Sussmann later submitted to the FBI. Sullivan personally met with Elias, who briefed him on Fusion's efforts. Sullivan maintained in testimony before the House Intelligence Committee that he didn’t know of Fusion’s involvement. "Marc [Elias] ... would occasionally give us updates on the opposition research they were conducting, but I didn't know what the nature of that effort was – inside effort, outside effort, who was funding it, who was doing it, anything like that," Sullivan stated under oath. Sullivan testified he didn’t know that Perkins Coie was working for the Clinton campaign until October 2017. Sullivan maintained he didn’t even know that Elias worked for Perkins Coie.

Lying to Congress is a felony. Though the offense is rarely prosecuted, former Special Counsel Robert Mueller won convictions of two of Trump’s associates on charges of that very offense.

The final recount determined six months after the election showed Franken beat Coleman by 312 votes -- fewer votes than the number of felons whose illegal ballots were counted which matched publicly available conviction lists with voting records. Even though it could be determined that felons illegally voted, there was no way to determine how they voted with a secret ballot. Once their votes were mixed in with the total, there is no way to separate them out. The same loophole can be used for non-citizens' voting. This is what is meant by the slogan, "Count every vote."