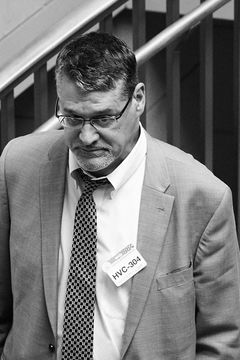 Glenn R. Simpson is the founder of FusionGPS who together with Hillary Clinton, colluded with Russia to effect the outcome of the 2016 presidential election.[1]

In 2007, Glenn Simpson and his wife Mary Jacoby co-wrote a compelling spy-novel-like article titled How Lobbyists Help Ex-Soviets Woo Washington, which contains many of the same names and familiar themes that have been used throughout the entire 2+ year situation.[2][3][4]

In April 2016 The Washington Free Beacon dropped FusionGPS whom they hired to do opposition research on Donald Trump. Two weeks later DNC General Counsel Marc E. Elias of Perkins Coie hired FusionGPS for their clients, the Hillary Clinton campaign and Democratic National Committee.[5][6] Through FusionGPS, the Clinton campaign and DNC paid Russians for dirt on Donald Trump. None of the work Fusion did for the Free Beacon was related to Russia or the false allegations of the Steele dossier.[7][8] Glenn Simpson was working for both Natalia Veselnitskaya and Hillary Clinton at the time Simpson gave "dirt" on Clinton to Veselnitskaya which she carried into the June 9, 2016 Trump Tower meeting with Donald Trump Jr., Jared Kushner and Paul Manafort.

Simpson and Veselnitskaya had been hired by Russian oligarchs through intermediaries to engage in illegal lobbying for the repeal of Russian sanctions.[18][19] Simpson's specific task was to discredit Bill Browder, the driving force behind the Magnitsky Act, or Russia sanctions bill.[20][21] Browder referred to Simpson as "a professional smear campaigner."[22] Simpson met with Veselnitskaya both before and after the Trump Tower meeting.[23] [24]

Robert Mueller has never contacted Veselnitskaya for an interview about the meeting.[25]

The scandal didn't stop there; the Obama FBI and Department of Justice willfully and knowingly lied to the Foreign Intelligence Surveillance Court with cooked evidence to secure surveillance on the Trump team.

"We know, for a fact, the Clinton campaign paid Russians to influence the election...
Most of Mueller’s team is anti-Trump. We know that. What concerns me is, the intent to carry out a plan to disrupt the election. As Mr. Strzok said, we can’t afford to leave this in, We the People’s - hands....
I’m convinced now the FBI actively, seeking with intent, actively tried to stop Donald Trump from being president of the United States. Everything points to the fact that there was an orchestrated plan to try to prevent Donald Trump from being the next President of the United States."[32]

Glenn Simpson was in collusion with the Obama Justice Department three weeks sfter the Russia investigation began, and lied about it under oath to Congress.

Simpson claimed in testimony to the House Permanent Select Committee on Intelligence on Nov. 14, 2017 that he did not have contact with any FBI or DOJ officials regarding the infamous Steele dossier until after the 2016 election. But Bruce Ohr's emails show that Ohr and Simpson were in contact as early as August 2016, three weeks after the Russia investigation began.

Although the Obama administration illegally kept secret from Congressional oversight the FBI's surveillance of Trump and the Trump organization, on September 23, 2016 the first fake news story from the joint Obama FBI/FusionGPS operation appeared in the mainstream media. A story in Yahoo! News by Michael Isikoff about an FBI briefing for Congress sourced to the FBI and not Hillary Clinton's opposition researchers at FusionGPS or Christopher Steele was based on the contents of the Steele dossier.[34]

Christopher Steele swore under oath that he met with at least eight news organizations in September, mid-October, and late-October 2016: “at Fusion’s instruction“.[35] Michael Isikoff said he met with both Simpson and Steele at a DC hotel in a meeting arranged by Simpson.[36] The information Simpson and Steele gave to Isikoff was information Isikoff used in September 23, 2016 Yahoo News article - which the Obama DOJ used to corroborate the Steele dossier when it was presented to the FISA court as probable cause to seek a FISA warrant.

Under oath Simpson responded to questions:

Q Prior to the publication on January 10th [2017], how many journalists would you estimate that you talked to either with Mr. Steele or separately related to this information?

A I mean again I would be guessing.

Q In this case I am asking for an estimate based on your best recollection.

A I am not going to guess, but I will say that again, the depiction of this document as having been peddled around town, it wasn't peddled around town by me. And if someone was peddling it, it was without my knowledge and against my wishes.[37]

January 10, 2017, James Clapper leaked the phony Steele dossier to CNN & BuzzFeed who jointly made it available to the public. Clinton campaign chairman John Podesta, who with the DNC paid for the dossier, secretly met with Simpson.[38] The dossier alleges Russian collusion with the Trump campaign. Steele personally was paid $168,000 to write the phony dossier.

In November 2017 it was reported that Hillary Clinton was again in talks with Christopher Steele to create a second dossier of alleged Trump affairs.[39]

By December outrage of the Obama FBI abuses was omnipresent; in seven hours of testimony before House Permanent Select Intelligence Committee (HPSCI) Dep. Dir. Andrew McCabe made statements that contradicted evidence, and was unable to provide any substantive examples of verified allegations in the Steele dossier. When pushed for examples of what was verified in the anti-Trump dossier, McCabe was only able to cite the fact that Trump campaign advisor Carter Page traveled to Moscow — McCabe could not verify anything about the meetings that Page supposedly had. McCabe claimed he could not recall — despite documents with McCabe's own signature on them establishing his the fact of his knowledge of the dossier's financing and provenance.[40][41]

In January 2018 Sen. Diane Feinstein posted the transcript of Simpson's closed door testimony.[46] Simpson testified that the FBI paid for Steele's travels to Rome. The FBI was sharing information with Steele. Strzok was sharing FBI intelligence with someone paid by Hillary Clinton and the Democratic National Committee. Steele said of the FBI, “they want everything I have.” Simpson admitted the Russian lawyer Natalia Veselnitskaya was lobbying on behalf of Russian interests along with Simpson, against U.S. interests, for the removal of sanctions. Simpson acknowledged that he either worked with or knows of four attendees at the Trump Tower meeting: Irakle Kaveladze, Veselnitskaya, Rinat Akhmetshin, and Anatoli Samochornov. Samochornov also worked on the Prevezon case. Simpson perjured himself in denying that the Democratic party and their nominee Hillary Clinton were his clients.[47]

When Simpson was subpoenaed by the Senate Intelligence Committee, Simpson claimed attorney-client prevented him from revealing anything about the clients.[48] Perkins Coie paid FusionGPS a total of $1,024,408 on behalf of Hillary Clinton for the bogus Steele dossier. The dossier was passed off to mainstream journalists as an authentic KGB document and used by the Obama Dept. of Justice to hoax the Foreign Intelligence Surveillance Court into granting FISA warrants against domestic opponents.

Sometime around Thanksgiving 2016 Simpson met with Obama Dep. Attn. Gen. Bruce Ohr while President-elect Trump was selecting his cabinet, and discussed the Steele dossier, the FBI's Russia investigation, and what Simpson considered the distressing development of Trump's victory. The Steele dossier had been in the hands of the FBI for some five months, and the FISA warrant on Carter Page had been approved more than two months prior.

On October 18, 2017 Peter Fritsch and Thomas Catan, co-founders of FusionGPS, refused to identify the Hillary Clinton campaign and the DNC as the sponsors of Steele dossier. The FusionGPS founders plead the Fifth Amendment right against self-incrimination “to every question asked of them" in House Intelligence Committee investigation.[49]

WaPo published an Oped claiming the

"Steele's dossier does include information it says was obtained from "a senior Russian Foreign Ministry figure and a former top level Russian intelligence officer still active inside the Kremlin." In other words, the Clinton camp and the DNC colluded with the Russian government."[50]

Former Obama CIA Dir. Leon Panetta called for the Senate Intelligence Committee to look into the Clinton campaign and DNC funding of the Steele dossier.[53]

FEC records show Hillary For America paid just under $5.1 million and the DNC paid nearly $5.4 million to the law firm of Perkins Coie in 2016. FEC records also show Obama for America paid $972,000 to Perkins Coie beginning in April 2016, the same time Hillary for America & DNC hired FusionGPS through Perkins Coie.[54] The Campaign Legal Center filed a complaint with the FEC alleging the DNC and the 2016 Hillary Clinton presidential campaign committee violated campaign finance law. They failed to accurately disclose the purpose and recipient of payments for the Steele dossier, effectively hiding these payments from public scrutiny, contrary to the requirements of federal law.[55]

The Daily Caller reported on CNN's undisclosed ties to FusionGPS.[56] The Atlantic reported that, during the Obama administration, Russian oligarchs owned 5% of Facebook and Twitter.[57] The New York Post reported How team Hillary hoaxed the press.[58]

The Washington Times questioned the motives of the Obama appointees' coup attempt:

It was a watershed moment: the CIA, National Security Agency and FBI challenging the legitimacy of a U.S. presidential victory. The conclusions in the Jan. 6 document were sharp, but the findings unraveled 10 months later, raising questions about the basis for the evidence and the motives of the Obama appointees leading the nation’s intelligence and law enforcement agencies.[59]

Prof. Mifsud, one of the FBI's overseas informants, disappeared.[60] Steve Mostyn,[61] Democrat mega donor to Hillary Clinton and Barack Obama, was found dead of a gunshot wound to the head. Mostyn was a co-founder of the Ready for Hillary PAC and the 10th largest donor in the United States.[62][63] Calls for the appointment of a Special Prosecutor mounted.[64][65][66][67][68][69][70]

Simpson formerly was a reporter for The Wall Street Journal covering money laundering and other financial crime, including terrorist financing, tax evasion and corporate misconduct. For nine years, he was based in the Journal's Washington, D.C., bureau. In January 2005, he moved to the Journal's European headquarters in Brussels, Belgium. His past coverage for the Journal includes the 9/11 attacks and their aftermath, technology and privacy, the Justice Department, Congress, banking agencies and the White House, the Federal Trade Commission, and major scandals including Whitewater, foreign campaign contributions and Monica Lewinsky. His October 1996 articles disclosing illegal contributions from Indonesia and China to the Bill Clinton presidential campaign (with Jill Abramson) sparked a year-long congressional investigation into Chinagate and various federal prosecutions and were included in a nomination package by the Journal for a Pulitzer Prize.