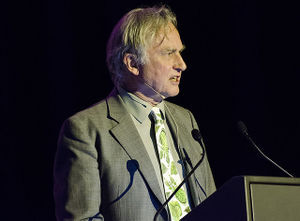 After being vanquished by feminists and losing a great deal of public influence after the Elevatorgate scandal, the new atheist Richard Dawkins told a reporter: “I feel muzzled, and a lot of other people do as well,” he continued. “There is a climate of bullying, a climate of intransigent thought police which is highly influential in the sense that it suppresses people like me.”[1]

Conservatives such as Ronald Reagan and John Wayne, never complained about being bullied by feminists/women.

Bullying is the use of force to get one's own way, typically for a selfish purpose at at the expense of others. Censorship is a type of bullying. A person who perpetrates bullying is known as a bully.

Increasingly liberals try to pass anti-bullying laws as a way of censoring conservative speech and activities, such as quoting from the Bible that criticize homosexuality or rough physical activities such as football. Passage and enforcement of anti-bullying laws is a liberal way to increase government control to the point where people, even children, need to constantly worry about whether Big Brother government approves of what they say or do.

In college and at many public schools, bullying takes the form of intimidating students to prevent them from expressing or defending their conservative views. Teachers[2] and liberal students can use liberal grading to bully students into accepting liberal positions or avoiding conservative ones in classroom discussions and on papers and exams. Statements such as "support for same-sex marriage increases with a higher level of education" is an attempt to bully opponents by embarrassing them or calling them stupid.

Even the Office of the President, sometimes benevolently referred to as "the bully pulpit" to promote social change without government mandates, was misused to bully and impugn collectively the major opposition party in the United States when President Barack Hussein Obama openly accused the Republican Party of seditious acts by "encouraging our enemies".[3]

Bullying can be used to punish students in or outside of class for doing or saying something that is politically incorrect. An example of classroom bullying is for students to ostracize a fellow student based on a viewpoint expressed by that student.

Women, African Americans, and people with Asperger's syndrome who are conservative are also common victims of liberal bullying. Many liberals who are their own kind will commonly accuse them of "turning on their own kind" by supporting the Republican Party and people such as President Donald Trump. Just like any other form of bullying, it can take place in either physical or verbal forms. Groups such as feminists, Black Lives Matter, and other SJWs are the most common perpetrators of this.

Children in public schools are not encouraged to bully other, weaker children, and many schools have strict rules preventing bullying. Those who do choose to break the rules can take the form of teasing, hitting, extortion ("Give me your lunch money"), and so on. Children who engage in this type of bullying tend to do so as means of acting out due to problems in their home lives, such as parental abuse or being in poverty.

Educators have been known to countenance the practice by saying that as kids grow up, they simply must learn to deal with bullies.[4] The implication is that they can learn this on their own, while academic subjects such as arithmetic and English must be learned from books and teachers.

It is commonly said that bullying is "simply part of growing up" or part of "the rough and tumble of childhood."[5]

Many academic approaches go out of their way not to mention using any kind of adult force (let alone punishment) to stop bullies. One Canadian program is an exception:

If the bullies will not change their behavior, despite concerted efforts by school personnel, the bullies, and not the victims, should be the ones who are removed from the class or school, or transferred to another program. Consequences for the perpetrators will be of considerable interest to all students, and will set the tone for future situations.[6]

Response and Prevention of Bullying

Besides telling an adult, there are other things kids can do to stop themselves from being bullied or prevent bullying in the first place. They include but are not limited to