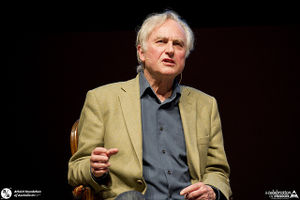 In 2013, Martin Robbins wrote in the New Statesman concerning the public persona of Dawkins: "Increasingly though, his public output resembles that of a man desperately grasping for attention and relevance..."[1]

Recently, Richard Dawkins has been reduced to Tweeting provocative Twitter post in order to gain attention. After the predictable ensuing uproar, Dawkins half-heartedly apologizes for the provocative Tweets.[2] A 2011 portrait of Rebecca Watson. Watson was a central figure in the Elevatorgate scandal.

Although his following of Dawkian atheist has significantly waned post Elevatorgate and due to his generally abrasive manner, as noted above, he does retain a small cult following (See: Richard Dawkins' cult of personality and Atheist cults). In addition, Dawkins frequently faces accusations of engaging in Islamophobia (see: Richard Dawkins and Islamophobia accusations).

As noted above, Dawkins is a leading figure in the New Atheism movement. The movement was called a cult by the agnostic, journalist Bryan Appleyard in a 2012 article in the New Statesman in which he describes the abusive behavior of New Atheists.[3] See also: Atheist cults

On November 6, 2015, the New Republic published an article entitled, Is the New Atheism dead?[4]

Below is a Google trends data graph related to monthly Google searches for the term "Richard Dawkins".

In October of 2012, Rebecca Watson published a story about Elevatorgate and its aftermath in Slate entitled, It Stands to Reason, Skeptics Can Be Sexist Too: I spoke out about sexual harassment among atheists and scientists. Then came the rape threats.[8]

The web traffic was measured via Quantcast which directly measured Dawkins' website traffic via embedded code on his website.[9]

The above graph shows the monthly website traffic to Richard Dawkins' website as of June 22, 2015 in terms of unique monthly web visitors.[10] As you can see above, in 2012, Richard Dawkins saw a very large decrease in web traffic. On November 1, 2020, Richard Dawkins' website was the 194,776th most popular website in the world according to Alexa.

On November 1, 2020, the daily time on his website for an average web visitor to his website was 1 minute and 36 seconds according to Alexa.

In 2016, the Shadow To Light blog wrote in article entitled Fading Dawkins:

According to the web traffic tracking Compete.com, Richard Dawkins website saw a loss of web traffic during the period between 4/2011 to 4/2012.

Despite the medical advice of his doctors, Richard Dawkins had a very active Twitter presence before his minor stroke (with a number of Twitter controversies) and numerous public controversies.[12]

Dawkins has accumulated over 30,000 Twitter tweets.[13] The Independent reported, "Dawkins also admitted he wasn't very good at managing Twitter and the strong reactions his posts tend to provoke. 'Twitter is very difficult medium to handle,' he said. 'I’m not much of a diplomat.'"[14] However, after his stroke, in May 2016, Dawkins gave up posting on Twitter and the tweets that appear in his name are done by his staff.[15]

Richard Dawkins coined the term and the concept of a meme. The Merriam-Webster dictionary defines a meme as "an idea, behavior or style that spreads from person to person within a culture."

Professor Eric Kaufmann told a secular audience in Australia: "The trends that are happening worldwide inevitably in an age of globalization are going to affect us."[16] See: Decline of global atheism

Johns Hopkins University Press reported in 2014 about global creationism: "Over the past forty years, creationism has spread swiftly among European Catholics, Protestants, Jews, Hindus, and Muslims, even as anti-creationists sought to smother its flames."[17] See also: Evolutionary indoctrination

Post Elevatorgate and subsequent to his various embarrassing/inflammatory Twitter posts, many atheists are now asking if he is a liability to the atheist movement.[18]