Richard Dawkins declared "Christianity may actually be our best defence against aberrant forms of religion that threaten the world".[1] See also: Richard Dawkins and Islam

Since his Elevatorgate controversy. various embarrassing posts to Twitter and other embarrassing public statements, atheists are divided on whether the new atheist Richard Dawkins is an asset or a liability to the atheist movement.[2]

Below are a collection Richard Dawkins quotes.

On November 18, 2014, Richard Dawkins indicated that: he stands by his recent remarks about women/men relations, he feels muzzled by "thought police" and that Rebecca Watson's experience in the elevator was "rather trivial" compared to events some Muslim women experience.[6]

An article by Sarah posted at Skepchick about a conversation between Richard Dawkins and David Silverman who formerly served as the president of the American Atheists organization:

"Christianity may actually be our best defence against aberrant forms of religion that threaten the world". - Richard Dawkins[9]

The new atheists Richard Dawkins, Sam Harris and the late Christopher Hitchens have received multiple accusations of engaging in Islamophobic behavior.[10] Dawkins is dismissive of the concept of Islamophobia and declared: "I’m always being accused of Islamophobia, that’s a non-word."[11] A Christian apologetics website provides some additional commentary on the Ben Stein/Richard Dawkins interview which focuses on Dawkins response to Ben Stein's questions about the likelihood of the existence of God:

Stein expressed surprise in the narration that Richard Dawkins "believe[d] in intelligent design."[15]

Richard Dawkins stumped by a creationist 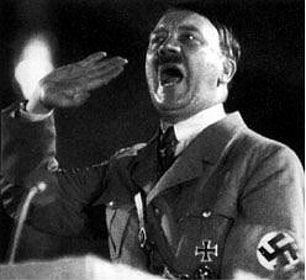 The evolutionist and agnostic Richard Dawkins said in an interview: “What’s to prevent us from saying Hitler wasn’t right? I mean, that is a genuinely difficult question."[16]

As noted earlier, when asked in an interview, "If we do not acknowledge some sort of external [standard], what is to prevent us from saying that the Muslim [extremists] aren’t right?", Dawkins replied, "What’s to prevent us from saying Hitler wasn’t right? I mean, that is a genuinely difficult question, but whatever [defines morality], it’s not the Bible. If it was, we’d be stoning people for breaking the Sabbath."[16]

The interviewer wrote in response, "I was stupefied. He had readily conceded that his own philosophical position did not offer a rational basis for moral judgments. His intellectual honesty was refreshing, if somewhat disturbing on this point."[16]

Below is the dialogue between Richard Dawkins and Giles Fraser:

Examples of intolerance from Richard Dawkins The New Atheist Richard Dawkins has stated that “we are cousins of chimpanzees, somewhat more distant cousins of monkeys, more distant cousins still of aardvarks and manatees, yet more distant cousins of bananas and turnips.” He states that scientists who “deny” this view of “evolution” are irreputable for doing so. He points out that, “The evidence for evolution is at least as strong as the evidence for the Holocaust, even allowing for eye witnesses to the Holocaust. It is the plain truth” and correlates holocaust deniers with evolution deniers and stated, “More than 40 per cent of Americans deny that humans evolved from other animals [and from bananas and turnips]…I shall be using the name ‘historydeniers’ for those people who deny evolution…I shall from time to time refer to the history-deniers as the ‘40percenters.’”[20]

Richard Dawkins told Rabbi Shmuley Boteach, “you shriek like Hitler…You shriek and yell and rant like Hitler…you periodically rise to climaxes of shrieking rant, and that is just like Hitler.”[21]

Dawkins refers to evolutionists who, he claims, are creationist appeasers, “the Neville Chamberlain school of evolutionists.”[22] Chamberlain (1869-1940) was the Prime Minister of the United Kingdom of Great Britain and Northern Ireland from May 27, 1937 to May 10, 1940 and is infamous for declaring “peace in our time” after signing the Munich Pact with Adolf Hitler’s Nazi Germany which resulted in Hitler taking Czechoslovakia and invading Poland.

As for Hitler himself, Dawkins said, “What's to prevent us from saying Hitler wasn't right? I mean, that is a genuinely difficult question.”[23]

Regarding parental rights, Richard Dawkins states: “How much do we regard children as being the property of their parents? It's one thing to say people should be free to believe whatever they like, but should they be free to impose their beliefs on their children? Is there something to be said for society stepping in? What about bringing up children to believe manifest falsehoods?”[24]

He also said, “Catholic child? Flinch. Protestant child? Squirm. Muslim child? Shudder. Everybody's consciousness should be raised to this level…I could well imagine that this linguistically coded freedom to choose might lead children to choose no religion at all.”[25]

Larry Taunton “What is the objective of your anti-religious campaign?” in his article, he wrote Dawkins’ reply like this, “‘I think my ultimate goal would be to convert people away from particular religions toward a rationalist skepticism, tinged with … no, that’s too weak,’ he said, correcting himself, ‘… glorying in the universe and in life. Yes, I would like people to be converted away from religion to skepticism.’” [ellipses in original][23]