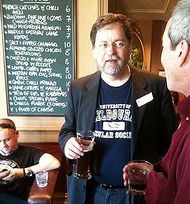 The atheist PZ Myers declared on September 27, 2014, "I will make a prediction, right here and now.... The number of people identifying as atheists will stagnate or even shrink..."[1] See: Desecularization and Decline of global atheism

On July 24, 2013, CNS News reported about the global atheist movement:

Professor Eric Kaufmann, who specializes in the study of irreligion/religion/demographics/politics, told a secular audience in Australia: "The trends that are happening worldwide inevitably in an age of globalization are going to affect us."[6]

In 2011, atheist Jacques Berlinerblau declared: "The Golden Age of Secularism has passed."[8]

In 2011, atheist Jacques Berlinerblau wrote: "The Golden Age of Secularism has passed."[8]

In 2018, the atheist PZ Myers quotes an atheist activist who declares: "It’s quite depressing that movement Atheism has turned into such a joke. I valued it so much once."[14] Furthermore, Myers says the atheist movement is in "shambles" and this is "quite depressing" for him.[15]

The atheist activist Hemant Mehta argues that there never was an atheist movement and that people who wanted their to be an atheist movement wrongly assumed "there’s some list of beliefs everyone has to subscribe to." (See also: Schools of atheist thought)[16] Similarly, a blogger at Freethought Blogs indicates: "To be honest, I never saw "atheism” as much of a “movement” as an uneasy coalition, which may, in fact, now be unraveling."[17]

Participation in the atheist community more difficult than in many communities

In an essay entitled How the Atheist Movement Failed Me, an atheist woman noted that participation in the atheist community is often expensive due to the cost of attending atheist conferences and even local atheist meetings in restaurants and bars challenged her modest budget.[18] As a result of the challenges that atheists commonly have in terms of socializing in person, some atheists turn to the internet in terms of communicating with other atheists.[19] Often internet communication between atheists turns acrimonious and contentious (see: Atheist factions).

The atheist Jerry Coyne said about atheist meetings, "But to me the speakers and talks have often seemed repetitive: the same crew of jet-set skeptics giving the same talks." (see also: Atheism and inspiration).[20]

John W. Loftus, one of the more prominent atheists in the atheist community, cites John Draper (a Canadian atheist blogger), saying about prominent atheist PZ Myers: "According to PZ you either agree with him or you are the scum of the earth. If anyone is giving atheists a bad reputation it's PZ - he shows no tolerance or respect for anyone other than himself."[22]

PZ Myers wrote: "But see, this is why the atheist movement can’t have leaders. The ones we’ve got, informally, all seem to think they’re like gods and popes, infallible and unquestionable, and that normal, healthy, productive criticism within the movement is all a conspiracy to dethrone them."[23]

On July 24, 2020, the atheist PZ Myers wrote about atheism: "Deep rifts, ongoing fragmentation, and crumbling reputations seems to be the order of the day in atheism."[24] See also: Atheist organizations and scandals and Atheist scandals

Jacques Rousseau wrote in the Daily Maverick: "Elevatorgate..has resulted in three weeks of infighting in the secular community. Some might observe that we indulge in these squabbles fairly frequently."[25] An ex-atheist wrote: "As an Atheist for 40 years, I noticed that there is not just a wide variety of Atheist positions, but there exists an actual battle between certain Atheist factions."[26]

The atheist and secular leftist PZ Myers, who frequently champions feminism (see also: Atheist feminism), wrote in 2016: "We are fractured because there are deep disagreements about how to address serious social issues. Worse, because some people won’t even accept the dehumanization of fellow human beings as something more substantial than ridiculousness."[27]

The atheist David Smalley said about the atheist movement: "We're eating our own... We’re disintegrating."[29]

In terms of politics and atheist infighting, there is considerable friction between right-wing atheists (and right of center atheists) and secular leftist/progressive atheists.

At Splice Today, Dylan Green wrote about the Mythcon 2017 Conference: "If there’s a point in time where atheism’s cold war of progressive versus reactionary flavors came into being, it would be the day when Mythcon was held."[31] At Mythcon 2017, Carl Benjamin and other anti-progressive YouTube atheists spoke which upset many progressive atheists.[32][33] Shortly after the conference, the progressive atheist PZ Myers wrote a blog post entitled Time to nuke the fault line and split the rift deeper[34]

Ineffectualness of the American secular movement

A speaker in the atheist panel discussion "Where do we go from here?" at Reason in the Rock 2013 declared: "We are still culturally and politically marginal. We still don't have very much influence... We are ineffective."[37]

Decline of the New Atheism movement

In 2015, the atheist author Joshua Kelly wrote about the decline of the New Atheism movement:

On November 6, 2015, the New Republic published an article entitled, Is the New Atheism dead?[39]

Elevatorgate controversy caused deep divisions within in the atheist movement

Although the New Atheist Richard Dawkins was always known for his abrasiveness and arrogance, post Elevatorgate and subsequent to his various embarrassing Twitter posts, many atheists are now asking if he is a liability to the atheist movement.[41] See: Atheism and public relations

See also: Decline of militant atheism in the West and Atheism and public relations

New Atheism is a form of militant atheism as far as its rhetoric.

Although the new atheist Richard Dawkins was always known for his abrasiveness and arrogance, post Elevatorgate and subsequent to his various embarrassing Twitter posts, many atheists are now asking if he is a liability to the atheist movement.[41]

Thunderf00t on the impact of Freethought Blogs and Rebecca Watson

He also indicated that the accomplishments of Rebecca Watson are very thin and that she promotes feminism in an offensive manner.[47]

In addition, Thunderf00t commented on how Jen McCreight, the founder of the atheist feminist movement Atheism plus abandoned her movement within two weeks. And how Richard Carrier "the intellectual artillery" of the movement, quit promoting the movement within a month.[47]

Galen Broaddus on opting out of atheist movement

The atheist blogger Galen Broaddus wrote about opting out of the atheist movement:

At the present time, Broaddus describes himself as an "occasional secular activist".[53] Women and the atheist movement

Historically, in the Western World, the atheist community has been made up of predominantly white individuals who have had a reluctance and/or inability to attract racial minorities into their community (see: Western atheism and race and Evolutionary racism). The atheist Geoffrey Lee Hodge wrote in an article at Humanist.com:

It is common in theistic cultures for atheists to be reluctant to tell others about their atheism (see: Atheism and apathy).

See also: Views on atheists and Atheists and the endurance of religion

Social science data indicates that in theistic cultures that distrust of atheists is enduring and deep seated (see: Views on atheists and Atheists and the endurance of religion).

See also: Global atheism and Secular Europe and Atheism in the Anglosphere and Asian atheism According to the Irish atheist Michael Nugent: "The atheist movement is global. It is not defined by the mostly American ‘deep rifts’ disagreements."[58]

However, various American atheists attacking the British new atheist Richard Dawkins resulted in a marked decline in Dawkins' influence/popularity and helped cause a very significant decline in the atheist movement as a whole (see also: Richard Dawkins' loss of influence and Decline of the atheist movement and British atheism). In addition, there is very little cooperation between Anglosphere atheists and other other atheists such as Asian atheists (most atheists are probably East Asians).

In addition, Irish atheists have a reputation for being ill-tempered/quarrelsome just like their American counterparts.[61] According to the Irish Independent, "If there's one thing you can take for granted, it's that atheists tend to be a rather cranky bunch."[61] See also: Atheism and social/interpersonal intelligence

Furthermore, as noted above, the global atheist population is shrinking as a percentage of the world's population (see: Global atheism statistics). Asian atheism is seeing a decline due to the explosive growth of Christianity in China (see: East Asia and global desecularization). As far as Europe, in Protestant Europe, France and the UK, the secularization rate is at zero (see: European desecularization in the 21st century).

Composition and structure of the American atheist movement

David Silverman is president of the American Atheists organization.

The Journal of Contemporary Religion says about the composition and structure of the American atheist movement:

Atheist movement and its public speakers

The Reason Rally was billed as the largest secular event in history.[65] It was held in the National Mall in Washington, D.C. on March 24, 2012.

Scott Simon of National Public Radio (NPR): "I have covered a lot of wars, famines and tragedies. And it seems to me, truly every theatre of suffering I have ever been to, there is a dauntless nun, priest, clergy or religious person, who is working very selflessly and bravery there for the good of human beings. But I don't run into organized atheists who do this.

New atheist Richard Dawkins: "Perhaps there is not enough of them."...

Scott Simon, NPR: "But I do wonder am I just not seeing the world correctly to see large numbers of well-motivated atheists lending their lives to trying to better the world... If I might put it this way, are they just more concerned about being right intellectually."[68]

Australian atheist movement and the cancellation of 2018 Global Atheist Convention

See also: 2018 Global Atheist Convention that was cancelled and Irreligion in Australia and Atheist feminism

Robert Martin from Melbourne’s City Bible Forum indicated about the cancellation of the 2018 Global Atheist Convention: "This is a massive blow to the Atheist Foundation as an organisation and to organised atheism in Australia. Where to next? What do they stand for?”[72] According to Martin, fragmentation within today's atheist movement in Australia is a key reason that the convention may have been difficult to sell (see also: Atheist factions).[73]

The atheist and feminist writer Any Roth wrote about the atheist population having apathy about atheist art: "Does art matter to atheism? This is actually an interesting question that I don’t think movement atheist thinks much about."[74]

In contrast to the atheist movement, Christians and other religious faiths historically are prolific in terms of producing musical/art works related to their faith/worldview and many great works have been produced over the centuries (See also: Atheist art and Argument from beauty).

"Atheism, I think, is a weird movement. I don't know if we can even call it a movement. To have a movement, you must have followers. And atheists are not followers." - Dan Barker, co-founder of the Freedom From Religion Foundation[75]