Penn Fraser Jillette (born March 5, 1955 in Greenfield, Massachusetts, USA) is an illusionist, juggler, Libertarian activist and atheist activist (see also: Celebrity atheists). He is best known for his work with fellow illusionist Teller in the team of Penn & Teller. The duo often perform in Las Vegas and have their own TV show Penn & Teller:Bull**** on the Showtime channel.

Penn Jillette is an outspoken weak atheist which is a form of agnostic ( See: Definition of atheism).[2][3]

Involvement in the Brights Movement[edit] The Brights Movement was started in 2003 by Paul Geisert and Mynga Futrell in 2003 in order to assist in the advocacy of a naturalistic worldview.[4][5] The Brights movement had a media campaign and was announced in Wired magazine (by Richard Dawkins), Free Inquiry (by Richard Dawkins), and on the New York Times op-ed page (by the philosopher and atheist Daniel Dennett).

The ABC News.com commentator John Allen Paulos remarked of the “brights” campaign, “I don’t think a degree in public relations is needed to expect that many people will construe the term as smug, ridiculous, and arrogant.”[9]

Unlike the skeptic Michael Shermer who had second thoughts after endorsing the Brights Movement, Penn Jillette has never publicly denounced the Bright Movement for its smugness and remains listed on on its website as an "Enthusiastic Bright" (See: Atheism and arrogance).[10][11]

A National Public Radio's review of Penn Jillette's book God, No! Signs You May Already Be an Atheist and Other Magical Tales declared:

See also: United Church of Bacon and Atheism and mockery and Atheists and pork consumption and Dietary practices of atheists 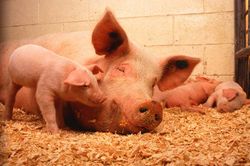 Jillette voted for Hillary Clinton in a vote swapping arrangement with someone who voted for Gary Johnson.[15]

Donald Trump wrote on Twitter: "I loved firing goofball atheist Penn @pennjillette on The Apprentice. He never had a chance. Wrote letter to me begging for forgiveness."[16]

Although Penn Jillette admitted that being on The Apprentice helped his career tremendously, he claims he was unfairly denied winning his competition on the show.[17][18]