Las Vegas is the largest city in Nevada, famous for its casinos, gambling and high-profile entertainment. It is nicknamed "Sin City." The Recession of 2008 hit hard, as tourism fell off sharply and several multibillion-dollar casino complexes planned in good times opened to face bankruptcy. Election fraud there gave Leftist Dem Harry Reid -- who disparaged Justice Clarence Thomas so unprofessionally that it could be called racist -- a boost of many points over polling in his final reelection to the U.S. Senate in 2010.

Before 1800 the area was occupied by the Paiute Indians. A small trading center was founded by Mormons in the early 20th century.

It remained a small settlement until Bugsy Siegel built the first casinos there in 1946 and it became a hotbed for Mafia operations. Now it is one of the fastest-growing cities in the USA and most of the gambling is controlled by entertainment conglomerates. Half the revenue of the city is procured directly from the money people lose gambling.

The Chamber of Commerce is a local private organization that supports civic activism and economic growth in the community. Its members are local businesses and not-for-profit organizations (such as hospitals and universities). It represents "Main Street" (that is, locally owned businesses) but also includes branches of national chains.

Sin is a big draw for men. The Las Vegas Chamber of Commerce energetically promoted tourism in the 1930s, following the completion of Hoover Dam. They featured an image of Las Vegas as a 'last frontier.' Advertising brochures, newspaper publicity, and motion pictures celebrated Las Vegas for its hospitality, legal gambling, easy divorce laws, and local naughty attractions. It worked, as shown by the increasing number of tourists and visitors in the late 1930s. Completion of the El Rancho Vegas resort casino in 1941 foreshadowed the postwar boom in resort hotels.[1] However, prostitution (which is legal in many other areas of Nevada) is illegal by state law in Las Vegas and surrounding Clark County.

Las Vegas is known as a quick place to marry and caters to a variety of individual tastes in the area of personal (mis)behavior. For instance, a couple can get married in Vegas by an Elvis impersonator. "Quickie" divorces are commonplace.

The mayor of Las Vegas is Oscar Goodman. 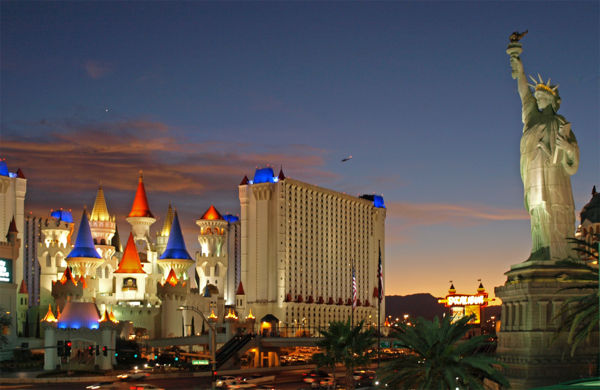