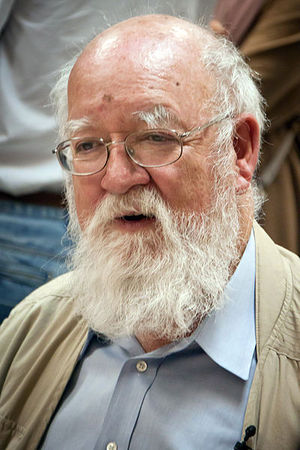 Daniel Dennett is a philosophy professor at Tufts University who actively promotes the naturalistic world view through such books as Darwin’s Dangerous Idea. Dennett is a militant atheist who came to prominence in the atheist community following the publication of his antichristian polemic Breaking the Spell, which was widely rejected by people of faith and theologians as arrogant, ignorant, and often factually incorrect.

Dennett is widely regarded by atheists, who dispute the evidence for an intelligent designer, as one of the premier philosophers in the world in the area of consciousness. Dennet's book Consciousness Explained is beloved by those who deny God in favor of a naturalist philosophy of the mind. However, Christian apologists claim he cannot solve real-world questions concerning consciousness.[1][2] Dennet proposes his initial multiple drafts model of consciousness, where he proposes that there is no single source of consciousness (no conscious qualia), as proposed by many of his contemporaries.

He has been criticized by some of his peers for denying the existence of qualia and sticking with naturalist models of consciousness (he later expanded the multiple drafts model to the fame in the brain model in his 2005 book Sweet Dreams) as he insists that there is no evidence, and that neurological science will, in time, progress to make the idea of qualia, or the source of seemingly inexplicable functions in the mind, obsolete.

Dennett has also been a proponent of Evolutionary Psychology as well as Richard Dawkins' idea of the meme. This led to some notable clashes with paleontologist Stephen Jay Gould.