Paul Edwards, who was a prominent atheist and editor of the Encyclopedia of Philosophy, defined an atheist as "a person who maintains that there is no God." [7]

Beginning in the latter portion of the 20th century and continuing beyond, many agnostics and atheists have argued that the definition of atheism should be a lack of belief in God or gods.[5][6][7][8] See: Purpose of redefining atheism and Weak atheism

Historic roots of the word atheism

Eric Hatfield states at the website Is there a God? concerning the Stanford Encyclopedia of Philosophy:

Advocacy of a broader definition of atheism: 19th century and contemporary efforts

See also: Attempts to dilute the definition of atheism and Definitions of atheist and agnostic As noted above, in the late 19th century and more broadly in the latter portion of the 20th century, the proposition that the definition of atheism be defined as a mere lack of belief in God or gods began.[5] It is now common for atheists/agnostics and theists to debate the meaning of the word atheism.[5][11]

The English agnostic Charles Bradlaugh, in 1876, proposed that atheism does not assert "there is no God," and by doing so he endeavored to dilute the traditional definition of atheism.[13] Since 1979, many atheists have followed Bradlaugh's thinking further and stated that atheism is merely a lack of belief in any god.[5] The motive for such a shift in meaning appears to be to an attempt to shift the burden of proof regarding the existence of God to the theism side.[5]

In the article, Is Atheism Presumptuous?, atheist Jeffery Jay Lowder, a founder of Internet Infidels which owns and operates the Secular Web (the Secular Web is a website focused on promoting atheism, agnostics and skeptics on the internet), states that "I agree (with Copan) that anyone who claims, "God does not exist," must shoulder a burden of proof just as much as anyone who claims, "God exists."[5] In short, the attempt to redefine atheism is merely an attempt to make no assertions so no facts need be offered. The attempt to redefine atheism, however, is not in accordance with the standard definitions of atheism that encyclopedias of philosophy employ which is that atheism is a denial of the existence of God or gods.[5]

The purpose of all these exercises in redefinition is to try to slant the rhetorical playing field in favor of the atheists and against believers:

Many atheists like to make a distinction between strong atheism and weak atheism. They define strong atheism as believing God does not exist, while weak atheism as neither believing nor disbelieving. However, this usage is incorrect, and has been invented by atheists to boost their numbers. If you believe God does not exist, you are an atheist. If you neither believe nor disbelieve, you aren't an atheist, you are some kind of agnostic.

Traditional definition of atheism, strong atheism and accusations of dogmatism 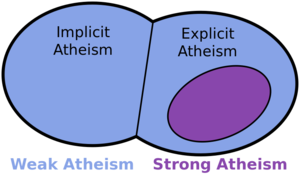 A diagram showing the relationship between the definitions of weak atheism/strong atheism and Implicit/explicit atheism. See: Implicit and explicit atheism

The British atheist Sanderson Jones is a founder of the Sunday Assembly "atheist church" movement.[18]

Atheism is a religion and this has implications in terms of the disciplines of religion, philosophy, Christian apologetics and law.[19] In addition, although many atheists deny that atheism is a worldview, atheists commonly share a number of beliefs such as naturalism, belief in evolution and abiogenesis.[20]

If the view that there is no God (or are no gods) is a religion, it is argued its expression is constitutionally protected in the United States.[21] The government cannot force atheists to recant and adopt the opposite belief.

The implications go deeper, affecting public education. If atheism is a religion, then the atheism adhering to the methodological naturalism of physical science cannot be given excessive government support. That would violate the establishment of religion clause. So, evolution education would have to allow students freedom to dissent from the "orthodox" pseudoscientific view that human beings evolved from earlier forms of life without any intervention from God. It should be noted that biology courses only require knowledge of what the theory of evolution, its mechanisms, and the evidence supporting it, rather than belief that evolution occurred.[22]

Common argument by atheists relating to the defining of atheism

Another specious atheist argument is "Christians are atheists about all Gods but one". But this ignores that god is used in two different ways. Little-g god, refers to a limited being, like the gods of mythology, with immense but not absolute power. It is possible for multiple such limited beings to exist. Capital-G God, refers to an omnipotent being, as conceived in religions such as Judaism and Christianity. It is impossible for there to exist more than one omnipotent being - what happens if two omnipotent beings have a disagreement? So, Zeus is not comparable to the Christian God, and the Christian's disbelief in Zeus is not a form of atheism.

Also, Christians need not deny the existence of the gods of other religions, and hence can not truly be called atheists with respect to them: