Britain has had a significant influence on global atheism through its promotion of the atheistic ideology of evolution.

In the beginning portion of the 21st century, various members of Britain's atheists/agnostics, for example Richard Dawkins, have engaged in aggressive atheism evangelism efforts. In addition, the late Christopher Hitchens was born in Britain and emigrated to the United States in 1981 was a high-profile atheist. However, the movement they lead, New Atheism, has significantly waned and is now essentially dead (see: Decline of New Atheism).

In December 2018, The Times indicated: "The number of atheists in Britain has fallen in the past year, according to a survey suggesting that more people are attending church, albeit irregularly."[4]

In the United States, the vast majority of individuals who are "Nones"/"no religion" (people who are not part of organized religion) believe in the existence of God. Fewer than 15% of the "nones" consider themselves atheists.[6] 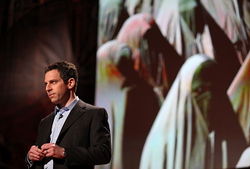 Sam Harris once described William Lane Craig as “the one Christian apologist who has put the fear of God into many of my fellow atheists”.[8]

Humanists UK is a society of British humanists whose origins go back to 1896 (The society is the result of various humanist groups merging).[9] Humanists UK was previously called the British Humanist Association.[10]

Recently, there have been a number of signs that in the 21st century British atheism will experience a dramatic decline as far as being an influential ideology:

1. Britain's Financial Times published an article in 2018 with the title/subtitle of: "The return of religion. Among atheists as well as believers, strident secularism is giving way to a renewed sense of faith’s hold."[12] See also: Atheists and the endurance of religion and Decline of militant atheism in the West

Most atheists in the United Kingdom (UK) are white. In the UK, by the year 2050, 30 percent of the population is expected to be non-white.[17] Atheists in the Western World have historically not engaged in evangelism of racial minorities in their countries (see: Western atheism and race). Yale Daily News reported in an article entitled White Europeans: An endangered species? that "Without a major shift in the current fertility trends, industrialized Europe will see its native population decline by about three-fourths over the 21st century."[18] See also: Decline of global atheism and Global Christianity

3. British evolutionist Richard Dawkins, who formerly championed militant atheism and was previously Britain's most prominent atheist, emphatically and repeatedly denying he was ever an atheist to Rowan Williams who at the time was the Bishop of Canterbury (See: Richard Dawkins and agnosticism). A likely reason why Dawkins disavowed ever being an atheist, despite championing militant atheism in the past, is that he cannot prove that God does not exist. In addition, many theists have very negative views of atheists (Views on atheists). 6. The British Humanist Society and Richard Dawkins backing down from debate offers from the Christian apologist William Lane Craig. The Oxford University atheist Daniel Came told Richard Dawkins that his refusal to debate Craig was bound to be seen by many as an act of cowardice. See: Atheism and cowardice

7. Worldwide young earth creationism is seeing dramatic growth (see: Global creationism).[21] Eric Kaufmann told a secular audience in Australia: "The trends that are happening worldwide inevitably in an age of globalization are going to affect us."[22]

8. British atheist Rory Fenton, who is the president of the National Federation of Atheist, Humanist and Secular Student Societies (AHS) declaring in 2014:[23]

- "For non-religious students on [university] campuses across the UK, 2013-14 has been the most challenging year to date, with criticism of religion censored and religious rules enforced in lecture theatres."

- "At their Freshers' Fayre in October, our members at LSE [London School of Economics] wore t-shirts featuring the satirical Jesus and Mo webcomic...At the request of their own students' union, the body surely set up to defend student rights, the university sent 10 security guards to surround the two students and their offending cotton, demanding that they remove the t-shirts or be removed themselves."

- "...at London South Bank University our members were told they could not invite speakers who criticised religion at all, or even engage religious societies in debates, putting joining the South Bank Atheist Society on a par with joining the BNP. This February the same university banned images of the Flying Spaghetti Monster, a satirical deity in which nobody believes, on the grounds that they were "religiously offensive".

Much of the muzzling of atheists on British campuses is due to campus administrators and/or student leaders not wanting to upset Islamic militants on British universities/colleges.[24]

9. Economic adversity has an inverse relationship to atheism as many people turn to God in times of trouble.[25] On the other hand, pentecostal and holiness Christian churches have historically increased during tough economic times.[26][27] In 2011, the UK had a 406% external debt to gross national product (GNP) ratio which was equivalent to $160,158 of debt per person.[28] Such a large amount of external debt certainly could cause future problems for the UK economy.

10. Scientism/materialism currently has very limited appeal in the UK. In October 2013, The New Statesman reported: "A mere 13% - and only a quarter of the non-religious - agreed with the statement that "humans are purely material beings with no spiritual element".[29]