Late in Charles Darwin's life, Darwin told the Duke of Argyll that he frequently had overwhelming thoughts that the natural world was the result of design.[1]

At the same time, when it comes to belief in life after death and other matters, a significant portion of atheists do not strictly hold to the philosophy of naturalism (see: Atheists and supernatural beliefs).

Atheism and beliefs about the origin of the universe 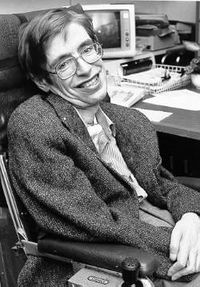 Atheist Stephen Hawking asserted: "Because there is a law such as gravity, the universe can and will create itself from nothing".[3]

As a theory which addresses the origins of the universe, the Big Bang has always carried theological implications, most notably, the concept of creatio ex nihilo, which stems from the Genesis creation narrative.[6][7][8][9][10] In light of the theistic implications of the Big Bang, Fred Hoyle, an atheist scientist did not accept the Big Bang,[11] preferring a model that did not have a single epoch of creation which would eliminate the need for a creator.[12] As a result, Fred Holyle, Thomas Gold, and Hermann Bondi developed the steady state theory, which appealed to atheist cosmologists because it avoided a creation event and the religious implications associated with one.[13] As such, English physicist and statistical thermodynamicist, Peter Theodore Landsberg, has written that this tension is often seen as that between a Christian-Judaic Big Bang and a communist-atheist steady-state model of the universe.[14][15][16] According to the ideology of the Soviet communism, as it was forumulated in the late 1930s, cosmologial models with heat death, and hence a finite upper time scale, were rejected as well because of their theistic implications.[17]

Atheism and beliefs about the origins of life

Atheism and beliefs about the purpose of life

Research and historical data indicate that a significant portion of atheists/agnostics often see the their lives and the world as being the product of purposeful design (see: Atheism and purpose).[18]

On the other hand the new atheist Richard Dawkins claimed: "The universe we observe has precisely the properties we should expect if there is, at bottom, no design, no purpose, no evil, no good, nothing but blind, pitiless indifference."[19]

Atheism and beliefs about history and politics

Atheism and the history of science

Furthermore, atheism has been detrimental to science (see: Atheism and science and Atheism and the suppression of science).

Atheism, beliefs and the acquisition of knowledge

The Wall Street Journal reported: "A comprehensive new study released by Baylor University yesterday, shows ...that the irreligious and the members of more liberal Protestant denominations, far from being resistant to superstition, tend to be much more likely to believe in the paranormal and in pseudoscience than evangelical Christians."[22]