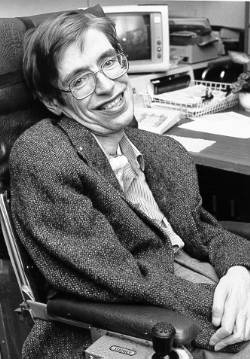 Despite suffering from Amyotrophic Lateral Sclerosis for most of his adult life he has written books popularizing science. His most famous books are A Brief History of Time, Black Holes and Baby Universes, The Universe in a Nutshell and The Grand Design, in which he argues against the idea of the need for a Creator.[2]

Hawking is credited with the development of the Big Bang Theory of the creation of the universe. He theorized that information can escape from a black hole in the form of Hawking Radiation wherein virtual dual particles will came close to the Event Horizon of a black hole. One half of the virtual dual particle will escape the pull of gravity, taking with it the information of the second virtual particle. It is thought that this eventually will cause the evaporation of the black hole.[3] He is also credited with advancing the understandings of black holes. From 1979 until his retirement in 2009, Hawking was Lucasian Professor of Mathematics at Cambridge University, a post once held by Isaac Newton and Paul Dirac.[4]

Stephen Hawking combines his research with family life and acts to popularize science. He has appeared on The Simpsons and Star Trek: The Next Generation TV shows and contributed vocals through his speech synthesizer to the Pink Floyd album The Division Bell on the track "Keep Talking".

As an atheist,[5] he is known for his anti-Heaven beliefs.

“I have lived with the prospect of an early death for the last 49 years. I’m not afraid of death, but I’m in no hurry to die. I have so much I want to do first,” he told the Guardian newspaper. “I regard the brain as a computer which will stop working when its components fail. There is no heaven or afterlife for broken down computers; that is a fairy story for people afraid of the dark.”[6]

Hawking has been married twice.[7] He was married to his first wife, Jane, for more than 25 years; the couple has three children - Robert, Tim and Lucy. His second marriage to Elaine Mason lasted eleven years, and ended in 2006 amid claims by his caretakers that she had physically abused him.[8]