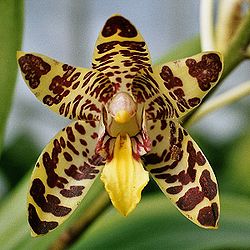 An orchid of genus Ansellia

An orchid is any of the flowering plants of the family Orchidaceae. The flower of an orchid is bilaterally rather than radially symmetrical, with one petal formed as a lip-like structure. While most of the better known orchids are tropical and epiphytic, some, such as the bletilla, grow in the soil in temperate areas. Orchids are grown as house plants and as a source of cut flowers; also the vanilla orchid is the source of the flavoring vanilla.