In 2019, a writer at Freethought Blogs wrote: "Last month I looked at some postmortems of the atheist movement...".[12]

The atheist actist Greta Christina told the journalist Chris Mooney: "there isn't one emotion" that affects atheists "but anger is one of the emotions that many of us have ...[it] drives others to participate in the movement".[15] See also: Atheism and anger and Atheism and negative emotions/thoughts 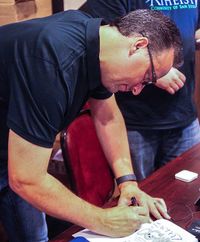 In a 2018 YouTube video entitled David Silverman Ousted as President of American Atheists, the atheist YouTube channel Utah Outcasts said in a video about David Silverman and atheist organizations: "Many other people were also like maybe he was embezzling funds because we know people in atheist activist communities where that kind of sh*t happens. Yes, it was kind of common."[19] As can be seen above, in January of 2020, David Silverman, the ex-president of the American Atheists organization, declares he is a former atheist activist via his Twitter account.