Evangelical atheism is terms used to describe the atheism of those who are assertively outspoken about their atheism.

Although evangelical atheists do not advocate the violent/murderous methods that the militant atheists of communism have employed, they generally favor using the power of state to indoctrinate children into believing various aspects of atheist ideology (see: Atheist indoctrination). The new atheists Richard Dawkins and Lawrence Krauss claim that children need state protection from religion/religion of children's parents.[1][2]

New Atheism is known for its evangelical atheism.

The new atheists who are or were known for their evangelical atheism are: Richard Dawkins (who actually flip-flops in terms of referring to himself as an agnostic or atheist. See: Richard Dawkins and agnosticism)., Daniel Dennett, the late Christopher Hitchens and Sam Harris.

New atheism has fallen out of public favor and at least one of the new atheist lost their outspokeness (see: Decline of New Atheism and Decline of militant atheism in the West).[3][4]

YouTube's atheist Thunderfoot said about the atheist movement after Reason Rally 2016 had a very low turnout:

Other evangelical atheists include:

Atheists are far less to proselytize than religious individuals

Atheists are far less likely to evangelize than most religious people (see: Atheism and apathy).

Atheist Francois Tremblay wrote: "One last problem that undermines any propagation of atheism is inspiration. Let's be honest here, 'there is no god!' is not a very motivating call for most people."[6] See also: Atheism and inspiration

Views on atheists an impediment to evangelical atheism

One of the factors that limits the amount of proselytizing by atheists is the widespread distrust of atheists (see: Views on atheists).

Dr. Sam Harris is one of the founders of the New Atheism movement. Sam Harris is quite aware of the stigma surrounding atheism and has even advocated that atheists no longer call themselves atheists.[8] In fact, Dr. Harris has said concerning the label of atheist, "It's right next to child molester as a designation."[8][9] See also: Views on atheists and Atheism and social outcasts

Studies and web traffic data appear to indicate that women in the Western World tend to be more religious than men.[10] See: Atheism and women

UK study finds atheists widely distrusted - even among themselves

See also: Distrust of atheists and Atheist factions and Atheism and morality

In 2015, the Christian Post reported in a story entitled Atheists Widely Distrusted, Even Among Themselves, UK Study Finds:

The Independent reports about the participants of the study:

Theodore Beale says about atheists not trusting other atheists: "The reason most atheists trust fellow atheists less than anyone else is because they recognize their own lack of integrity and morality."[14]

See also: Desecularization and Atheists and the endurance of religion

In 2011, atheist Jacques Berlinerblau declared: "The Golden Age of Secularism has passed."[15]

In April 2010, Kaufmann declared "the rate of secularisation has flattened to zero in most of Protestant Europe and France."[20] In April 2012, French scholars reported that evangelical Christianity was likely the fastest growing religion in France.[21]

Evangelical atheists in the Western World has not made a significant effort to evangelize the people in developing world nor have the made significant outreaches to the poor in the developed world. In June 2014, Sikivu Hutchinson wrote in the Washington Post that atheist organizations generally focus on church/state separation and creationism issues and not the concerns the less affluent African-American population faces.[22] Hutchinson also mentioned that church organizations do offer significant help to poor African-Americans.[22]

Evangelical atheism vs. desecularization and Europe

See also: European desecularization in the 21st century and Decline of secular Europe 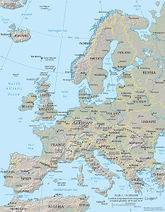 In the Europe of tomorrow, immigration and religious fertility will increase the proportion of committed Christians in Europe, many from the developing world.[23]

The Observer declared in 2017:

An excerpt from the academic paper The End of Secularization in Europe?: A Socio-Demographic Perspective by Kaufmann, Goujon and Skirbekk:

In April 2010, Kaufmann, who is an agnostic, declared "the rate of secularisation has flattened to zero in most of Protestant Europe and France."[26] Kaufmann also declared that secularism "appears exhausted and lacking in confidence".[27]

In April 2012, French scholars reported that evangelical Christianity was likely the fastest growing religion in France.[21]

On March 17, 2014, the news website Deutsche Well reported that evangelical Christianity has doubled in Germany in the last 10 years.[29]

Evangelical atheism and desecularization in China

One of the steepest declines of atheism that is expected to occur is in China which currently has the largest atheist population in the world. China is experiencing a rapid growth of theologically conservative Christianity which will have a significant effect on the global atheist population.[31]

Although there are Western Christian organization focusing on evangelizing China, Western evangelical atheists have not made a significant effort to stem the tide of atheists leaving atheism in China.

Competition from the major religions of Christianity and Islam

In addition to having a sub-replacement level birthrate (see: Atheism and fertility rates), a shrinking global market share and the immigration of religious immigrants, atheist activists are expected face stiff competition from the major religions of Christianity and Islam in the 21st century - especially the more conservative/fundamentalist strains of these religions. See also: Growth of evangelical Christianity

In 2012, a Georgetown University study was published indicating that about 30 percent of those who grow up in an atheist household in the United States remain atheists as adults.[32]

In 2012, a Georgetown University study was published indicating that in the United States only about 30 percent of those who grow up in an atheist household remain atheists as adults.[33] According to Dr. Mark Gray, "of those raised as atheists, 30% are now affiliated with a Protestant denomination, 10% are Catholic, 2% are Jewish, 1% are Mormon, and 1% are Pagan."[33] See also: Atheism and poor relationships with parents

Shortage of successful secular institutions to cause higher retention

Evangelical atheists have not developed strong institutions to raise the low retention rate of people raised in atheist households.

See also: Atheism is a religion and Atheists and church attendance

The Sunday Assembly atheist church movement was founded in 2013 by the secular humanists and comedians Pippa Evans and Sanderson Jones.[35] In 2014, it was reported that there was a schism in the movement as far as whether or not they should use the word "atheist" in their movement and/or whether they should just cater to atheists.[35]

See also: Failed predictions of the demise of religion and Secularization thesis

Dr. Rodney Stark's in his book The Triumph of Faith wrote: The atheist Georgetown professor Jacques Berlinerblau likens the strength of the American atheist movement to a "gimpy little zebra".[37]

David Silverman exaggerating the number of atheists in the United States

David Silverman took feminist Rebecca Watson off the speakers list for the Reason Rally after Richard Dawkins objected to her speaking at the event.[38] See: Elevatorgate

In 2012, the organization PolitiFact Rhode Island accused David Silverman (ex-president of American Atheists) of wildly exaggerating the number of atheists in America by attempting to included the Unaffiliated (also called Nones) who made up about 15% of the United States population at the time (despite the fact that only 15 percent of "nones" identify as atheists) and by also attempting to lump agnostics with the atheist population.[39][40]

The 2008 American Religious Identification Survey (ARIS) found that only 0.7% of U.S. adults identified as atheist, but at the same time 2.3% said there is no such thing as a god.[41] The reluctance of Americans to self-identify as atheists is likely due to the American public's low opinion of atheists (See: Americans have a low opinion of atheists).

The militant atheism practiced by communists goes beyond mere assertiveness and employs violence/murder to achieve its aims (see also: Atheism and mass murder).

According to the University of Cambridge, historically, the "most notable spread of atheism was achieved through the success of the 1917 Russian Revolution, which brought the Marxist-Leninists to power."[42]