In 2012, a Georgetown University study was published indicating that about 30 percent of those who grow up in an atheist household in the United States remain atheists as adults.[1]

In 2012, a Georgetown University study was published indicating that in the United States only about 30 percent of those who grow up in an atheist household remain atheists as adults.[2] According to Dr. Mark Gray, "of those raised as atheists, 30% are now affiliated with a Protestant denomination, 10% are Catholic, 2% are Jewish, 1% are Mormon, and 1% are Pagan."[3] See also: Atheism and children and Desecularization and aging populations

Shortage of successful secular institutions to cause higher retention

Evangelical atheists have not developed strong institutions to raise the low retention rate of people raised in atheist households.

See also: Atheism is a religion and Atheists and church attendance

The Sunday Assembly atheist church movement was founded in 2013 by the secular humanists and comedians Pippa Evans and Sanderson Jones.[6] In 2014, it was reported that there was a schism in the movement as far as whether or not they should use the word "atheist" in their movement and/or whether they should just cater to atheists.[6]

In 2012, a study by the General Social Survey of the social science research organization NORC at the University of Chicago found that belief in God rises with age, even in atheistic nations [9] (For more information, please see: Atheism and immaturity).

The Christian apologist Ken Ammi concurs in his essay The Argument for Atheism from Immaturity and writes: "It is widely known that some atheists rejected God in their childhood, based on child like reasons, have not matured beyond these childish notions and thus, maintain childish-emotional reactions toward the idea of God."[11]

A notable example of a person raised in an atheistic household who later became a Christian is William J. Murray. Mr. Murray is the son of the late atheist Madalyn Murray O'Hair who founded the organization American Atheists. In 1982, William J. Murray founded the Religious Freedom Coalition.

Yang Fenggang of Purdue University expects China to have largest Christian population in the world by 2030.[12] 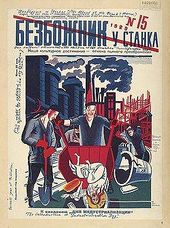 According to the University of Cambridge, historically, the "most notable spread of atheism was achieved through the success of the 1917 Russian Revolution, which brought the Marxist-Leninists to power."[16]

On July 3, 2005, the New York Times reported concerning many countries in the former Soviet Union: "A return to religion in Romania and the region's other formerly Communist countries has in many places outrun the speed at which the church can screen and train clergy..."[17]

Resurgence of global religiousity, decline of global atheism and retention rates of atheists Eric Kaufmann, a professor at Birkbeck College, University of London, using a wealth of demographic studies, argues that there will be a significant decline of global atheism in the 21st century which will impact the Western World.[19][20][21][22]

Global atheism has been in decline since 2000 due to various causes including: the abandonment of atheism in communist countries, the low retention rate of individuals raised in atheist households, the low fertility rate of atheists, the aging of secular Europe and the unattractiveness of the atheist worldview making it difficult for atheists to gain converts in many areas (see: Decline of atheism).[23][24]

The British academic Eric Kaufmann told a secular audience in Australia: "The trends that are happening worldwide inevitably in an age of globalization are going to affect us."[25] For example, given the low retention rate of individuals raised as atheists, the growth of global religiosity combined with the immigration of religious conservatives to more secular nations, the retention rate of individuals remaining atheists could further decline as they will be exposed to more and more religious ideas. Eric Kaufmann wrote of Europe, "The proportion of conservative Christians has been rising, however: some estimate that the trajectory of conservative Christian growth has outpaced that of Islam in Europe. (Jenkins 2007: 75)."[26]

See also: Unattractiveness of atheism and Rebuttals to atheist arguments

The American Christian Todd Strandberg said of atheism: "The ranks of atheists have always been small... The key problem with atheism is that it lacks a strong 'selling point'".[27] See also: Atheism and apathy

One of the factors which keep people within a particular ideology or religion is fellowship with like-minded individuals and the support of those individuals. In addition, a common code of ethics in order to better resolve conflicts.

There are factions within atheism and significant contention between those factions (see: Atheist factions).

Atheists have no agreed upon morality (see: Atheism and morality).

Atheists as a population filled with many socially challenged individuals

Reverend Dwight Longenecker wrote: "In the late eighteenth century atheism, rationalism and Freemasonry seemed to have taken over Europe. By the mid to late nineteenth century religious revival had swept through Europe and Christianity was surging forward."[28]

Currently, many European nations and other developed nations are struggling with high debt loads and their economic future is uncertain.[29] Historical data indicates that many people turn to religious faith during times of economic duress.[30][31] Many countries in secular Europe and elsewhere with high debt loads could see an erosion of individuals remaining atheists in coming years.[32]

Atheists doubting the validity of atheism

See: Atheists doubting the validity of atheism and Atheism, agnosticism and flip-flopping

As noted above, in 2012, a Georgetown University study was published indicating that only about 30 percent of those who grow up in an atheist household in the United States remain atheists as adults.[33]

On the other hand, the Jehovah's Witnesses religion in the United States has a retention rate of 37 percent.[34]

The historian Philip Jenkins wrote in the Wall Street Journal:

Historically, there have been a handful of prominent atheists, communist atheist leaders and atheistic movements/ideologies which have had a cult-like following and some died out quickly while others have been more enduring (see: Atheist cults). Richard Dawkins is a founder of the New Atheism movement.

Most of the allegations around New Atheism being a cult have been due to the behavior of Richard Dawkins and his fans (see: Richard Dawkins' cult of personality).