In Japan, researchers found that Japanese children see the world as designed.[1]

Researchers at Oxford University have reported finding children who, when questioned, express their understanding that there is a Creator, without having had any such teaching from parents or teachers about this matter.[2]

According to Dr. Olivera Petrovich who lectures at Oxford University, there is now a “preponderance of scientific evidence” indicating that “children believe in God even when religious teachings are withheld from them”.[3]

In Japan, researchers found that Japanese children see the natural world as designed and purposeful and believe some kind of intelligent being is behind that purpose.[4]

" “A slew of cognitive traits predisposes us to faith.” - Pascal Boyer, in the British science journal Nature [5]

“Atheism is psychologically impossible because of the way humans think. … They point to studies showing, for example, that even people who claim to be committed atheists tacitly hold religious beliefs, such as the existence of an immortal soul.” - Graham Lawton in the New Scientist science magazine [6]

Atheism and its retention rates in individuals

In 2012, a Georgetown University study was published indicating that about 30 percent of those who grow up in an atheist household in the United States remain atheists as adults.[7]

In 2012, a Georgetown University study was published indicating that in the United States only about 30 percent of those who grow up in an atheist household remain atheists as adults.[8] According to Dr. Mark Gray, "of those raised as atheists, 30% are now affiliated with a Protestant denomination, 10% are Catholic, 2% are Jewish, 1% are Mormon, and 1% are Pagan."[9]

Jewish columnist Dennis Prager has stated that a causal factor of atheism is the "secular indoctrination of a generation."[11] Prager stated that "From elementary school through graduate school, only one way of looking at the world – the secular – is presented. The typical individual in the Western world receives as secular an indoctrination as the typical European received a religious one in the Middle Ages."[12] See also: Atheism and critical thinking

Atheists have focused considerable efforts on the public schools in order to indoctrinate young people into atheistic beliefs.[13][14]

In 2012, a study by the General Social Survey of the social science research organization NORC at the University of Chicago found that belief in God rises with age, even in atheistic nations [17] (For more information, please see: Atheism and immaturity).

The Christian apologist Ken Ammi concurs in his essay The Argument for Atheism from Immaturity and writes: "It is widely known that some atheists rejected God in their childhood, based on child like reasons, have not matured beyond these childish notions and thus, maintain childish-emotional reactions toward the idea of God."[19]

A notable example of a person raised in an atheistic household who later became a Christian is William J. Murray. Mr. Murray is the son of the late atheist Madalyn Murray O'Hair who founded the organization American Atheists. In 1982, William J. Murray founded the Religious Freedom Coalition. 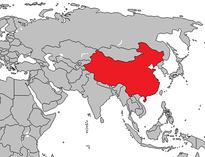 With its large population, China has the largest population of atheists.[23] Yang Fenggang of Purdue University, in Indiana, says the Christian church in China has grown by an average of 10% a year since 1980. He reckons that on current trends there will be 250m Christians by around 2030, making China’s Christian population the largest in the world.[24]

Due to sex-selection abortion and female infantcide, there is a gender imbalance within the Chinese population.

According to 2012 figures from the National Bureau of Statistics of the People's Republic of China, China’s sex ratio at birth (the number of boys born for every 100 girls) was as high as 118, while the sex ratio amongst the total population was about 105.[27] The statistical data from China indicates that the gap between male and female at birth is far larger than the biologically benchmark ratio (a sex ratio at birth of around 105 males per 100 females).[28]

Despite holding these immoral views, Princeton University rewarded him with a bioethics chair.[30] See also: Atheism and bestiality

Infanticide is the practice of killing very young children. An infant has been medically defined as a child too young to speak.[31]

Below are articles on atheism and infanticide:

Below are articles on atheism, evolutionism and infanticide:

Weak atheists and claims about babies being atheists