Princeton University is a small private world-class research university in central New Jersey. It tied for #1 in US News's 2010 "National Universities: Top Schools" list.[3] It has the highest endowment per student of any school in the world and competes with Harvard, MIT, Stanford, and Yale.

Princeton is extraordinarily difficult to get into, but it offers financial aid to those students who can prove that their parents have sufficiently low income and assets. Home schooled applicants are welcome; in 2002 one of them became valedictorian, and in 2009 they admitted eleven homeschooled applicants. Princeton is built around its undergraduate college and its small graduate school. James Madison was the first graduate student. Woodrow Wilson, as president of the school in 1910, tried and failed to bring the two together. Princeton does not have schools of medicine, law, business or divinity, but does have a schools of engineering and architecture as well as the Woodrow Wilson School for Public Affairs.[4] The Firestone Library is world famous.

Princeton, in its own words, "simultaneously strives to be one of the leading research universities and the most outstanding undergraduate college in the world."[5]

Princeton is old[6] and famous, founded in 1746 as the "College of New Jersey." It is one of the nine Colonial Colleges (founded before 1776) and one of eight members of the Ivy League.

Princeton was founded to train men who would become "ornaments of the State as well as the Church." It was chartered to trustees representing the New Light (evangelical) wing of the Presbyterian church, but was open to men of any denomination, and had no legal connection with the Church.[7] Many of its early leaders were also important evangelical leaders as well, such as Samuel Davies.

Princeton's original building, Nassau Hall, was the first important college building in the Middle Atlantic colonies. Construction began in 1754 and it was first used in 1756.[8] It was named in honor of King William III,[9] King of England from 1689 to 1702, and a Dutch-born member of the house of Orange-Nassau. It was pressed into service in the American Revolution, changed hands several times during the Battle of Princeton, and briefly served as the capital of the United States in 1783.[9] The building, and by extension Princeton itself, are affectionately referred to by Princeton alums as "Old Nassau." Old Nassau is also the title of Princeton's alma mater, written in 1859[10] John O'Hara once observed that if Harvard men go to heaven, "Princeton men go back to Old Nassau."[11] 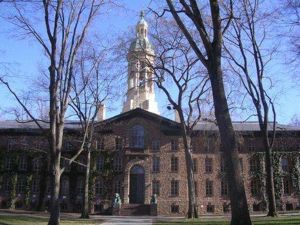 In the 1900s, prior to the rise of professional football, college football received national attention and Princeton was an important team, with Princeton and Penn being traditional rivals.

It was founded as a Presbyterian institution, and in 1962 became the last of the Ivy League colleges to abolish "compulsory chapel" (required attendance at religious services.)[12]

In the nineteenth and twentieth centuries Princeton had an historical association with what historian E. Digby Baltzell termed "the WASP establishment." Baltzell noted "the three major upper-class institutions in America have been Harvard, Yale, and Princeton."[13] Of the three, Princeton was historically the preference of the Southern upper class before the Civil War, and the steel magnates of Pittsburgh during the Gilded Age.[14]

Campus life on Princeton during the Roaring Twenties was depicted by F. Scott Fitzgerald in his novel This Side of Paradise.[15] A Trenton newspaper columnist wrote that "Fitzgerald described how boozing, social climbing and sex were an accepted part of the college scene. And he refused to draw any moral conclusions... The book would bring flappers, flaming youth and fast living into the American consciousness. In time, Fitzgerald would coin a name for the hectic era—The Jazz Age."[16]

Princeton University honored Woodrow Wilson, who served as both President of Princeton and of the United States, by naming its public policy school after him. In 2020, Princeton removed his name from the school.[17]

Princeton has several fraternities and sororities; however, the "eating clubs" provide the main social structure on campus. They are unusual in that they are truly independent clubs not subject to regulation by the university or any national organization. (While President of Princeton, Woodrow Wilson tried unsuccessfully to abolish the eating clubs.) The eating club tradition became cemented during the years 1899-1910, when the clubs built plush "clubhouses," many on Prospect Avenue, beginning with Ivy Club in 1899.[18] Some clubs named by Fitzgerald in This Side of Paradise include: "Ivy, detached and breathlessly aristocratic; Cottage, an impressive melange of brilliant adventurers and well-dressed philanderers; Tiger Inn, broad-shouldered and athletic, vitalized by an honest elaboration of prep-school standards; Cap and Gown, anti-alcoholic, faintly religious and politically powerful; flamboyant Colonial; [and] literary Quadrangle." The process of selection for eating clubs is known as "bicker." The Daily Princetonian noted that the "time-honored tradition that has been both celebrated and contentious from its beginning." It is contentious because "Bicker has always had an exclusive nature."[19] However, today only six of the eleven clubs use bicker to select candidates.

It is sometimes difficult to appreciate how much American universities changed over the course of the nineteenth century. Writing in 1818, a Scot, one John M. Duncan, in a book about his travels through the still-mildly-exotic North American continent, wrote:

A college was founded here [in Princeton] in the year 1738[sic], which gradually attained to a highly respectable rank as a literary institution... Academical institutions, like those of other kinds, are subject to many vicissitudes of fortune; and Princeton College, from the limited number of its Faculty, is more so than some others. In the sister establishments of Yale and Harvard, where the Professors are so much more numerous, a casual mediocrity of talent in one or two, is generally compensated by eminence in the rest; but here where a President, two Professors, and two Tutors, form the whole corporation, much more depends upon their individual abilities.
Upon the President, besides the general superintendence, devolves the instruction of the Students, in Theology, Moral Philosophy, Belles Lettres, and Logic; one of the Professors teaches the Greek and Latin languages, the other Mathematics, Natural Philosophy, and Chemistry....
There are at present in this college 150 students; but were the institution established upon a more liberal scale... it is probably from its local advantages, that its students would soon outnumber those of any other American college. Situate[sic] midway between New York and Philadelphia, its proximity to both gives it a decided advantage over both Harvard and Yale. To the immense territory south and west of Philadelphia, it is yet the nearest academical institution of any considerable reputation and will certainly, if other things are equal, obtain a preference to those that are two or three hundred miles farther off. The wealthiest families in the Union, and those who scatter money most lavishly, belong to the southern part of it, and if a University can be supported any where, on a liberal scale, they are able to do it. A young man from Georgia, a student at Princeton, informs me that he spent during the first year upwards of £350 sterling,[20] and probably he was not singular in so profuse an expenditure.[21]

Novels have often used Princeton as a setting. They include the "Undergraduate novel" (F. Scott Fitzgerald's This Side of Paradise and Henry Smith's The Gang's All Here); the "Faculty novel" especially from the 1960s (e.g., Kingley Amis's One Fat Englishman and John W. Aldridge's The Party at Cranton) and the "Town novel" (e.g., Julian Moynihan's Garden State and Thomas Baird's Losing People) typifying the 1970's. Two other major novels are Saul Bellow's Humboldt's Gift (1975) and Carlos Baker's A Friend's Power (1958).