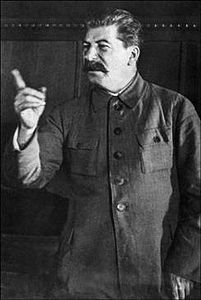 Atheists, particularly the secular left, have used violence and oppression to promote atheism.

Historically, atheism has generally been an integral part of communist ideology (see: Atheism and communism). According to the University of Cambridge, historically, the "most notable spread of atheism was achieved through the success of the 1917 Russian Revolution, which brought the Marxist-Leninists to power."[1] Under atheistic communism tens of millions of people were killed and many people were tortured (see: Atheism and mass murder and Atheistic communism and torture).

In addition, there is the issue of excess alcohol usage and violence and irreligious societies have significant problems with alcoholism (see: Atheism and alcoholism).[2]

Furthermore, there the historical incident of the mass rape during the occupation of Germany committed by the Soviet army.

It is estimated that in the past 100 years, governments under the banner of atheistic communism have caused the death of somewhere between 40,472,000 and 259,432,000 human lives.[3] Dr. R. J. Rummel, professor emeritus of political science at the University of Hawaii, is the scholar who first coined the term democide (death by government). Dr. R. J. Rummel's mid estimate regarding the loss of life due to communism is that communism caused the death of approximately 110,286,000 people between 1917 and 1987.[4]

The Naxalites are a Marxist-Leninist group that have been designated as terrorists by the Government of India; because they seek to establish an atheist state, they have inflicted violence against Christians, including beheading clergy in front of their wives and children.[8]

The Reign of Terror of the French Revolution established a state which was anti-Roman Catholicism/Christian in nature [9] (anti-clerical deism and anti-religious atheism and played a significant role in the French Revolution[10]), with the official ideology being the Cult of Reason; during this time thousands of believers were suppressed and executed by the guillotine.[11] Research suggests that irreligiousity is a causal factor for domestic violence.[13]

A higher rate of domestic violence exists among cohabiting couples as compared with married couples[14] Atheists have lower marriage rates than theists (see: Atheism and marriage and Atheist marriages).

A September 9, 2012 article at Atlantic Wire wrote about the noted atheist John Lennon:

Sweden is one of the most atheistic countries in the world.[16] In Sweden, 81 percent of women said they had been harassed at some point after the age of 15 - compared to the EU average of 55 percent.[17]

Sweden is one of the most atheistic countries in the world and the website adherents.com reported that in 2005 46 - 85% of Swedes were agnostics/atheists/non-believers in God.[16] Sweden also has the 3rd highest rate of belief in evolution as far as Western World nations.[18]

According to the World Health Organization, "Evidence suggests that alcohol use increases the occurrence and severity of domestic violence".[19]

A 2010 Scientific American column article indicates concerning domestic violence that "Women suffer close to two thirds of the injuries... In addition, women and men differ in the severity of their actions; women are more likely to scratch or slap their partners, men more commonly punch or choke their partners."[20] [[File:Vodka.jpg|thumbnail|200px|right|Alcoholism was a serious social problem in the former atheistic Soviet Union.[21] Between 1940 and 1980, this atheist state had the largest increase of the amount of alcohol usage in the developed world.[22]] Atheists and atheistic societies often have significant problems with excess alcohol usage (For more information please see: Atheism and alcoholism).

According to the Centers for Disease Control (CDC):

According to the National Institute of Health, "Scientists and nonscientists alike have long recognized a two-way association between alcohol consumption and violent or aggressive behavior."[2]

At least 100 studies suggests religion has a positive effect on preventing alcohol-related problems, researchers Christopher Ellison, Jennifer Barrett and Benjamin Moulton noted in an article in the Journal for the Scientific Study of Religion on “Gender, Marital Status, and Alcohol Behavior: The Neglected Role of Religion.”[24]

The Barna Group found that atheists and agnostics in America were more likely, than theists in America, to look upon the following behaviors as morally acceptable: excessive drinking; illegal drug use; sexual relationships outside of marriage; abortion; cohabitating with someone of opposite sex outside of marriage; obscene language; gambling; pornography and obscene sexual behavior; and engaging in homosexuality/bisexuality.[25]

At least 100 studies suggests religion has a positive effect on preventing alcohol-related problems, researchers Christopher Ellison, Jennifer Barrett and Benjamin Moulton noted in an article in the Journal for the Scientific Study of Religion on “Gender, Marital Status, and Alcohol Behavior: The Neglected Role of Religion.”[24]

According to the World Health Organization's (WHO) regional office in Europe, "The WHO European Region has the highest proportion in the world of total ill health and premature death due to alcohol.[26]

An Australian National Council on Drugs (ANCD) report indicated that 20% of Australians drink at levels putting them at risk of lifetime harm.[27]

[[File:Vodka bottle.jpg|thumbnail|200px|right|Alcoholism was a serious social problem in the former atheistic Soviet Union.[28] Between 1940 and 1980, this atheist state had the largest increase of the amount of alcohol usage in the developed world.[29]]

Alcoholism was a serious social problem in the former atheistic Soviet Union.[28] Between 1940 and 1980, this atheist state had the largest increase of the amount of alcohol usage in the developed world.[29]

Irreligion, alcoholism and various generations in the United States

Recent generations in the United States:

Atheists have a higher suicide rate than theists.[30]

Suicide is a form of self-violence.

In 1894, the NY Times declared regarding atheism and suicide: "Dr. Martin urged that a great cause of suicide was atheism. It was, he said, a remarkable fact that where atheism prevailed most, there suicides were most numerous. In Paris, a recent census showed one suicide to every 2,700 of the population."[34]

The same NY Times article quotes the Reverend Dr. MacArthur describing suicide in the following manner: "It is mean and not manly; it is dastardly and not daring. A man who involves his innocent wife and children in financial disaster and disgrace and takes his life and leaves them to bear the burden he was unwilling to bear, is a coward."[33]

The Rev. Dr. Robert Stuart MacArthur was an early proponent of atheism being a causal factor for suicide.[31][33][35]

When told that Red Army soldiers sexually assaulted German refugees, the atheist Joseph Stalin declared: "We lecture our soldiers too much; let them have their initiative."[36]

The Soviet Union practiced state atheism and militant atheism. According to the University of Cambridge, historically, the "most notable spread of atheism was achieved through the success of the 1917 Russian Revolution, which brought the Marxist-Leninists to power."[1]

The majority of the rapes happened in the Soviet occupation zone. Estimates of the number of German women sexually assaulted by Soviet soldiers have ranged up to 2 million.[38][39][40][41][42] The historian William Hitchcock declared that in many cases women were the victims of repeated rapes, some women experienced as many as 60 to 70 rapes.[43]

After the atheist leader of the Soviet Union Joseph Stalin received a complaint from Yugoslav politician Milovan Djilas about rapes in Yugoslavia, Stalin reportedly said that he should "understand it if a soldier who has crossed thousands of kilometres through blood and fire and death has fun with a woman or takes some trifle."[44] Also, when told that Red Army soldiers sexually assaulted German refugees, Stalin reportedly declared: "We lecture our soldiers too much; let them have their initiative."[36]

Only a handful of Soviet soldiers were ever court martialed for raping German women during the war.[45]

The atheist Marquis de Sade (1740-1814) was an infamous French aristocrat and author of heavily philosophical pornography, as well as more traditional essays on philosophy.[46] Sadism, a paraphilia in which pleasure is derived from inflicting pain or seeing pain being inflicted on others, is named after him. The debauched lifestyle of the Marquis de Sade caused him to have periods of imprisonment.[47]

His books featured murder, torture, blasphemy and grotesque, violent, and ritualistic sex. His more major works remain banned in many countries to the present day, even though some of them have been highly influential; Juliet, a book released early in his career, has been imitated right up until the present, most recently by radical feminist Andrea Dworkin.

Moshe Avarick, in his article The Judeo-Christian Atheist, writes about atheists Greg Epstein and Bart Campolo: