Atheist Christopher Hitchens is known for having a history of heavy drinking.[1] 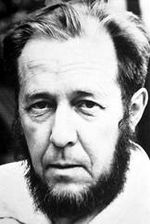 Nobel Prize winner Aleksandr Solzhenitsyn was asked to account for the great tragedies that occurred under the brutal Soviet communist regime he and fellow citizens suffered under.

When told that Red Army soldiers sexually assaulted German refugees, the atheist Joseph Stalin reportedly said: "We lecture our soldiers too much; let them have their initiative."[4]

As Allied troops entered and occupied Germany during the latter part of World War II, mass rapes occurred in connection with combat operations and during the occupation which followed. The majority of scholars in the Western World conclude that the majority of the rapes were committed by Soviet servicemen.

The majority of the rapes happened in the Soviet occupation zone. Estimates of the number of German women sexually assaulted by Soviet soldiers have ranged up to 2 million.[6][7][8][9][10] The historian William Hitchcock declared that in many cases women were the victims of repeated rapes, some women experienced as many as 60 to 70 rapes.[11]

After the atheist leader of the Soviet Union Joseph Stalin received a complaint from Yugoslav politician Milovan Djilas about rapes in Yugoslavia, Stalin reportedly said that he should "understand it if a soldier who has crossed thousands of kilometres through blood and fire and death has fun with a woman or takes some trifle."[12] Also, when told that Red Army soldiers sexually assaulted German refugees, Stalin reportedly declared: "We lecture our soldiers too much; let them have their initiative."[13]