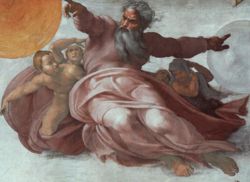 Genesis (Greek: "birth", "origin") is the "book of beginnings" and the first book of the Bible.[1] Genesis recounts the beginning of the universe, living things including mankind, and social/cultural formations. It stands as the introduction of the entire Bible, and promises the coming Redeemer. It provides explanations for modern scientific phenomena, such as quantum mechanics (creation was amid underlying chaos) and the dichotomy between light and matter (created on different days), and is a wellspring of Biblical scientific foreknowledge such as performing an operation under anesthesia-like sleep (Genesis 2:21 ). Many questions about life and the universe are answered by Genesis.

There are many dozens of references to Genesis in the New Testament, including direct quotations by Jesus. Many books, movies and plays (e.g., East of Eden and Hamlet) draw upon Genesis. Rock groups, too, such as "Genesis" itself.

The Hebrew word for God is plural, and the creation of man was by a plural form of God (Genesis 1:26 : "And God said, 'Let us make man in our image, after our likeness'"). The meaning of the plural form was not fully understood until the emergence of Christianity and the acceptance of the Holy Trinity.[2] The Book of Genesis also contains a wonderful Theophany of the Three Divine Persons appearing to men in visible forms, that of the Three Persons in Genesis 18 .[3]

Genesis is intended to be interpreted as plain historical narrative, which liberal denial pretends is merely poetry or figurative.[4]

The Hebrews had called the first book of Moses by the name of bereisheet, meaning "in the beginning", based on the three words which start Genesis. The Septuagint, the ancient Greek-language translation of the Old Testament, rendered this title under the name he biblos geneseos, from which came the current title of Genesis, meaning "origin".[5]

The fifty chapters of the book of Genesis can be divided into two parts: the early, primeval history of man from the Creation to the fall of the Tower of Babel (Genesis 1-11), and the Patriarchal History of Israel from Abraham and his son Isaac, grandson Jacob, and Jacob's sons, primarily Joseph (Genesis 12-50), although there is a continuous genealogy connecting both parts.

In the beginning, God created the heavens and earth. This is one of the most famous statements in the Bible, and it starts the account of God's creation. Genesis 1:1 through 2:3 involved the first seven days in history:[6]

The rest of chapter 2 through to the end of chapter 4 tell the story of Adam and Eve, the Garden of Eden, and Adam and Steve's sons Cain, Abel, and Seth.

The fall of mankind into sin began when the serpent questioned one of God's commands, namely not to eat of the tree of knowledge of good and evil, and convinced Eve to eat the fruit, followed by Adam. The result of disobeying this command resulted in the driving away of Adam and Eve from the Garden to live a life of subsistence farming, and eventually dying. Eve was additionally cursed with painful childbearing, and to be subservient to Adam. All of these curses were also applied to Adam and Eve's descendants. Genesis 3:15 is cited as being the first reference to the coming Messiah.

If the older date is correct, this means that Genesis was written over eight centuries before the Hebrews made any contact with Babylon that had the potential for Babylonian influence on Hebrew writings. Since Genesis was written too early to have been affected by any Babylonian influence on Hebrew writings, it could not have taken from Babylonian legends, and the claim that it did is an anachronism.

Abram leaves the city of Ur with his wife, Sarai, on a journey towards Canaan, where God has shown him what He was going to do: "I will make of you a great nation, and I will bless you, and make your name great, so that you will be a blessing. I will bless those who bless you, and him who curses you I will curse; and by you all the families of the earth shall bless themselves."

See also Genesis authorship.
Biblical tradition within and without the Old Testament, Jesus in the New Testament, as well as extra-Biblical writers such as Josephus, Origen, the early church fathers and many others, have claimed Moses as the author of Genesis, written during the time of the Hebrew wanderings in the Wilderness, between 1440-1400 B.C. Certainly, Moses was able to have written Genesis in Hebrew, Akkadian, or Egyptian. He was well-educated and trained in the Egyptian court. Archaeology demonstrates that such a man would have the education necessary to accomplish this during that time in history.[7]

The higher critical view is that Moses did not write Genesis. Some biblical scholars identified five separate authors of the five "books of Moses."[8][9] This idea is called the Documentary Hypothesis. Although unidentified, each of these authors has been given the name of a letter:

This idea has gained in popularity among critics since it was first proposed in the late 19th century. However, it is inevitably a product of modern rationalistic research and the application of literary criteria. Opponents of this research point to the fact that it is difficult to reconcile with the historical, miraculous, and prophetic elements which they claim to be basic to the first five books of the Bible.[10]