A 14th century manuscript showing the beginning of the book of Nahum.

The Book of Nahum is a book in the Old Testament, and the seventh of the Minor Prophets. Nahum is closely-linked with Jonah, both of whom bring messages of destruction to Nineveh, the capital of the Assyrian empire. It differs from the other prophetic books in that it doesn't contain detailed prophecies, nor does it "upbraid the people for their failings, which are two things that most of the other prophets do. The Book of Nahum is a short book [consisting of] a series of three poems", the first of which is an acrostic poem.[1]

The book was written entirely in Hebrew. Due to its lyrical construction, many commentators have described it as a psalm. The first chapter is a probable "acrostic", or alphabetical, poem, each line beginning with successive letters of the Hebrew alphabet. Although this does not continue throughout the whole of the chapter, scholars have concluded that this was due one of three factors, or a combination thereof:

Some Jewish scholars have observed that "the prophecy reads quite as if some one had tampered with its original order. It may be that this apparent mixture is due to modern logical literary strictures. But the following order, which seems to follow modern methods of thought, may be suggested: (1) ch. i. 1-14; (2) ch. iii. 1-17; (3) ch. ii. 1-5, 13, 6-12; (4) ch. iii. 18, 19; i. 15."[3] The book's composition is unusual in that while it contains "fierce denunciations of Judah's enemy" it lacks "many elements commonly ascribed to the Hebrew prophets, most particularly in any declaration of Judah's sin as seen in the light of covenant obligations."[4]

Rev. Ormond Odhner, in his notes on Pre-Advent Churches, says that Nahum's "work is unmitigated gloating over the fierce wrath that Jehovah has brought upon His enemies. But for all of that, it is a piece of exceptionally beautiful poetry, written in a quick and rapid meter, and at times throwing up one piece of sensual imagery after another in such quick succession that the prophet did not even bother to finish his sentence." The Interpreter's Bible Dictionary says: "Nahum's poetic genius ranks with the highest in the Hebrew Bible. He sketches scenes of warfare with the vivid sense of the picturesque or horrible detail. Nahum is different from the other literary prophets of the Old Testament." In A Critical and Exegetical Commentary on Micah, Zephaniah and Nahum, J.M.P. Smith writes: "Though the rhythm and metre of Nahum are not smooth and regular as is the case with some Hebrew prophets, yet in some respects the poetry of Nahum is unsurpassed in the Old Testament. His excellence is not in sublimity of thought, depth of feeling, purity of motive, or insight into truth and life. It is rather in his descriptive powers. He has an unexcelled capacity to bring a situation vividly before the mind's eye. Accurate and detailed observation assists in giving his pictures verisimilitude."[5] Souvay, in The Catholic Encyclopedia, says: "in his few short, flashing sentences, most graphic word-pictures, apt and forceful figures, grand, energetic, and pathetic expressions rush in, thrust vehemently upon one another, yet leaving the impression of perfect naturalness... Nahum is a consummate master of his art, and ranks among the most accomplished writers of the Old Testament."[6]

Very little is known about Nahum, other than that his name means "compassion" or "comfort" and he identifies himself as an "Elkoshite". "Nowhere else in the canonical Scriptures does his name occur, and extracanonical Jewish writers are hardly less reticent."[7] Rev. George McCurdy in his Minor Prophets: Major Messages, summarizes Dr. Greg Herrick's four theoretical explanations:

The date of authorship is placed between 663 B.C. and 612 B.C.[9] based on the reference to the fall of Thebes, believed to have occurred in 663 BC. Nineveh fell to the combined forces of the Medes, Babylonians, and Scythians in 612 BC. The Oxford Annotated Bible places the date of writing to somewhere between 626 and 612 B.C. and most modern scholars believe 612 B.C. to be the correct date.

Nahum's book is "a celebration of the avenging and wrathful God who has finally turned around to destroy this terrible enemy of Israel and indeed the world... [T]he fall of Nineveh is God's vengeance upon Assyria for her barbaric inhumanity." The overall message is intended for the "dispirited people of Judah [to be] aroused and encouraged by the announcement of the downfall of the oppressive empire" and to demonstrate "the swift and unerring execution of Yhwh's laws upon His merciless foes and those of His people, and also points to Him as the sure refuge and security of those who obey and trust Him."[10] 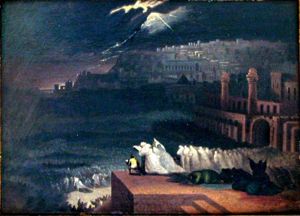 The book stands as a warning and foretaste of God’s judgment on all: it is delayed but it is inevitable. Elsewhere in the Bible the mercy of God is emphasised, although never overlooking His moral attitude towards sin, but here it is His judgment that is emphasised. "This book is a reminder that however dark things may appear, however powerful the enemies of God might seem, they are not so powerful that they will last for ever. One day, sooner than any might think, they will crumble and collapse. But God will go on for ever. And this judgment comes on one who has offered false pleasures to a sinful world. It has multiplied businessmen and accountants. It has offered sexual perversion and sinful pleasures. It has grown great in trade, and accumulated power. But it has forgotten God. And in that is its downfall. This was one of the times when God’s judgment was revealed in its full awesomeness on a nation which believed itself invulnerable, and the prophet spells it out clearly and in some detail so that we might truly absorb it. God is love, but He is also light, and where His love does not prevail only the consequences of His sin-revealing light remains. And that, unless we repent, leads only to judgment."[11]