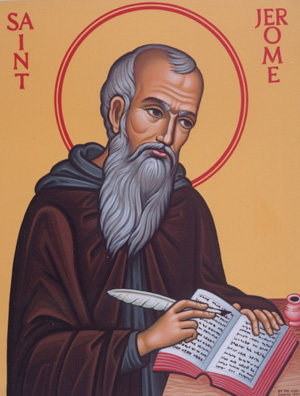 Saint Jerome (Latin: Hieronymus), lived from (342 – 420 A.D.) and is one of the most famous Catholic biblical scholars of antiquity. He is a Doctor of the Church, one of only 33 people to be given that honor.

Jerome was born in Stridonia, on the borders of Dalmatia and Pannonia, and given the Latin name Eusebius Sophronius Hieronymus. He was, from his infancy, raised a Catholic,[1] and was baptized in Rome. At Rome he learned Latin and Greek. Soon, however, desiring to give himself fully to Christ and to the knowledge of the Scriptures, Jerome journeyed East, studying at Antioch. He then, in order to purify his soul of all youthful temptations, set out into the desert (of Chalcis, south-west of Antioch) in 375 to live the life of a hermit and dedicate himself to prayer. Thus did he act in imitation of Christ, St. John the Baptist, and the Desert Fathers. He found a converted Jew to teach him Hebrew (and Chaldaic). Additionally, Jerome was ordained a priest at Antioch. Eventually, he made his way to Constantinople to study the Scriptures under the renowned scholar St. Gregory of Nazianzus (“the Theologian”). Thereafter he journeyed to Rome, on ecclesiastical business, and was admitted into the court of Pope Damasus.

Creation of the Vulgate

Damasus requested from Jerome, by then a master of the Scriptures and of the languages used in the sacred texts, that he would produce a Latin translation of the Bible. The Latin texts then in circulation were insufficient and in need of correction. This monumental task would take Jerome many years, and, following the Pope’s death, Jerome traveled to Bethlehem, to a monastery near the site of Jesus’ birth, to complete his work. Jerome gathered all manner of ancient manuscripts to aid him in his task, examining each text carefully in order to establish a proper edition. Eventually, Jerome produced his Latin Bible, the New Testament translated afresh from the original Greek, and the Old Testament, with the exception of certain books (whose previous translation he choose not to alter), translated afresh from the Hebrew and the Greek. This edition, known as the Vulgate was completed in 405 and would come to be the accepted Bible of Western Christendom for over a thousand years, and is still valued by Biblical scholars today for its expertise, and is consulted in the production of modern editions of the Bible.

By no means can Jerome’s profound scholarship be limited to the Vulgate, for Jerome wrote many New Testament commentaries, taught many students, and was at all times engaged in the questions of his day, writing his expert answers to inquiries from all sorts of fellow Christians, including the likes of the great St. Augustine himself. But, most importantly, Jerome was constantly at battle with the heretics of the day, exposing their errors by appeal to the Holy Scriptures and the faith of the Church.

Jerome constantly upheld the divine nature of the Scriptures, affirming that, ultimately, God is the author of the Bible. It was his reverence for the Word, and for the Lord, that lead Jerome in all his pursuits. Neither did Jerome doubt that the human authors were chosen for a reason, and he regularly set about investigating their language and historical setting to better understand the agency and message of God. Jerome considered the Bible free from all error or deception; thus he wrote, “The Lord's words are true; for Him to say it, means that it is.”[2]

Pope Benedict XV, in his encyclical Spiritus Paraclitus, held Jerome to be an example of true Biblical scholarship, and affirmed Catholic doctrine concerning the inspiration of all Scripture, and thus necessarily its inerrancy.

Saint Jerome is a common subject in religious art, and is usually depicted in one of two ways: either in a cave, wearing a loincloth and holding a stone and a skull, or in red robes and holding a model of a church. In either representation, he often has a lion at his feet.[3]