The lion is a large feline. Today restricted to Africa south of the Sahara and a small population in the Kathiawar peninsula of India, historically lions were also found throughout the Middle East, North Africa and in Southern Europe; hunting down the Nemean Lion was amongst the twelve labours of Hercules.

Lions are unusual amongst felines for their social habits, typically living in small family groups called prides, and their sexual dimorphism, the male lion being readily distinguished from the lioness by his larger size and distinctive mane, although certain varieties of maneless lions have been known to exist.

Hunting in lion prides is typically done by the lionesses, often with some waiting in ambush while others drive prey in their direction. The male lions are generally the first to eat, though. Lions are capable of hunting a wide range of potential prey, from animals as large as a water buffalo or yak, to creatures as small as a rabbit or a lemur. They are known to feast on carrion as well as fresh meat.

Culturally, lions are usually associated with nobility and kingship, thanks to their laconic, regal air and fearsome predatory abilities. The lion is often colloquially known as 'king of the jungle', although lions do not in fact inhabit jungles or rainforests, and are typically found on plains and savannas.

Although isolated attacks by lions on humans are not uncommon, the development of habitual anthropophagy is rare in lions. However, in East Africa in 1898 a pride of man-eating lions devoured nearly 140 railway workers constructing a bridge on the Uganda Railway, severely disrupting work, before they were finally shot by J. H. Patterson.[1]

Lions in the Bible

Lions appear over 150 times in the Bible.

Then went Samson down, and his father and his mother, to Timnath, and came to the vineyards of Timnath: and, behold, a young lion roared against him. And the Spirit of the LORD came mightily upon him, and he rent him as he would have rent a kid, and he had nothing in his hand: but he told not his father or his mother what he had done. And he went down, and talked with the woman; and she pleased Samson well.
And after a time he returned to take her, and he turned aside to see the carcase of the lion: and, behold, there was a swarm of bees and honey in the carcase of the lion. And he took thereof in his hands, and went on eating, and came to his father and mother, and he gave them, and they did eat: but he told not them that he had taken the honey out of the carcase of the lion.
So his father went down unto the woman: and Samson made there a feast; for so used the young men to do. And it came to pass, when they saw him, that they brought thirty companions to be with him. And Samson said unto them, I will now put forth a riddle unto you: if ye can certainly declare it me within the seven days of the feast, and find it out, then I will give you thirty sheets and thirty change of garments: But if ye cannot declare it me, then shall ye give me thirty sheets and thirty change of garments. And they said unto him, Put forth thy riddle, that we may hear it.
And he said unto them, Out of the eater came forth meat, and out of the strong came forth sweetness. And they could not in three days expound the riddle. And it came to pass on the seventh day, that they said unto Samson's wife, Entice thy husband, that he may declare unto us the riddle, lest we burn thee and thy father's house with fire: have ye called us to take that we have? is it not so?
And Samson's wife wept before him, and said, Thou dost but hate me, and lovest me not: thou hast put forth a riddle unto the children of my people, and hast not told it me. And he said unto her, Behold, I have not told it my father nor my mother, and shall I tell it thee?
And she wept before him the seven days, while their feast lasted: and it came to pass on the seventh day, that he told her, because she lay sore upon him: and she told the riddle to the children of her people.
And the men of the city said unto him on the seventh day before the sun went down, What is sweeter than honey? and what is stronger than a lion? And he said unto them, If ye had not plowed with my heifer, ye had not found out my riddle. And the Spirit of the LORD came upon him, and he went down to Ashkelon, and slew thirty men of them, and took their spoil, and gave change of garments unto them which expounded the riddle. And his anger was kindled, and he went up to his father's house.[2] 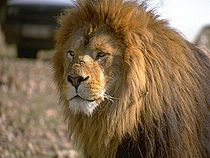 The Prophet Isaiah gave a prophecy about the Coming of the Lord:

But with righteousness shall he judge the poor, and reprove with equity for the meek of the earth: and he shall smite the earth with the rod of his mouth, and with the breath of his lips shall he slay the wicked. And righteousness shall be the girdle of his loins, and faithfulness the girdle of his reins. The wolf also shall dwell with the lamb, and the leopard shall lie down with the kid; and the calf and the young lion and the fatling together; and a little child shall lead them. And the cow and the bear shall feed; their young ones shall lie down together: and the lion shall eat straw like the ox. And the sucking child shall play on the hole of the asp, and the weaned child shall put his hand on the cockatrice' den.[5]

Daniel spent a night in the lions' den, but the Lord prevented the beasts from eating him.[6]

The lion which is mighty among beasts and does not retreat before any. Proverbs 30:30

Lions in The Origin of Species

Lions appear three times in The Origin of Species.

It has already been casually remarked that certain organs in the individual, which when mature become widely different and serve for different purposes, are in the embryo exactly alike. The embryos, also, of distinct animals within the same class are often strikingly similar: a better proof of this cannot be given, than a circumstance mentioned by Agassiz, namely, that having forgotten to ticket the embryo of some vertebrate animal, he cannot now tell whether it be that of a mammal, bird, or reptile. The vermiform larvae of moths, flies, beetles, &c., resemble each other much more closely than do the mature insects; but in the case of larvae, the embryos are active, and have been adapted for special lines of life. A trace of the law of embryonic resemblance, sometimes lasts till a rather late age: thus birds of the same genus, and of closely allied genera, often resemble each other in their first and second plumage; as we see in the spotted feathers in the thrush group. In the cat tribe, most of the species are striped or spotted in lines; and stripes can be plainly distinguished in the whelp of the lion. We occasionally though rarely see something of this kind in plants: thus the embryonic leaves of the ulex or furze, and the first leaves of the phyllodineous acaceas, are pinnate or divided like the ordinary leaves of the leguminosae.

The points of structure, in which the embryos of widely different animals of the same class resemble each other, often have no direct relation to their conditions of existence. We cannot, for instance, suppose that in the embryos of the vertebrata the peculiar loop-like course of the arteries near the branchial slits are related to similar conditions, in the young mammal which is nourished in the womb of its mother, in the egg of the bird which is hatched in a nest, and in the spawn of a frog under water. We have no more reason to believe in such a relation, than we have to believe that the same bones in the hand of a man, wing of a bat, and fin of a porpoise, are related to similar conditions of life. No one will suppose that the stripes on the whelp of a lion, or the spots on the young blackbird, are of any use to these animals, or are related to the conditions to which they are exposed.

The Disney film The Lion King and its 2019 remake stars several lions as the main characters: protagonist prince Simba, his parents Mufasa and Sarabi, his mate Nala, and his evil uncle Scar. The Lion King 2: Simba's Pride features more lion characters: Simba and Nala's daughter Kiara, Kiara's eventual mate Kovu, Kovu's mother Zira, and Kovu's brother and sister Nuka and Vitani. One of the TV series of the movie, The Lion Guard, includes Simba's son Kion, who is in charge of leading the titular Lion Guard in protecting the Pride Lands; the series later depicted Asiatic lions as guardians for the Tree of Life.

Jungle Emperor Leo is a 1950s manga and later 1960s anime (titled Kimba the White Lion in America) about a white lion cub named Leo/Kimba, who becomes king after his father - Panja/Caesar the king, also called the "white demon of the jungle" - is killed. Several more lions include Leo/Kimba's father Panja/Caesar, his girlfriend Lyra/Kitty and her uncle Specklerex, and his rival Bubu/Claw.

The Chronicles Of Narnia fantasy book series includes Aslan, a majestic lion who is an allegory for Jesus Christ.

Bravelands, the fourth book series made by Erin Hunter, has a lion cub named Fearless whose father Gallant is killed by the rogue lion Titan and is adopted by a troop of baboons. Other lions include his mother Swift, his half-sister Valor, Titan's favorite lioness Artful, and Titan and Artful's son Ruthless. A lone lion named Loyal is later confirmed to be Fearless's true father, with Gallant acting as the young lion's stepfather.