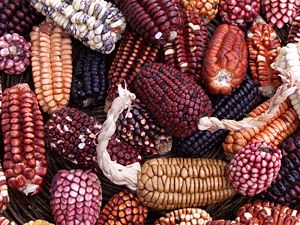 Corn (Zea mays), also called maize, was first grown by Native Americans. It is used as a food, and for many other uses.

Because of its tightly-packed kernels, corn is incapable of reproducing without human aid. This is a result of microevolution, directed by human agriculturalists.

It can be grown for both a cash crop and nourishment for people and livestock.

In the United States, in the 2000-2007 period there was a boom in the use of corn to produce ethanol as automotive fuel. The result has been a rise in the price of corn, affecting its use for food for humans and livestock.[1] By 2009 the ethanol bubble had burst. It is not economical and the environmental advantage is small, because adding together the natural gas in the fertilizer, the fossil fuels it takes to make the pesticides, power the tractor and other machinery needed to dry, harvest and transport corn, every bushel of field corn needs about a quarter to a third of a gallon to grow it, around fifty gallons per acre. It therefore takes more than a calorie of fossil fuel energy to produce a calorie of food. It is not clear how sustainable the growing of corn for biofuel would be.[2]

Corn is a good subject for genetic studies. The offspring of a pair of gametes consists of the individual kernels on a single cob. These kernels may display easily observed phenotypic variation such as color. In an ear of corn with two colors of kernel, the number of kernels of each color will often display the classic 3:1 Mendelian ratio.

Field corn varieties are grown primarily for livestock feed. Varieties grown for human consumption contain a gene that increases the sugar content and are known as sweet corn.

In 1983, Barbara McClintock won the Nobel Prize for Physiology or Medicine for studies of the genetics of corn, specifically her 1948 discovery of mobile genetic elements in the corn genome.

In recent years, Monsanto produced and began selling corn seed which has undergone artificial genetic modification. This corn is advertized to grow better, resist disease, and resist Glyphosate, the active ingredient in Monsanto's Round-Up and other herbicides. Genetically modified corn is estimated to account for at least 90% of the American corn market today.

The word maize always means the specific plant Zea mays. In the United States it much more commonly called "corn," as in corn-on-the-cob. In British usage, "corn" can mean any grain or kernel crop, specifically the staple crop of a particular region. It is important to understand this when reading English novels or studying English history (e.g. the Corn laws). In formal, academic, or scientific work that is written for an international audience it is common to use the word maize to avoid misunderstanding.

Maize is also the name for a color, an orange-yellow. According to a custom formalized in 1895, in university graduation ceremonies, graduates of a school of agriculture usually wear maize-colored tassels on their caps.[3]