Ethanol, also known as grain alcohol and ethyl alcohol, is a flammable chemical compound with a strong odor, and is the primary alcohol found in alcoholic beverages. In common usage, it is often referred to simply as alcohol. The chemical formula is variously represented as EtOH, CH3CH2OH, C2H5OH.

Ethanol is also a biofuel made from alcohol and is an oxygenate that is added to gasoline to increase the octane rating. The product is produced through the fermentation of corn, or other cellulosic material.

However, it is not economically viable as a fuel: "corn requires 29% more fossil energy than the fuel produced". [1]

Ethanol for use in alcoholic beverages, and the vast majority of ethanol for use as fuel, is produced by fermentation: when certain species of yeast (most importantly, Saccharomyces cerevisiae) metabolize sugar in the absence of oxygen, they produce ethanol and carbon dioxide. The overall chemical reaction conducted by the yeast may be represented by the chemical equation

The process of culturing yeast under conditions to produce alcohol is referred to as brewing. Brewing can only produce relatively dilute concentrations of ethanol in water; concentrated ethanol solutions are toxic to yeast. The most ethanol-tolerant strains of yeast can survive in up to about 15% ethanol by volume.

During the fermentation process, it is important to prevent oxygen from getting to the ethanol, since otherwise the ethanol would be oxidised to acetic acid (vinegar). Also, in the presence of oxygen, the yeast would undergo aerobic respiration to produce just carbon dioxide and water, without producing ethanol.

In order to produce ethanol from starchy materials such as cereal grains, the starch must first be broken down into sugars. In brewing beer, this has traditionally been accomplished allowing the grain to germinate, or malt. In the process of germination, the seed produces enzymes that can break its starches into sugars.

Ethanol is also produced by the catalytic hydration of ethylene. Crude oil is catalytically 'cracked' to ethylene and the ethylene is chemically combined with water at high temperatures with an acid catalyst. This process is actually cheaper than fermentation, but has become less common as ethanol produced from corn is heavily subsidized by the federal government. 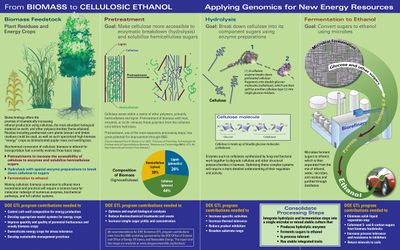 From biomass to ethanol.

In the United States ethanol is most commonly made through the fermentation of corn. Other countries, such as Brazil, use sugarcane as a feedstock for the production of ethanol. Currently, the US has the highest production numbers for ethanol in the world, but some analysts forecast China as being a potential world player in the ethanol market. China currently uses casava and wheat among other material for producing ethanol.

Some in the Food vs. Fuel debate consider the use of a high-energy food crop, such as corn, detrimental to our food supply. In particular, Lester Brown of the Earth Policy Institute is known for advocating this position.

The latest automotive grade of ethanol in Canada has 1% water. This is specified by the CSB, the Canadian Standards Board. Water is terrible for any fuel injection system and will probably lead to corrosion of the fuel injectors and fuel pumps.

The auto fuel ethanol government standards in Brazil, do not allow any water.

One major gasoline wholesaler and retailer in Canada has used 8% ethanol in all its grades of gasoline for over 10 years because it was one of the cheapest ways to boost the octane rating of gasoline. The R+M rating of ethanol is 104.

Ethanol has about 36% oxygen by weight whereas normal gasoline has no oxygen. This is why a car runs much smoother at very low temperatures during the first 2 or 3 minutes as the oxygen content in ethanol enhanced gasoline allows a hotter, cleaner burn.