Atheology is a resistance or aversion to theology.[2] [3]

Atheological arguments are arguments against the existence of God (see also: Rebuttals to atheist arguments and Responding to atheists and Analysis of atheism and common objections to atheism).

The French atheist Georges Bataille coined the term and concept atheology to express his notions on the “science of the death or destruction of God.”[4] See also: Atheism and science

One of the fundamental reasons for the conflict between the atheist worldview and the theistic worldview is their frequently incompatible views concerning naturalism and supernaturalism (see: Atheism and the supernatural).

The Christian philosopher and Christian apologist Alvin Plantinga wrote concerning atheology:"[S]ome theologians and theistic philosophers have tried to give successful arguments or proofs for the existence of God. This enterprise is called natural theology… Other philosophers, of course, have presented arguments for the falsehood of theistic beliefs; these philosophers conclude that belief in God is demonstrably irrational or unreasonable. We might call this enterprise natural atheology."[5]

Daniel Lowe, a student at Fuller Theological Seminary, wrote about theology and atheology:

In 1990, the atheist philosopher Michael Martin indicated there was a general absence of an atheistic response to contemporary work in the philosophy of religion and in jest he indicated that it was his "cross to bear" to respond to theistic arguments (See: Atheist apologetics).[9] Yet, in 1994, Michael Martin was criticized for his eleventh hour cancellation of his debate with Greg Bahnsen (see: Greg Bahnsen and debate and Bahnson-Martin debate press release).

In the beginning of the 21st century a militant form of atheology called New Atheism developed in the Western World but that movement quickly began to decline within seven years and then quickly died out (see: Decline of militant atheism in the West and Decline of the atheist movement).

The theology professor Malcolm Yarnell III indicated concerning New Atheism that such antipathy toward God is "as old as man’s rebellion against God... Atheism is not new and neither is its result: divine judgment on such foolishness. The new atheists will discover that the God they say does not exist will remain the same living God long after their vain attempts to build a godless civilization have collapsed into ruins.”[10]

Eric Kaufmann, an agnostic and professor at Birkbeck College, University of London, whose academic research specialty is how demographic changes affect religion/irreligion and politics, wrote in 2010: 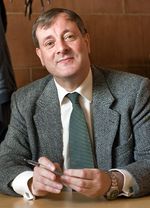 In 2001, the atheist and philosopher Quentin Smith declared: "Naturalists [atheists] passively watched as realist versions of theism … began to sweep through the philosophical community, until today perhaps one-quarter or one-third of philosophy professors are theists, with most being orthodox Christians…. God is not 'dead' in academia; he returned to life in the 1960's and is now alive and well in his last academic stronghold, philosophy departments."[14]}}

The majority of philosophers of religion, or those who have extensively studied the issue of the existence of God, are theists (72 percent).[15]

In 2004, Professor Alister McGrath, professor of historical theology at Wycliffe Hall, Oxford University, who is an ex-atheist, declared, "The golden age of atheism is over."[16]

Although atheists commonly claim there are reasonable arguments for atheism, the quality of atheist debate has been quite poor from the proponents of atheism (see: Atheism debates). In recent times, there have been a number of notable cases of atheists being unwilling to debate (see: Atheism and cowardice).[17][18][19]

Social science research indicates that antitheists score the highest among atheists when it comes to personality traits such as narcissism, dogmatism, and anger.[23][24] Furthermore, they scored lowest when it comes to agreeableness and positive relations with others.[23]

See also: Schools of atheist thought and Atheist factions and Decline of the atheist movement

The essay A theory of atheology. Reason, critique, and beyond indicates "atheology is pluralistic in essence. There is no “one true” atheism, which is to be represented in a secular “Good Book,” despite Grayling’s attempt."[25]

An ex-atheist wrote: "As an Atheist for 40 years, I noticed that there is not just a wide variety of Atheist positions, but there exists an actual battle between certain Atheist factions."[26] See: Schools of atheist thought and Atheist factions

Sergei Golovin on atheology and the former Soviet Union

According to the University of Cambridge, historically, the "most notable spread of atheism was achieved through the success of the 1917 Russian Revolution, which brought the Marxist-Leninists to power."[28]

The article After Communism's Collapse: Creation in the Crimea declares concerning atheology and the former Soviet Union:

An excerpt of his review is given below:

Etymology of the word atheology: a- +‎ theology