A beggar in Bangkok, Thailand where the nontheistic form of Buddhism called the Theravada school of Buddhism is prevalent.

In 2010, the Pew Research Forum indicated that 93.2% of the people of Thailand were Buddhists.[1]

Narcissism is excessive love of oneself.

The Christian organization Got Questions Ministry declares about atheism and narcissism:

Jesus Christ and his apostles taught a gospel of love which included sacrificial love.[3] Jesus said, "Greater love hath no man than this, that a man lay down his life for his friends." (John 15:13).

In his essay The Triumph of the Gospel of Love, Monk Themistocles Adamopoulo wrote:

According to a study conducted by researchers at the University of Tennessee: "If any subset of our non-belief sample fit the “angry, argumentative, dogmatic” stereotype, it is the Anti-Theists. This group scored the highest amongst our other typologies on empirical psychometric measures of anger, autonomy, agreeableness, narcissism, and dogmatism while scoring lowest on measures of positive relations with others."[6] 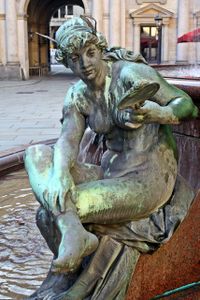 A study found that atheists were more likely to be seen as narcissistic than religious believers - especially male atheists.[7] See also: Atheism and arrogance

"Research into prejudice toward atheists has generally focused on broad characteristics. Some of these characteristics (i.e., self-centeredness, elitism, individualism, and immorality) indicate a possible prejudice of narcissism. To investigate this specific prejudice, the present study used the Narcissistic Personality Inventory (Raskin & Terry, 1988), the Hypersensitive Narcissism Scale (Hendin & Cheek, 1997), and the Interpersonal Reactivity Index (Davis, 1983), which were adjusted so that the items of each measure were changed from first-person statements to third-person statements to measure participants’ perceptions. Participants (N = 359) were given a description of a fictitious individual named Alex, portrayed to them as either male or female and atheist or religious, or male or female with no additional information (creating 6 experimental groups), and then asked to complete the measures as they thought the individual would. Participants consistently rated atheists higher on narcissism measures and lower on empathy measures, indicating a perception of greater narcissism and a lack of empathy compared with religious individuals and controls. Participants’ perceptions of Alex were affected by his or her gender in conjunction with his or her religion, and the 2 variables of gender and religion interacted to create different patterns of perception. In general, interactions indicated differences in the way religion and gender impacted the perception of individuals as narcissistic, affecting perceptions of males more than females. The results are consistent with research findings that perceptions of atheists tend to be negative and prejudicial. This study highlights the need to compare perceptions with actual personality differences between atheists and religious individuals."[8]

An article at Atheist Nexus says about the divisiveness within modern atheism caused by the New Atheism and Atheism plus movements:

On the other hand, the Apostle Paul told his fellow Christians to be a follower of Christ and not himself (1 Corinthians 3:4). An angel told the Apostle John to not fall down before him (Revelation 19:10).

LaVeyan Satanism is a form of atheism which extolls the values of Satan which are described in the Bible. It is a very prideful and hedonistic worldview. Some specific characteristics of Leveyan Satanism is that it incorporates egoism, self-deification, the occult/magic, Social Darwinism and naturalism. It was found by Anton LeVey in 1966. The Church of Satan was also founded by LeVey.

Friedrich Nietzsche wrote: "But now God is dead. You superior men, this God was your greatest danger. Only since he is in the grave, have you risen again. Only now comes the great noontide; only now the superior man will be – Lord!"

Arrogance and a lack of regard for the feelings of others are typical characteristics of narcissism.[12] One of the common and well-founded charges against atheists is their arrogance and presumptuousness (see: Atheism and arrogance).[13]

According to Dr. Ananya Mandal, "Envy: Due to their sense of being superior to others, narcissists may feel insecure when faced with another person’s ability, which they may try to belittle by demonstrating contempt or dismissal of it."[14]

Politically, atheists tend to lean towards the left (see: Atheism and politics). And the left has a reputation of being envious and angry.[15]

Atheists have earned a reputation for intolerant and for being thin-skinned (see: Atheism and intolerance and militant atheism and Atheist whining).

A common and legitimate criticism of the atheist worldview is that atheism is irrational.[19]

A common and legitimate criticism of the atheist worldview is that atheism is irrational.[21] In short, atheism is a fundamentally incoherent worldview with a number of inconsistencies.[22] See also: Atheism and irrationality

Late in Charles Darwin's life, Darwin told the Duke of Argyll that he frequently had overwhelming thoughts that the natural world was the result of design.[23]

Since World War II a majority of the most prominent and vocal defenders of the evolutionary position which employs methodological naturalism have been atheists and agnostics (see also: Causes of evolutionary belief)[24]

Sam Vankin in his book A to Z of Narcissism and Narcissistic Personality Disorder Encyclopedia: The Narcissism Bible writes: