Global resurgence of religion and desecularization

From a global perspective, religion is seeing a resurgence and scholars of religious demographics frequently use the term "global resurgence of religion" to describe the process of desecularization which began in the late portion of the 20th century.[5]

As a percentage of the world's population, atheism peaked in 1970.[6] 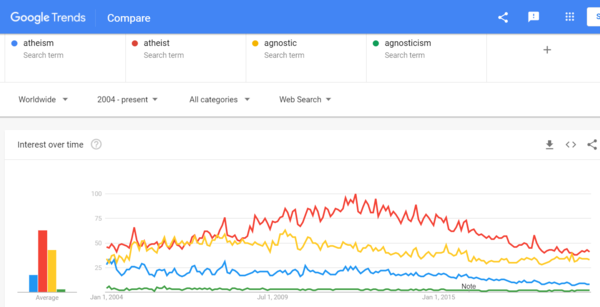 According to Google Trends, worldwide the searches at Google for the terms atheist, atheism, agnostic and agnosticism were lower in January 2020 than in January 2004. According to Google Trends, worldwide the searches at Google for the terms God and Jesus were higher in January 2020 than in January 2004.