Arguments for theism and against atheism 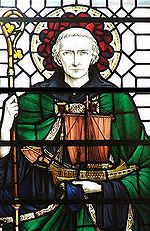 Anselm of Canterbury's version of the ontological argument appeared in his work Proslogium.

The majority of philosophers of religion, or those who have extensively studied the issue of the existence of God, are theists (72 percent).[1]

In relation to the debate between theism and atheism, theists often criticize atheism as being contrary to persuasive argument and have a number of arguments against atheism.

Arguments for the existence of God include: