A Soviet propaganda poster disseminated in the Bezbozhnik (Atheist) magazine depicting Jesus being dumped from a wheelbarrow by an industrial worker as well as a smashed church bell; the text advocates Industrialisation Day as an alternative replacement to the Christian Transfiguration Day.

Atheist art is art which uses themes and/or imagery from atheism or atheistic concepts.

Despite atheism existing for thousands of years and predating Christianity, there is a small proportion of art compared to religious art. For example, Wikipedia, which was founded by an atheist and agnostic, has no article on "Atheist art", but Wikipedia does have an article on Christian art.

The argument from beauty argues the existence of beauty in the natural world testifies to the existence of God who both designed natural beauty and who possesses a divine beauty. Objective beauty exists and beauty is not merely subjective in nature.[1]

Most atheists and atheist groups do not use the limited amount of atheist art which is available. The atheist Austin Cline wrote: "Aesthetics almost never comes up in atheists' discussions about religion...there is little to no 'atheist art.'"[2]

The atheist and feminist Skepchick writer Any Roth wrote about the atheist population having apathy about atheist art: "Does art matter to atheism? This is actually an interesting question that I don’t think movement atheist thinks much about."[3]

An atheist posted to atheist Sam Harris' discussion board: "This idea started when I googled “atheist art”. You see I was expecting to find art. Instead, what you get is a whole bunch of knockoffs of famous religious art that has been disfigured and mutilated. This made me slightly ashamed."[4]

Low amount of quality atheist art: Atheism is an uninspiring and negative concept

Atheist Francois Tremblay wrote: "One last problem that undermines any propagation of atheism is inspiration. Let's be honest here, "there is no god!" is not a very motivating call for most people."[5]

The ex-atheist Alister McGrath has repeatedly pointed out the uninspiring nature of atheism.[6][7] According to McGrath, atheism is "stale", "dull" and difficult to believe.[8]

Atheism is a negative concept

Atheism, as defined by the Stanford Encyclopedia of Philosophy, the Routledge Encyclopedia of Philosophy, and other philosophy reference works, is the denial of the existence of God.[11] Beginning in the latter portion of the 20th century and continuing beyond, many agnostics/atheists have argued that the definition of atheism should be defined as a mere lack of belief in God or gods. [12][13] [14]

Thus, atheism is a negative concept which involves denial/lack (see also: Atheists and the fallacy of exclusion and Atheism and historical revisionism).

Atheism is a depressing worldview

Atheists have a higher suicide rate than theists.[15] Please see: Atheism and suicide

Michael C. Sullivan wrote in his book In Search of a Perfect World: A Historical Perspective on the Phenomenon of Millennialism and Dissatifaction with The World As It Is:

In 2014, the Skepticon 7 conference indicated that is was looking for artists. However, given the bland/boring nature of atheism, no requests for artists to depict atheism were requested. Instead, the request for artists was for the Skepticon Planetary Science Art Show and the request indicated: "The art HAS to have something to do with the science of planets or the cosmos."[17] See also: Atheism and wonder

Hostility of the secular left to the argument from beauty

See also: Argument from beauty and Atheism and purpose

The argument from beauty argues the existence of beauty in the natural world testifies to the existence of God who both designed natural beauty and who possesses a divine beauty. Objective beauty exists and beauty is not merely subjective in nature.[18]

Author John C. Wright wrote in his 2014 essay How We’ve Been Robbed of Beauty by the Left:

Why beauty matters and atheistic ideology degrading the importance of beauty

Secular leftism vs. traditionalist/religious/nationalism in the the arts - Hungary

A Rice University study found that 17 percent - about one out of five scientists who describe themselves as either atheists or agnostics - actually go to church, although not too often.[20]

Militant atheism and the destruction of beautiful church buildings

According to the University of Cambridge, historically, the "most notable spread of atheism was achieved through the success of the 1917 Russian Revolution, which brought the Marxist-Leninists to power."[22] See: Atheism and communism

The atheism in communist regimes has been and continues to be militant atheism and various acts of repression including the razing of thousands of religious buildings and the killing, imprisoning, and oppression of religious leaders and believers.[23]

Destruction of thousands of churches in the Soviet Union

Author Dimitry V. Pospielovsky wrote: "The People's Commissariat for Education boasted of having convinced the department dealing with historical monuments to reduce the list of architecturally precious churches under its protection from 7,000 to 1,000 automatically condemning 6000 church buildings to future destruction.[24]

Although some Soviet churches were converted to atheist museums or used for other purposes, they generally did not replace them with beautiful buildings related to atheism. 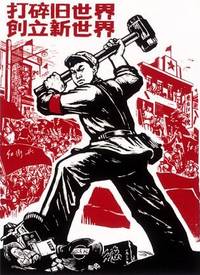 Propagation of religions/worldviews via art, music and culture Art, music and culture is often employed as means of evangelism and/or serve as an means of introduction to a religion/worldview.

The journalist and ex-atheist Peter Hitchens, who is the brother of the late atheist Christopher Hitchens, said upon seeing an art exhibit of Michelangelo's painting The Last Judgment he came to the realization that he might be judged which startled him.[27] This started a train of thought within Peter Hichens that eventually led him to become a Christian.[28]

Most atheists are apathetic about the spread of atheism in terms of their own individual efforts (see: Atheism and apathy). At the present time, global atheism is shrinking in terms of its world percentage of adherents (See also: Desecularization).