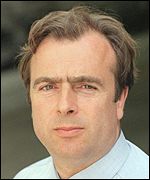 Peter Jonathan Hitchens (28 October 1951, Malta) is a British journalist, author and broadcaster. He currently writes for the British weekly newspaper, The Mail on Sunday. He is the younger brother of journalist Christopher Hitchens. Hitchens was a former Trotskyist and member of the International Socialists from 1969 to 1975, later joining the British Labour Party from 1979 to 1983. He left the party when he became a political reporter at the Daily Express, thinking it wrong to carry a party card when directly reporting politics.[1] He also studied politics at York University between 1970 and 1973.

However, in his early 30's he returned to the conservatism and Anglicanism of his upbringing[2] and in 1997 he joined the Conservative Party, believing it to be the democratic resistance to Tony Blair's New Labour. Dissatisfied with the lack of direction of the Conservative Party, he left it in 2003 and now asserts that the only way forward is to completely dismantle and rebuild the party. Politically, Hitchens supports social, moral and cultural conservatism, and classic liberalism, not dissimilar to those of American paleoconservatives. Hitchens describes himself as a Burkean conservative.[3]

He has been a journalist for over 25 years, much of that time writing for the Daily Express, which he left after it was taken over by Richard Desmond, who had generated his wealth as a publisher of pornographic magazines. Hitchens was morally opposed to this, and moved to the Daily Mail's sister publication, The Mail On Sunday. He has also worked as a political reporter, a diplomatic and defence specialist, and as a foreign correspondent in both Moscow and Washington, D.C.

He is a frequent critic of political correctness. He is the younger brother of the late antitheist writer Christopher Hitchens.

He has been described by the left-wing Guardian newspaper as: "The Mail on Sunday's fulminator-in-chief" and his columns as "molten Old Testament fury shot through with visceral wit."[1] Hitchens is uncompromising with his moral and political stance, describing Britain as a land of "burglaries, muggings, swearing, pools of vomit, MRSA, rave parties and traveller encampments"; council estates as "surrounded by the tattooed, with their pit bulls and serial partners, crack dens, joy-riders, open-all-hours pubs," and the police as "wooden, officious twerps in dayglo jackets" who have sided with the lawless and given up on crime. Of single mothers, he wrote: "It cannot be long before Britain has its first 24-year-old granny. When you abolish husbands and fathers that is what you get. As the rules of civilised life are swept away and the only people interested in getting married are lesbian clergywomen, there will soon be thousands of them." Hitchens lays the blame at the door of the liberal left-wing: "Like several governments before it, Labour has actively encouraged promiscuity by undermining marriage, promoting 'alternative lifestyles' and preaching immorality in schools - and, of course, by continuing to subsidise the results." He has also criticised immigration, which is "limitless" and "unmonitored"; Tony Blair's New Labour - "a horrible rabble of fakes, wreckers and frauds" who are "dismantling Britain as a free country"; the Conservative Party - "the Useless party"; the EU - "horrible", "a monster", "anti-British"; and liberal left-wing intellectuals - "hell-bent on turning the UK into a meaningless, history-free and cultureless wilderness".[1] However, Hitchens has also criticized Conservative politicians, describing free trade and privatization as "the con that ruined Britain." On Ronald Reagan and Margaret Thatcher, he was critical, and wrote "I am so sorry now that I fell for the great Thatcher-Reagan promise. I can’t deny that I did. I believed all that stuff about privatisation and free trade and the unrestrained market. I think I may even have been taken in by the prophecies of a great share-owning democracy." [4]

His outspoken criticism has predictably made him unpopular with many politicians as well as the left-wing press: Gerry Adams, leader of the IRA's political wing (Sinn Féin) called for him to be "decommissioned"; Tony Blair, while Prime Minister, told him to "sit down and stop being bad" for daring to ask him a difficult question; and Conservative Party leader David Cameron refused to allow him an interview, a rebuff Hitchens took as a compliment. Hitchens' book "The Abolition of Britain" has been described as "the most sustained, internally logical and powerful attack on Tony Blair and all his works".[5]

He has made a detailed study of the UK's crime problem and the negative changes in policing and the police force, leading to his book "The Abolition of Liberty". He is strongly critical of the use of drugs to control the behaviour of children, and has vigorously questioned the existence of the disorder ADHD. He has argued that parents who want single vaccinations for their children rather than the controversial triple MMR should be given them on the NHS, and has challenged Tony Blair and Prime Minister Gordon Brown to say openly if their own young sons have been given the MMR they are forcing on others.[6] He has opposed the introduction of identity cards and attacked what he believes is the Labour government's assault on ancient English liberties.[7]

He describes intelligent design as being valuable as a sceptical current critical of Darwinist orthodoxy and intolerance, although not as a free-standing theory, but says: "I am not a scientist... My own view on the controversy...can be summarised in the words 'I have no idea who is right, and nor have they'."[8]