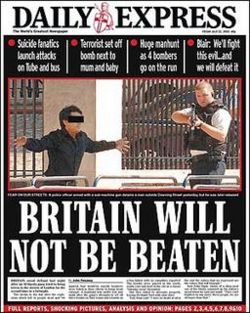 The Daily Express is a British tabloid newspaper published by Express Newspapers. It has a daily circulation of over 760,000. Founded in 1900, it switched from broadsheet to tabloid format in 1977. Until its shift to the globalist Left under new ownership in 2018, it was a frequent target of criticism by liberals and The Guardian, who accused it of being "xenophobic" and "homophobic." It opposed the European Union. Despite professing family values, the newspaper is part of the Northern and Shell Group, which publishes pornographic magazines and owns the pornographic Television X television channels.[1]

During the 2012 United States presidential election campaign, it was critical of Barack Obama and favorable to Mitt Romney.[2]

The Daily Express once was a strong supporter of Brexit (Britain's exit from the European Union).[3]

Described as "one of Britain’s last right-wing newspapers," the Daily Express was purchased in 2018 by the Trinity Mirror group, a left-wing media organization that promotes left-wing views such as the Daily Mirror.[4]

The newspaper quickly became liberal and increasingly opposed to Brexit.[5]