Postmodernism is an antichristian,[3] far-left, 20th century worldview and academic movement characterized by denial of objective truth, and which asserts that assertions of objective knowledge are essentially impossible.

The Christian apologist Norman Geisler wrote about postmodernism: "In short, the root of Post-modernism is atheism and the fruit of it is relativism — relativism in every area of life and thought."[4] Atheists played a significant role in terms of postmodernist leadership and its following (see: Postmodernism and atheists).

The architect of the first postmodern building said that he designed it with no design in mind.[5] Soviet Union and Museums of Atheism

The Soviet Union closed down many churches and converted some of them into Museums of Atheism rather than attempt to build magnificent buildings dedicated to promoting atheistic ideology.[8] 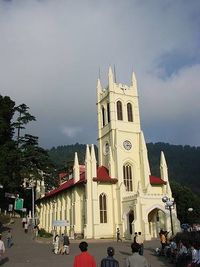 Christ Church in Shimla, India is the second oldest church in North India.

On April 23, 2016, Wikipedia, a wiki founded by an atheist and agnostic, declares in its church architecture article:

Secular leftists often put an excessive focus on diversity and often fail to focus on excellence.