Diagoras of Melos was an ancient Greek atheist, poet and sophist of the 5th century BC.

His position as a poet seems to be one of little prominence.[1] See: Atheism and culture

Despite atheism existing for thousands of years, there is no large body of quality atheist poetry. For example, Wikipedia, which was founded by an atheist and agnostic, has no article on atheist poetry, yet it does have articles on Christian poetry and biblical poetry.[2][3][4]

Diagoras of Melos was a 5th century B.C. Greek philosopher, poet, sophist and atheist. According to the book Greek Lyric Poetry: A Complete Collection of the Surviving Passages from the Greek Song-writers by George Stanley Farnell, "His position as a poet seems to be one of little prominence, and he probably abandoned his art for philosophical speculation."[8] There is little information about Diagoras of Melos' life and his beliefs. And no atheist poems have been found written by him as far as the historical record.

An atheistic school of thought can be found in ancient Indian thought and has existed from the time of the historical Vedic religion (2nd millennium B.C.).[9]

Using the above chronology of secular historians as far as the first appearances of atheists, the atheist population has had approximately six thousand years to compile a large body of quality atheistic poetry. Yet, atheists have not achieved this.

Propagation of religions/worldviews via poetry, art, music and culture 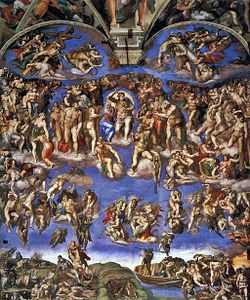 Art, music and culture is often employed as means of evangelism and/or serve as an means of introduction to a religion/worldview.

According to Wikipedia, which as noted above was founded by an atheist an agnostic, "The influence of Christianity on poetry has been great in any area that Christianity has taken hold."[10]

The journalist and ex-atheist Peter Hitchens, who is the brother of the late atheist Christopher Hitchens, said upon seeing an art exhibit of Michelangelo's painting The Last Judgment he came to the realization that he might be judged which startled him.[11] This started a train of thought within Peter Hichens that eventually led him to become a Christian.[12]

Inspiration is important as far as producing quality poetry, art and music. Atheist Francois Tremblay wrote: "One last problem that undermines any propagation of atheism is inspiration. Let's be honest here, "there is no god!" is not a very motivating call for most people." (See also: Atheism and inspiration).[13]

At the present time, global atheism is shrinking in terms of its world percentage of adherents (See also: Desecularization).