Without any further ado here is my debate challenge to atheist Penn Jillette:

I challenge Penn Jillette to a written debate. The debate will be between Penn Jillette and two atheists of his choosing and myself and two Christians of my choosing. I prefer written debates as I believe they offer the audience the maximum amount of information to render a decision. Oral debates are often subject to the participants' memories and also do not allow additional research to be done on particular points.

The subject of the debate will be: "Does God exist?". The content of the written debate will be offered to the public as public domain content.

I am considering asking the popular YouTube video maker Shockofgod to be one of the Christian debaters of my choosing. So below I offer a few suggestions to Penn Jillette - two of which relate to Shockofgod.

Texas is a very influential state in the United States when it comes to biology textbooks.[2] A supporter of Creation Ministries International with a large Christian YouTube audience (YouTube video producer Shockofgod) has declared he is going to aggressively promote the Question evolution! campaign in Texas.[3]

1. Please be ready to offer proof and evidence that atheism is true.[4]

2. Please be ready to answer the "15 questions that evolutionists cannot answer" which are featured in Creation Ministries International's Question evolution! campaign.

3. Consider reading Conservapedia's atheism article and the Conservepedia Christian apologetics article to better prepare you for the debate. You may find you want to change sides and debate on the Christian side of the aisle given the abundant evidence for Christianity and the lack of proof and evidence for atheism. In addition, please consider reading Creation Ministries International's atheism article which can be found here which is written by Mariano Grinbank as it offers quite a bit of information concerning atheism which you may be asked to address.

4. Please consider losing some weight. I certainly don't want you to claim you could have done better in the debate if your body and mental acumen had been operating at "full atheist power". I am giving you 150 days to shed your flabby physique and replace it with a "mean, lean, atheism debating machine". Given the "superior atheist intellect" which you no doubt possess, I am sure if you put your mind to it that you will be able to lose the weight. However, if you need more time, I can certainly accommodate you. I have put some helpful resources below which offers some of the best information from medical science, exercise science and nutritional science as I know that many atheists purport to love science. Plus, according to medical science, there are a number of health risks associated with being overweight which are cited in Conservapedia's Atheism and Mental and Physical Health article.

5. Although you might want Richard Dawkins to be a debate partner, please consider this information:

"The absence of a debate with the foremost apologist for Christian theism is a glaring omission on your CV and is of course apt to be interpreted as cowardice on your part."[5]

I would encourage you to ask Richard Dawkins to be a debate partner, but please do not be disappointed if he declines as he often is reluctant to leave his "intellectual bunny hole".

If Penn Jillete decides to dodge this debate offer, Conservapedia is giving Penn Jillette 150 days from 6/23/11 to publicly debate the toughest Bible believing Christian debate opponent he can find concerning the existence of God. By November 20, 2011, we will see if Penn Jillette believes he can defend atheism against biblical Christianity. And please Penn Jillette, try to be more logical than you were HERE.

Penn Jillette has been informed about this debate offer via his Twitter account though one of his Twitter followers. Will Penn Jillette come out of his "intellectual bunny hole" and debate the existence of God by November 20, 2011 with a Bible believer? Again, if Jillette declines to debate Conservapedia we certainly strongly encourage him to seek out the strongest Bible believer opponent who is willing to publicly debate him concerning the existence of God. We gave him until November 20, 2011 to do this. If he fails to do this, who knows what people will think!

On August 1, 2011 Penn Jillette released a contradictory video on his refusal to debate me, User: Conservative, concerning the existence of God. The debate offered was "Does God exist?". I will not link to the video as it contains profane language. A brief response to Jillette's video is given below.

First, Penn Jillette says he "can't really comment" on the debate offer and then proceeds to comment on the debate offer that he claims he did not read. Second, he then says as much as he would like to debate me, he claims he has an argument on why he will not me, but then quickly says it's a "stupid argument" (Jillette also says the dispute he has with Conservapedia "matters"). Penn Jillette says he won't debate me on the existence of God because he has friends who are Christians whom he loves/respects and he won't debate me because he doesn't believe I truly believe what I say about the existence of God (I might be an atheist he said), but on the other hand I might, but he needs to see more evidence of it (please see: Penn Jillette, here is the evidence you claim you need to debate me). Below, I provide the evidence Jillette requested, but given the weakness of atheism, I strongly suspect at this point Penn Jillette will soon come up with another excuse on why he won't debate me (or remain silent). However, I don't believe whatever excuses Jillette may offer are the real issue and the 2 section below should settle this matter.

Now that we have that cleared up, let the written debate of "Does God exist?" begin and I am giving you until November 20, 2011 to fully prepare mind and body for the debate so you are debating at "full atheist power". Given the weakness of atheism, I strongly suspect at this point you will soon come up with another excuse on why you won't debate me (or remain silent). However, I don't believe whatever excuses you may offer are the real issue.

The written debate will be between Penn Jillette and two atheists of his choosing and myself and two Christians of my choosing. I prefer written debates as I believe they offer the audience the maximum amount of information to render a decision. Oral debates are often subject to the participants' memories and also do not allow additional research to be done on particular points.

The Brights Movement was started in 2003 by Paul Geisert and Mynga Futrell in 2003 in order to assist in the advocacy of a naturalistic worldview.[8][9] The Brights movement had a media campaign and was announced in Wired magazine (by Richard Dawkins), Free Inquiry (by Richard Dawkins), and on the New York Times op-ed page (by the philosopher and atheist Daniel Dennett).

On September 26, 2011, the popular Christian YouTube video maker Shockofgod, who has over 18,000 subscribers, challenged atheist Penn Jillette to a debate.VIDEO. The debate challenge focuses on the 15 questions that evolutionists cannot satisfactorily answer.

Shockofgod points out that although Penn Jillette is an "enthusiastic bright", the website of the Brights Movement has plunging web traffic according to Compete.com[5]. Shockofgod quipped that it appears as if his prediction that atheism will go from "a squeak to half a squeak in American society" due to the Question evolution! campaign is being fullfilled faster than he expected. The video with the prediction is located HERE.

Shockofgod fan: "He's watching. trust me. Most Atheists are obsessed with the TRUTH,﻿ they just don't like it."[6]

Shockofgod fan: "Come on Penn, you even WANT people to debate because﻿ our opinions on the existence of God are too important to keep private!"[7] The Christian apologist Sye Ten Bruggencate has challenged Penn Jillette to a debate and Jillette has not accepted his debate challenge.

See also: Penn Jillette, don't just stand there! Do something! and Atheist Population and Atheism and Debate

In 2011, the American Spectator citing research published in the International Bulletin of Missionary Research reported that atheism is on the decline as a whole in terms of adherents.[13]

In 2008, the American Religious Indentification Survey (ARIS) reported 1.6% of Americans self-identified themselves as atheists. [15]

Jillette, we both know that 1.6% of Americans being atheists is a mere squeak in American society. Are you afraid that after a well known atheist loses yet another debate that it will become half a squeak? Why haven't you mustered the courage to publicly debate a prominent Bible believing debater yet? The toughest debater who will agree to debate you. Is there a lack of Christian scholars and Christian apologists? There must be a reason. What is it? Surely, if you had a good case for atheism, you would be eager to debate and would want your case be publicly cross examined. Is that the problem? You don't believe you have a good case for atheism?

The rise of global Christianity: Over 2,000 years of Christian increase

Question for Penn Jillette: Mr. Jilette recently claimed that the atheist population in the United States is over 20% by some polls.[16] Mr. Jillette, Conservapedia wishes to know what polls you are referring to. We hope you are not counting the non-religious as being atheists because just because someone doesn't attend church regularly or "religion is not an important part of daily life" that doesn't mean they are an atheist (If you read our Atheism and obesity article you would know that).

Mr. Jillette, please respond to our essay Penn Jillette, don't just stand there! Do something! which cites an authoritative 2008 survey which bolsters the view that atheism is but a squeak in American society. Specifically, in 2008, the American Religious Indentification Survey (ARIS) reported 1.6% of Americans self-identified themselves as atheists. [17]

Penn Jillette in his intellectual bunny hole which unfortunately is his native habitat. Penn Jillette, atheism is in global decline in terms of its adherents.[19] Show the world that you believe atheism is a intellectually respectable position by debating a Bible believer. Do you truly believe that atheism can do well under cross examination? 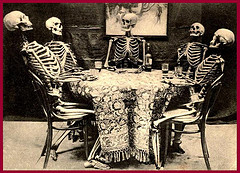