Richard Carrier (born 1969), M.A., M.Phil., Ph.D. History, is an advocate of metaphysical naturalism. He has written a book, Sense and Goodness without God (see also: Good without God). He is a prominent atheist in the atheist community in the US.

Carrier advocates the notion that Jesus likely never existed which is an extreme minority position among historians and contrary to the historical evidence pointing to Jesus being a historical figure (The Great Soviet Encyclopedia, a parcel of the propaganda of the atheistic, communist Soviet Union, is the only encyclopedia to ever advocate the Christ myth. See also: Historicity of Jesus).[2][3][4]

After Richard Carrier completed his PhD in ancient history at Columbia University in 2008, he decided against attempting to find an academic post and is now a blogger. According to Carrier, "The US economy had just collapsed, and humanities departments had put a freeze on hires,” he explains. “I had also soured on the life of a professor by then, having seen it from the inside.”[5]

Carrier is a veteran of the United States Coast Guard.[6]

See also: Richard Carrier, adultery, divorce and polyamory and Prominent atheists and adultery and Atheism, polyamory and other immoral relationships

The atheist Richard Carrier divorced his wife and now practices polyamory.[7] Before divorcing his wife, he was involved in adulterous affairs.[8]

Richard Carrier reported in 2016 that Amanda Metskas, the national Executive Director of Camp Quest, are dating and "she and her husband, August Brunsman, are publicly polyamorous."[10][11]

In 2018, the atheist Hemant Mehta wrote about the defamation lawsuits related to sexual harassment allegations against Richard Carrier:

Mehta also wrote: "In all three lawsuits, Carrier is asking the Court for damages worth $1.3 million — that’s nearly $4 million in total — in addition to legal costs, interest, and anything else the Courts deem fit. He’s also filing all three lawsuits on his own — without the help of a lawyer (at least one who’s listed in the complaints)."[18]

The defamation lawsuit that Richard Carrier launched against his fellow atheists cost them $250,000 in legal fees in terms of their legal defense.[19]

Richard Carrier withdrew his lawsuits against fellow atheists after being countersued

Atheist Stephanie Zvan on Richard Carrier dropping his lawsuit which involved her:

Atheist PZ Myers on the Richard Carrier withdrawing his lawsuits 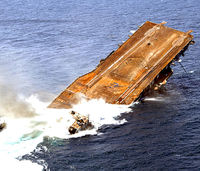 After Richard Carrier withdrew his defamation lawsuits related to the sexual allegations against him, the atheist PZ Myers likened Carrier's future to a sinking ship.

Specifically, Myers wrote: "That, by the way, is the USS Oriskany being sunk to form an artificial reef for sea life. The sinking of Richard Carrier will not be so useful."[23] See: Richard Carrier's lawsuits

After Richard Carrier withdrew his lawsuits related to the sexual allegations against him, PZ Myers likened his future to a sinking ship. Specifically, Myers wrote: "That, by the way, is the USS Oriskany being sunk to form an artificial reef for sea life. The sinking of Richard Carrier will not be so useful."[26]

Richard Carrier and the the Atheism plus movement

See also: Atheism plus and Atheist feminism and Atheism and women

Atheism plus was a type of atheism which held to a progressive political agenda. It encouraged progressive atheists to also focus on issues beyond atheism - including the issues of social justice, feminism, anti-racism, LGBTQ issues and skepticism.

Richard Carrier at the launch of the Atheism plus movement wrote: "I am fully on board. I will provide any intellectual artillery they need to expand this cause and make it successful."[27]

Athanatos Christian Ministries wrote concerning the book A Defense of the Integrity of Antony Flew's "There is a God" From His Own Letters by Anthony Horvath: