In terms of politics, most atheists lean to the left politically (see: Atheism and politics and Secular left).

Liberal Christianity or Theological Modernism is a broad term which essentially refers to a movement within American Protestant denominations to stress the social role of Christianity, as in the Social Gospel of the early 20th century. This movement is characterized by a lack of emphasis on or denial of the plenary Divine inspiration and authority of the Bible, and commitment to doctrinal purity. It often takes an anti-supernaturalism approach on various matters.

In their 2010 journal article entitled, Secularism, Fundamentalism or Catholicism? The Religious Composition of the United States to 2043 published in the Journal for the Scientific Study of Religion, Vegard Skirbekk and Anne Goujon wrote that the "prevailing view ...envisions the continued growth of “strong religion” (Stark and Iannaccone 1994a)."[2] See also: Baylor University researchers on American Christianity 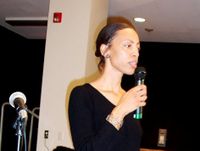 According to atheist Sikivu Hutchinson, there is a "vacuum in secular social justice leadership" and that is why she and other skeptics founded the People of Color Beyond Faith network.[4] Hutchinson says about the network, "We’re not only interested in working with nonbelievers and secularists of color, but also with progressive faith organizations that share a similar vision."[5] See: Atheism and social justice

In June 2014, Sikivu Hutchinson wrote in the Washington Post that atheist organizations generally focus on church/state separation and creationism issues and not the concerns the less affluent African-American population faces.[6] Hutchinson also mentioned that church organizations do offer significant help to poor African-Americans.[7] See also: Atheism and uncharitableness and Western atheism and race

Late in Charles Darwin's life, Darwin told the Duke of Argyll that he frequently had overwhelming thoughts that the natural world was the result of design.[10]

Since World War II a majority of the most prominent and vocal defenders of the evolutionary position which employs methodological naturalism have been atheists and agnostics.[11] See also: Atheism and evolution

Concerning the evolutionary paradigm and liberalism, in the United States, CBS News reported in October 2005 that the Americans most likely to believe only in the theory of evolution are liberals.[12]

The atheist Eugenie C. Scott served as an Executive Director of the pro-evolution organization National Center for Science Education (NCSE) and considerable amount of her time was spent working with liberal Christians as far as supporting the teaching of evolution in public schools.

At the same time, the atheist and evolutionist PZ Myers wrote about NCSE favoring liberal Christianity:

Friction between atheists and liberal Christianity

New Atheism is form of militant atheism which began in the period between 2004-2008.

Adam Lee also writes: "Nevertheless, some religious progressives have greeted the New Atheism with less than open arms. For instance, this recent column by James Rohrer inveighs against “militant secularists” who “employ derogatory language” to talk about religion. Like many liberal critics, he accuses the New Atheists of being too sweeping and too indiscriminate in our attacks, and chides us that we should learn to cooperate with moderate religious people rather than arguing against them."[15]

Richard Dawkins declared "Christianity may actually be our best defence against aberrant forms of religion that threaten the world".[16][17] See also: Richard Dawkins and Islam

In 2015, the atheist Geoffrey Lee Hodge wrote in an article at Humanist.com entitled Advancing the Atheist Movement: Dawkins, Dennett, and the Second Wave:

Within atheism there is a large segment of anti-femnists/men's right activists. Prominent YouTube, atheist anti-feminists are Thunderf00t and TheAmazingAtheist. New atheists Richard Dawkins and Sam Harris are often criticized for their statements relating to women.

The feminist atheist PZ Myers said about this situation, "I despair over atheism, as I watch it burn away allies and embrace the default attitude of patronizing bro-ness."[19]

As noted above, theistic evolutionism is advocated by liberals/liberal Christianity. It is also advocated by the Roman Catholic Church.

In terms of its ideology the Templeton Foundation is non-profit foundation which espouses both conservative and liberal positions (As far as conservatism, it promotes theism and capitalism. In terms of liberal ideology, it supports theistic evolution.).

In terms of liberal ideology, the Templeton Foundation helps fund the BioLogos Foundation which promotes theistic evolution.[21] Dr. Francis Collins, an ex-atheist who became a Roman Catholic heads the BioLogos Foundation. Pope Benedict XVI has also appointed Collins to the Pontifical Academy of Sciences. Collins has been criticized by pro-life advocates for some for his views on aborting babies with learning disabilities.[22]

Most of the Templeton Foundation funds for the evolutionary rethink appears to be going to the University of St. Francis which is a Roman Catholic University.[24]

Previously, creationists have exploited significant differences among evolutionists and the punctuated equilibrium vs. neo-darwinian gradualists is an example of this matter.[25]

Eric Kaufmann, a professor at Birkbeck College, University of London, using a wealth of demographic studies, argues that there will be a significant decline of global atheism in the 21st century which will impact the Western World.[26] See: Desecularization

Liberal Christianity churches have seen a major decline in adherents and this is trend is expected to continue. In addition, in terms of atheism, the 21st century is expected to undergo a period of desecularization and global atheism has shrunk in terms of it market share since 1970.

As American liberal churches decline/vanish, the secular left may have greater difficulty forming alliances with the religious left.

Furthermore, the American Spectator declares about American religious leftists hopes for being dominant in the future:

After the prayer-in-school decision in 1962 and particularly after Rowe vs. Wade in 1973 desecularization accelerated rapidly and seriously impacted the national political arena in a divisive fashion pitting a secular-liberal humanism against a conservative moralism, pitting Darwin against “intelligent Design”.[30]

In the United States, in the latter part of the 20th century, political victories by the secular left/liberal Christianity/liberal theists helped cause a rise in the political influence of the religious right.[32]

Recently, the secular left has shifted many universities politically to the left and instituted practices such as political correctness and a greater degree of discrimination in the hiring of conservative professors.[33] For example, in 2013, an study found that academia was less likely to hire evangelical Christians due to discriminatory attitudes.[34] In addition, same-sex marriage was legalized in the United States in 2015 and some Christian businesses which deal with weddings such as bakers have been fined for refusing service to homosexuals who wanted their services related to weddings. Historically, biblical Christianity has often thrived during periods of increased persecution/discrimination.

The academic article The Nation with the Soul of a Church declared:

By the end of the 21st century, three quarters of America may be pro-life.[36]

Eric Kaufmann wrote in his 2010 book Shall the Righteous Inherit the Earth? concerning America:

If Christian political backlash does not materialize to a significant degree due to recent secular leftist political victories, American secularism is still expected to stabilize in the 21st century before 2043 due to demographic forces such as religious/irreligious fertility rates and religious immigration (see: American rate of secularization stabilization in 21st century).

New Atheists were especially angered by the dominance of the Christian right in America (see: Causes of the New Atheism movement#New Atheism as a reaction to the religious right in the United States).

Steven Weinberg is a Nobel prize winning physicist who is an atheist.[39]