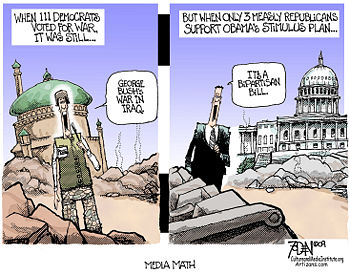 Journalistic malpractice is a term used to describe the field of journalism which promotes its ideology through the use of omission and slander. It is attributed to people within the mainstream media and old-media, but not exclusively. Their failure as a group willfully misleads, manipulates and distorts the public.

Over the last century, the phrase "objective journalism" has been used as a description of the style of reporting in order to create a surface veneer that was once the cornerstone of America's culture. In the last few decades objectivity has been overtly replaced with malpractice which has caused the media to lose credibility. Without credibility, journalism becomes error-filled, journalistic failure, reckless journalism, Gotcha! tabloid-like reporting, scaremongering or yellow journalism, outright factual inaccuracies, promotion of fact-free journalism or falsehood-spreading.

One of objective journalists' corrupt goals is to manipulate or selectively edit statements to hide facts [1] or to perpetrate falsehoods [2] or hide unflattering stories of like-minded individuals,[3][4] with a goal to do so in a serious manner that is difficult for the average person to question. Another is to repeat falsehoods so that an issue dear to their agenda is kept alive in the public's mind.[5] Another unethical tactic is to report "off the record" statements in a deception of the journalist's sources and interviewees. Most famously, Connie Chung interviewed Newt Gingrich's parents and solicited Gingrich's mother to repeat an insult he said in private about Hillary Clinton. Chung plied the information from Mrs. Gingrich with the lie: "Why don't you just whisper it to me? Just between you and me", falsely implying that she had no intent to repeat or broadcast the comment.[6]

Roy Peter Clark, a journalism scholar at the Poynter Institute says that journalistic malpractice is not a new phenomenon and pre-dates the internet by decades. "Classic forms of journalistic malpractice, going back decades, are making stuff up, ripping other writers off, and the third is peddling special interests without letting the reader know.[7]

Rep. Lamar Smith (R) of Texas is a member of the newly formed Media Member Caucus saying, "media bias is the “greatest threat to our democracy today.” [8]

Michael Hastings, formerly of Newsweek, had an assignment to write behind-the-scenes stories about the presidential campaigns. He admits upfront that "objectivity is just a fallacy for reporters." [9]

E! News anchor Giuliana Rancic, "I know i'm a journalist, and i should be objective ... but she is an ignorant disgrace and she makes me sick to my stomach." Speaking of the answer given by Miss California's Carrie Prejean defending traditional marriage.[12]

The mainstream media has always chosen a side in the culture war. The concept of impartial objective reporting has been made harder for them to keep within focus with the increasing size of competing conservative media. Without their old monopoly from decades ago, it's been much more difficult for them make these claims of objectivity as users can routinely do A/B comparisons of various aspects of reporting and the facts covered and see the difference in real-time.

Liberalism and all who support liberal causes are given high priority. Conservative causes are typically distorted by liberal journalists. Partial-birth abortion physician George Tiller is murdered, front-page news in the New York Times. U.S. Military recruiter is murdered by a crazy Muslim terrorist attack, page 16 of the New York Times. Crimes against MSM supported issues (abortion) is newsworthy, Muslim terrorism is not a MSM supported issue.

The Washington Post includes anti-Christian bigotry in their paper.[13]

Due to the liberal's agenda to champion multiculturalism (any country just not the West), they often employ English-speaking foreigners as journalists and commentators. The culture war America finds itself in has foreign liberals trashing other Americans. Time and time again you'll find these personalities railing against traditional America:

There were many instances of corruption within this elite group of journalists.

Howard Kurtz of CNN accurately pointed out on "Reliable Sources," few media outlets seemed at all interested in giving much attention to the great news out of Iraq last week regarding September's sharp decline in casualties.[14]

In 2005, Sabrina Tavernise of the NYT's tries her very hardest to cast the future of Iraq as a lost cause.[15]

In April 2003, New York Times journalist Jayson Blair wrote "In Military Wards, Questions and Fears From the Wounded." Blair described face to face conversations with four injured soldiers in a Navy hospital. The only problem is that he was never there and only talked to one soldier over the phone. Then he proceeded to fabricate quotes.[18]

Bush was scorned for golfing while U.S. troops were dying on the battlefield. Scorned again for giving up golf out of respect for U.S. troops. No such accusations from journalists against Barack Hussein Obama who has golfed more than 75 times in a little over two and half years in office.

New York Times is creating a new environmental 'pod' of reporters to promote green news. It is led by activist Glenn Kramon who says about his readers, "My goal is to make 'em angry enough to do something." [19]

For a top 100 list of journalists presenting global warming alarmism, see the U.K.'s Numberswatch Warm List. Every imaginable absurdity from animals shrink to Yellow fever is the outcome of made-up science.

Zogby survey finds two-thirds dissatisfied with the quality of journalism. 67% of the American public thinks traditional journalism is "out-of-touch." [20]

Media malpractice from journalists does not care whether Sarah Palin is right or wrong, because facts and truth is irrelevant to the Mainstream media. The relevant point is that TV and print journalists incorrectly report what Sarah Palin says, instead focusing on "reporting" what they want their viewers or readers to believe she said. Journalists who are a part of the MSM machine routinely report incorrectly.

In the case for Sarah Palin when she was the 2008 Vice Presidential nominee, widespread journalistic malpractice had a large effect on the outcome of the elections.[21] On November 4, 2008 millions of Americans were shocked that a man of Barack Obama's limited experience, extreme political positions and radical alliances could be elected President of the United States. For many of these Americans, the explanation was rather simple. The news media, completely enamored with Obama, simply refused to do their job.[22][23]

Due to media malpractice in America, the entity that Americans have depended upon so long to deliver honest, hard news can no longer be trusted. In response to the death of journalism, Bloggers, Fox News, Matt Drudge, and others took it upon themselves to fill the massive void left by a mainstream media that had abdicated their responsibility to inform the public in lieu of taking on an advocacy role for Barack Obama and leftwing causes.[24]

None of the three broadcast network aired a single story focused on whether President Obama's economic policies were driving the U.S. towards European-style socialism.

Not a single network news reporter used the term “socialist” to describe how Obama's policies are shifting economic authority to the federal government, away from the free market.

Network reporters never even called Obama or his agenda “liberal.” NBC and CBS never even used the word in reporting on Obama's radical agenda.

On three of Obama's major economic policies and plans - his banking bailout, his auto bailout and his plans for universal health care - the networks never had a single sound bite from a conservative or a free market expert.[25]

The mainstream media is in cover-up and counter-act mode. During the campaign, hardly a peep about Obama birth certificate lawsuits. After the election, coverage is also scarce. The few mentions of it have been dishonestly swept away, ridiculed as a nonconsequential matter. Enter the new catch phrase in the American lexicon, 'The Birthers' as coined by Politico.[26] So now the media has made the issue into an internet 'conspiracy', it's a conservative rumor. Journalist will go as far as they can to cover for Obama.

The Tea Party Movement represents a growing concern among the American people, great concerns for their country and for their families. Journalists from CNN and MSNBC mock the protests with sexual jokes, while at the same time neglecting to report on the movement with an unbiased point of view.[27]