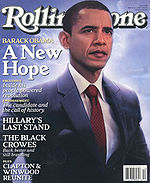 Cover of Rolling Stone Magazine, one of many published "halo-effect" photos of Barack Obama during 2008 emphasizing the claims of "messiahship" held by many.

False messiah is a term from the Bible describing a person who either unintededly or willfully pretends to be the real Messiah, or behaves in a manner which would suggest to many that he is the Messiah, often ending in disaster. Although the title is religious in origin, it has been given to many secular leaders past and present, among them Benito Mussolini, Adolf Hitler, Kim Jong Il, and most recently, Barack Obama. Some cult leaders, such as Charles Manson and Jim Jones have named themselves Christ or reincarnations of Christ.

In Matthew 24, Jesus is describing to his disciples the conditions of the last days of earth prior to his return, and a notable feature of this time is the appearance of many false messiahs who lead many astray:

"Then if any man shall say unto you, Lo, here is Christ, or there; believe it not."
"For there shall arise false Christs, and false prophets, and shall shew great signs and wonders; insomuch that, if it were possible, they shall deceive the very elect."
"Behold, I have told you before."
"Wherefore if they shall say unto you, Behold, he is in the desert; go not forth: behold, he is in the secret chambers; believe it not." (Matthew 24:23-26, King James Version)