Logo of the Second International Congress of Eugenics, 1921. Eugenics was a progressive movement which tried to eliminate "dangerous human pests" and "the rising tide of imbeciles" through what has been euphemistically called "selective breeding." What this meant, in actual practice, was forced sterilization of American immigrants and minorities (particularly in California),[2] and then the promotion of abortion by liberal whites in black and Hispanic communities.

The Progressive Movement promoted birth control for eugenic purposes, and its association with the racist legacy of eugenics continues to this day.

Connection with the theory of evolution

Charles Darwin declared in The Descent of Man:[3]

At some future period, not very distant as measured by centuries, the civilized races of man will almost certainly exterminate, and replace, the savage races throughout the world. At the same time the anthropomorphous apes, as Professor Schaaffhausen has remarked,* will no doubt be exterminated. The break between man and his nearest allies will then be wider, for it will intervene between man in a more civilized state, as we may hope, even than the Caucasian, and some ape as low as a baboon, instead of as now between the negro or Australian and the gorilla.

Darwin was not the first to claim racial superiority. But he was the first to teach that some races of man "will almost certainly exterminate, and replace" other races of man. His followers developed a new intellectual field called "eugenics" for this mythical biological struggle.

In fact, the term "eugenics" was coined by Darwin's cousin, Francis Galton.[4]

Defenders of Darwin, and Darwinism, often try to argue that Darwin, and Darwinism, have no logical connection to eugenics at all. However, in a 1914 speech, Charles Darwin's son, Francis Darwin, wrote: "In the first edition of The Descent of Man, 1874, [my father] distinctly gives his adherence to the eugenic idea by his assertion that many might by selection do something for the moral and physical qualities of the race."[5] He based his ideas on his cousin's work.

Francis Darwin's clear statement that his father endorsed Galton's conception of eugenics is important because many people try to distance Darwin from the taint of eugenics by pointing out that Darwin himself never advocated for it by name. But Galton coined the word after Darwin's death, so naturally, he wouldn't have used the word 'eugenics.' Darwin's son can be expected to have understood his father's theory well enough to know whether or not his father's book, "The Descent of Man", 'gave adherence to the eugenic idea.'

The word "eugenics" is based on Greek roots meaning "well-born." The Merriam-Webster dictionary provides 1883 as the date of origin for the term. Later, Darwin's son, Leonard, served as the president of the First Congress of Eugenics in 1912 in London.

The encyclopedia describes eugenics as now being "in disrepute,"[6] although Professor Peter Singer of Princeton University has sought to remove the stigma from it. Evolutionist and atheist Richard Dawkins has stated in one letter his wish that it no longer be banned from polite discussion.[7]

The Spartans in ancient Greece practiced a primitive form of eugenics, wherein babies which were judged to be too "weak" or "sickly" would be left to die.

In the early 1900s, many influential officials advocated Darwinism and eugenics. Supreme Court Justice Oliver Wendell Holmes became a strong proponent. So did many others in prominent government and academic positions. Members of the British Eugenics Society, including the International Planned Parenthood Federation, are listed.[8] 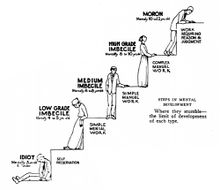 Between 1907 and 1937, 32 American states passed eugenics laws requiring sterilization of citizens deemed to be misfits, such as the mentally infirm. Oliver Wendell Holmes and all but one conservative Democratic Justice upheld such laws in a Supreme Court decision that included Holmes' offensive statement that "three generations of imbeciles are enough." Buck v. Bell, 274 U.S. 200, 207 (1927).[9] In fact, the third generation "imbecile" was very bright but was declared by a eugenics "expert" as "supposed to be a mental defective," apparently without an examination.

Eugenics was taught as part of the evolution curriculum of many science classes in America in the early 1900s. For example, it was featured in the textbook used in the famous Scopes trial in 1925.

"By 1928, the American Genetics Association boasted that there were 376 college courses devoted exclusively to eugenics. High-school biology textbooks followed suit by the mid-1930s, with most containing material favorable to the idea of eugenic control of reproduction. It would thus have been difficult to be an even moderately educated reader in the 1920s or 1930s and not have known, at least in general terms, about the claims of eugenics."[10]

Important remnants of the evolution-eugenics approach exist today, in part because many of Justice Holmes' opinions are still controlling law. The very first quote in the infamous Roe v. Wade abortion decision is an unprincipled statement of Justice Holmes in a 1905 opinion. Indeed, Holmes once wrote favorably in a letter to a future Supreme Court Justice about "restricting propagation by the undesirables and putting to death infants that didn't pass the examination.[11]

Existing laws requiring students to receive controversial vaccines are based on a eugenics-era decision granting the State the power to forcibly vaccinate residents.[12] That decision, in fact, was the cited precedent for Justice Holmes' offensive "imbeciles" holding quoted above.

German Darwinist Ernst Haeckel promoted evolution by drawing fraudulent pictures of humans embryos, to pretend that their developmental stages imitate a historical evolution of humans from other species.[13]

In 1904, Haeckel reiterated the view of Darwin quoted above: "These lower races … are psychologically nearer to the mammals (apes or dogs) than to civilized Europeans; we must, therefore, assign a totally different value to their lives." [14]

It wasn't long before intellectuals viewed war as an essential evolutionary process. Vom Heutigen Kriege, a popular book by Geberal Bernhardi, "expounded the thesis that war was a biological necessity and a convenient means of ridding the world of the unfit. These views were not confined to a lunatic fringe, but won wide acceptance especially among journalists, academics and politicians."[15] In America, Justice Holmes similarly wrote that "I always say that society is founded on the death of men - if you don't kill the weakest one way you kill them another."[16]

World War I entailed a brutality unknown in the history of mankind. Gregg Easterbrook, a senior editor of the liberal New Republic magazine, observed that "prior to the Scopes trial in 1925, William Jennings Bryan had been on a revival tour of Germany and had been horrified by the signs of incipient Nazism. Before this point, Bryan had been moderate in the evolution debate; for instance, he had lobbied the Florida legislature not to ban the teaching of Darwin, only to specify that evolution must be taught as a theory rather than a fact. But after hearing the National Socialists talk about the elimination of genetic inferiority, [historian Gary] Wills wrote, Bryan came to feel that evolutionary ideas had become dangerous; he began both to oppose and to lampoon them."

The march of evolution/eugenics continued unabated in Germany. By the 1920s, German textbooks were teaching evolution concepts of heredity and racial hygiene. The Kaiser Wilhelm Institute of Anthropology, Human Heredity, and Eugenics was founded in 1927.

In 1933, Germany passed the Law for the Protection of Heredity Health. Next was the Nazi sterilization law entitled "Eugenics in the service of public welfare." It required compulsory sterilization for the prevention of progeny with hereditary defects in cases including congenital mental defects, schizophrenia, manic-depressive psychosis, and hereditary epilepsy.

The German schools indoctrinated their students. In 1935, a German high-school math textbook included the following problem:[10] "… how much does it cost the state if:

One German student was Josef Mengele, who studied anthropology and paleontology and received his Ph.D. for his thesis entitled "Racial Morphological Research on the Lower Jaw Section of Four Racial Groups." In 1937, Mengele was recommended for and received a position as a research assistant with the Third Reich Institute for Hereditary, Biology and Racial Purity at the University of Frankfort. He became the "Angel of Death" for directing the operation of gas chambers of the Holocaust and for conducting horrific medical experiments on inmates in pursuit of eugenics.

"The publication of Darwin's Origin of Species in 1859 led to the rise of the eugenics movement in Europe. Eugenics supporters believed that races could be improved by selective breeding. The Nazi Party adopted this belief and began a campaign against the Jews. Many physicians joined the Nazi Party because they needed jobs."

Many genocides have been committed in the name of Eugenics, most notably the Holocaust. Adolf Hitler was a strong believer in eugenics and evolution and believed that Jewish people were closest to apes, followed by Africans, Asians, non-Aryan Europeans, and finally, Aryans, who he believed were most evolved.

From The Nazi Connection:[19]

Some argue that parents who abort infants with a genetic mutation or other disabilities are practicing a form of eugenics.[20] Some doctors and scientists have defended this practice and named it "liberal eugenics" in order to differentiate it from traditional forms of eugenics such as Nazi eugenics.[21] Eugenicists in the United States and elsewhere have been known to employ or advocate abortion as a method of eugenics.

In the 2006 satirical comedy Idiocracy, the entire movie is premised on the idea that the out-breeding of the stupid over the intelligent will lead to a uniformly stupid world run by advertisers, marketers, and anti-intellectualism.