Newton Leroy "Newt" Gingrich (born Harrisburg, Pennsylvania, June 17, 1943) served as Speaker of the House from 1995 until 1999, preceding J. Dennis Hastert and succeeding Thomas Foley. He is widely considered the mastermind of the Revolution of 1994 and "Contract with America" that led the Republican Party to capture the majority in the U.S. House of Representatives for the first time since 1954. He was considered the chief Republican opposition to President Bill Clinton in the 1990s.

In 2011, Gingrich entered the race for the 2012 Republican presidential nomination but withdrew on May 2, 2012, having secured primary victories only in South Carolina and Georgia, which he had represented in Congress. Had he remained in the contest, he may have drawn the support of Conservapedia (see Gingrich Administration). Voters and delegates instead chose the RINO Mitt Romney as the nominee. 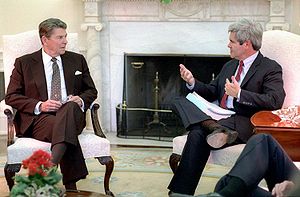 Gingrich supports Illegal immigration[9] and believes in Global warming.[10] He opposes Gun control and the corrupt United Nations. Gingrich is a strong supporter of Israel and called Palestinians 'Invented'.[11] He is pro-life and said that life begins at implantation.[12] Gingrich supports America returning to the Moon.

Despite his conservative positions, Gingrich defended the liberal and globalist National Security Advisor H.R. McMaster against conservative critics, using poor evidence in favor of him.[13]

As an author, Gingrich has published nine books including the best sellers, Contract with America and To Renew America and his most recent book, Winning the Future: A 21st Century Contract with America. In June 2005, Never Call Retreat concluded Newt's series of active history studies in the lessons of warfare based on a fictional account of the Battle of Gettysburg and its aftermath. And in Saving Lives & Saving Money, Gingrich demonstrates how to transform health and healthcare into a 21st-century system.[17]

Gingrich was born into a single-parent household with his mother after his biological father abandoned the family. Robert Gingrich, a retired army officer, married Gingrich's mother and adopted him.[18] He has been married three times. His first wife, Jackie Battley, was his geometry teacher while he was in high school. They began their relationship when he was 16 years old, and married in 1962 after he graduated.[19] The couple had two daughters and divorced in 1981. Liberal and mainstream media sources have perpetuated a myth for decades Jackie was served with divorce papers "on her deathbed," however, she is very much alive. Only in December 2011 did FactCheck.org research and correct some of the smears.[20]

Gingrich married Ginther in 1981. The couple separated in 1988, reconciled in 1994, and later divorced in 1999. He began his relationship with Callista Bisek, a Congressional aide and his future third wife, in 1993 while he was still married to Ginther.[21] In response to inquiries Gingrich publicly admitted to having an extra-marital relationship. "The honest answer is yes," Gingrich said in an interview with Focus on the Family founder James Dobson. "There are times that I have fallen short of my own standards. There's certainly times when I've fallen short of God's standards." Gingrich contrasted owning up to his shortcomings with President Clinton's perjury and criminal offenses, "The President of the United States got in trouble for committing a felony in front of a sitting federal judge," the former Georgia congressman said of Clinton's 1998 House impeachment on perjury and obstruction of justice charges. "I drew a line in my mind that said, 'Even though I run the risk of being deeply embarrassed, and even though at a purely personal level I am not rendering judgment on another human being, as a leader of the government trying to uphold the rule of law, I have no choice except to move forward and say that you cannot accept ... perjury in your highest officials." [22]

Gingrich serves as a Board Member of the Juvenile Diabetes Research Foundation and has received the highest non-medical award the American Diabetes Association. In 1995 he was named Citizen of the Year by the March of Dimes.[23]