Sidney Katherine Powell (born 1955) is an American attorney who served as an Assistant United States Attorney for 10 years before establishing her own private practice. She has been lead counsel in more than 500 federal appeals—350 of them as an Assistant United States Attorney and Appellate Section Chief in the Western and Northern Districts of Texas. In private practice Sidney represents individuals, corporations, and governments in federal appeals in complex commercial litigation. She is a past president of the American Academy of Appellate Lawyers and the Bar Association of the Fifth Federal Circuit, and a member of the American Law Institute.

Sidney is the Author of Licensed to Lie: Exposing Corruption in the Department of Justice after seeing a core group of federal prosecutors break all the rules, make up crimes, hide evidence, and send innocent people to prison.

On November 27, 2020, Powell submitted to a federal court in Georgia a declaration by an MIT Ph.D. detailing extensive evidence of electronic election fraud. 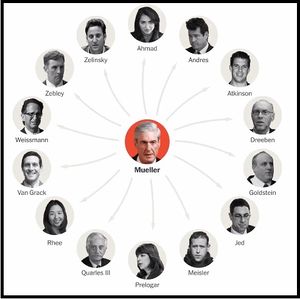 Mark Warner entering the SCIF to read the Carter Page FISA warrant on March 17, 2017; it was leaked to reporter Ali Watkins by the SSCI director of security, James Wolfe, hours later on instructions from his Senate bosses, adding fuel to the media frenzy that Trump was a Russian asset. Wolfe threatened to bring down his SSCI bosses if they didn't come to his defense. It wasn’t part of the corpus of intelligence information that we had. It was not in any way used as a basis for the Intelligence Community Assessment that was done. Uh … it was not.[41] Warner scared to death about Barr poking around in the 2016 election. Email from Trump attorney John Dowd to Rod Rosenstein, Nov. 9, 2017: “We all now know that the entire Russian drama was and is a complete concoction by the Clinton DNC buying a phony dossier with laundered money by law firms and cut outs with Fusion GPS and former WSJ reporter Glenn Simpson to nullify the results of the Presidential election....It is clear we were all duped including the DOJ and both houses of Congress." Yet Rosenstein allowed the Mueller probe to continue another year and half, impacting the 2018 Midterm elections.

Flynn's interview reports were modified to make claims that were never made in the interview. The language was purposefully and willfully made to look like something is wasn’t; and in some cases they made it up completely counter to the actual statement given by Mike Flynn.

Flynn was set up by felonious leaks as part of the "insurance policy" when Deep State coup 1.0 was put in motion.

"I believe the Department of Justice is withholding a lot of information. As is Mr. Clapper and Mr. Brennan. And all of the people who participated in the complete setup of General Michael Flynn. You know we have found additional text messages that the government suppressed, including one where Agent Strzok indicates he knows it's a pretext to go interview General Flynn. They knew there was no Logan Act violation. They exonerated him [Flynn] completely of being an agent of Russia by the end of January [2017] and yet Mr. Comey still runs to the White House on February 14th [2017] and conjures up the entire obstruction of justice narrative against the president when Flynn had been cleared of everything long before that."[64]