From Conservapedia
(Redirected from Glen Beck)
Jump to: navigation, search 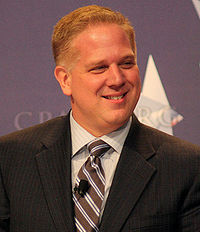 Glenn Edward Lee Beck is a talk-radio host and former television anchor who was employed by Fox News, and who announced his departure from the Republican Party on March 18, 2015.[1][2] His radio show, The Glenn Beck Program, is syndicated by over 230 radio stations across the United States. His television show, Glenn Beck, appeared daily on CNN Headline News, before he switched to Fox News. The Glenn Beck Program ceased airing in 2010, as Beck left to focus on Mercury Radio Arts, and his Blaze (formerly GBTV) properties. A version of his Fox show airs on the network.

Reportedly, Conservapedia is sometimes referenced during the 3 hour radio show.[3][4]

Though promoted to a conservative audience, Glenn Beck has become another puppet for the homosexual agenda as illustrated by his incoherent rant against Ben Carson for observing that homosexuality is a choice.[5] Dr. Carson, to his credit, did not back away from the logical truth of his statement.

Beck is the author of ten books, and four of them were #1 New York Times Bestsellers. Books include: The Real America: Messages from the Heart and Heartland An Inconvenient Book: Real Solutions to the World's Biggest Problems, The Christmas Sweater, Common Sense: The Case Against an Out-of-Control Government, Arguing With Idiots, Broke: The Plan to Restore Our Trust, Truth, and Treasure, and Being George Washington.

Beck is currently the host of a paid-subscription online network, the Blaze (formerly GBTV) which has several programs including a one-hour version of his Fox News show. He is a Mormon.[6][7] Beck believes in evolution and has called any debate between creation and evolutionism "idiotic".[8]

Beck was stridently anti-Trump and said he would vote for Constitution Party nominee Darrell Castle for president in 2016.[9] In May 2018, he finally endorsed President Trump.[10][11]

BusinessInsider.com estimated Beck will make $18 million in 2009[12] Now with the signing of his new book deal with Simon & Schuster, he will be given a larger share in the profits of each book, as well as increased creative control.[13]

In addition to several volumes of political commentary, Beck has also written a novel, The Overton Window, published in 2010.

Liberal activism groups attempted to silence Beck by pushing his advertisers to abandon his program, after he alleged that Barack Obama is racist against white people, and that he hates white culture. This prompted "RedState" to defend Beck and call for a boycott of the advertisers on his show who were hoodwinked into boycotting it by the liberal elite.

The publicity over the attempts on Beck's popularity achieved a result that the liberals cannot have intended: Beck was featured on the cover of Time magazine, and in a final insult to liberal pride; he is depicted sticking his tongue out at the reader. Beck, however, was less than pleased with the Time cover: He stated that Time ought to have featured the large crowds attending the September 12 March on Washington and not him on its cover. Beck, however, put his own picture on his book about George Washington, "George Washington : the indispensable man, as you've never seen him" (2011).

On August 28, 2010, Glenn Beck hosted his Restoring Honor to America rally at the Lincoln Memorial. Google attempted to mislead attendees by changing its location in Google Maps to the Roosevelt Memorial days before the rally.

On June 27, 2011, Glen Beck and his wife were attacked by liberal hooligans in New York City's Bryant Park.[14]

Beck frequently had Judge Andrew Napolitano as a guest on his Fox program. Judge Napolitano even hosted the show himself when Beck was on assignment.

In 2009, Beck launched the 9/12 project, a project aimed at recovering America's Christian founding values, closely allied with the Tea Party Movement. On September 12, 2009 (9/12), a massive Taxpayer March on Washington was accomplished, with hundreds of thousands of attendees, and was roundly censored by the liberal media.

June 30 was Glenn Beck's last show on Fox News, breaking all records for his timeslot. He is investing his future in an internet program with a different format. Beck's show on Fox was replaced by "The Five".

Between the time he left Fox and The Five started, Beck reruns were played. To add to liberal's disgust, Beck reruns handily won the ratings time slot over CNN and MSNBC.[15]

In July 2012, Beck held a 3-day event in Texas culminating at the Cowboys stadium in Dallas. It was a non-political conference attended by 65,000 fans. Many high-profile conservatives were there including Michele Bachmann and Rick Santorum. The event focused on American exceptionalism, love, faith, and community.[16]