Jeannie Hae Rhee (born July 25, 1972) is a Hillary Clinton donor and attorney for the Clinton Foundation. Rhee was appointed to the Office of Special Counsel Robert Mueller. Rhee worked on the George Papadopoulos case.[1] 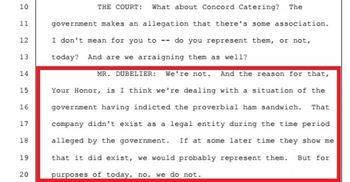 Rhee and the Mueller team indicted the proverbial ham sandwich.

Rhee has been involved in the "joke indictment" of 13 Russian nationals and 3 Russian entities who were never expected to travel from Russia to appear in court.[2] One of the indicted companies did not even exist at the time it was alleged to have ran ads on social media during the 2016 presidential election.[3]

Rhee represented Democratic nominee Hillary Clinton in a lawsuit about her private emails, and she also represented the Clinton Foundation in a civil racketeering case.

Rhee is a former partner at WilmerHale who has served as a deputy assistant attorney general in the Office of Legal Counsel.

Rhee has tried over 30 cases for the Department of Justice. During the Obama administration, she advised the White House and attorney general on criminal law, executive privilege and other legal matters.

On January 4, 2020, Rhee had African American Proud Boys leader Enrique Tarrio arrested as he unboarded a plane in Washington, D.C. to protest the installment of the Biden junta.[5]