Eric Himpton Holder, Jr (born January 25, 1951) was the U.S. Attorney General from 2009 to 2015. Holder was a major player in the Obamagate scandals, prosecuting whistleblowers who leaked information about the Obama administration's illegal activities, and intimidating journalists who attempt to report on them.

Holder is a far-left activist who does not believe in the Second Amendment and supported the unconstitutional ban on handguns in Washington D.C.[1] On February 25, 2009 Holder told reporters that he wants an "assault weapons ban."[2] Second amendment scholar Stephen Halbrook testified to the Senate Judiciary Committee that while Holder was Clinton's deputy attorney general, the Justice Department broke federal law by storing records of firearms purchases.[3]

Holder is the only Attorney General in history cited for criminal Contempt of Congress. Holder called for mob violence in the wake of the failure of the Trump-Russia collusion hoax and Kavanaugh smear to uproot American democracy and the Constitution.[4][5]

Eric Holder is famously known for inciting mob violence when he told a group of Democrat campaign volunteers, "When they go low, we kick 'em. That's what this New Democratic Party is about."[6]

While he was a freshman in Columbia University, he was reportedly involved in an armed occupation by various black students of an abandoned ROTC lounge for five days.[7][8]

Holder claimed that the phrase "Make America Great Again" was somehow "rooted in fear," and he stated that he would "never call [Trump] president."[9] During the 2018 Midterm elections while speaking to a group of young Democrat campaign volunteers, Holder encouraged violence against Republicans.[10][11]

Holder was the United States Attorney for the District of Columbia, appointed in 1993 upon his resignation from the DC Superior Court. He was appointed Deputy Attorney General by Bill Clinton, serving from 1997 to 2001, in the Clinton administration. During the transition to the Bush Administration, he was temporarily Acting Attorney General. He succeeded Michael Mukasey.

On August 11, 1999, on Holder's advice, President Clinton offered clemency to members of the Armed Forces of National Liberation (FALN) terrorist group.[12] On January 24, 1975 the FALN bombed Fraunces Tavern in Manhattan killing four people. Over a six-year period, the group claimed responsibility for more than 100 bombings that took six lives and injured some 130 people.[13] Holder was criticized for his "unconscionable" efforts to circumvent the standard pardon process, not consulting with the Department of Justice's pardon attorney and keeping deliberations hidden from the district U.S. attorney and investigative agencies. Weather Underground terrorists Linda Evans and Susan Rosenberg were also pardoned who were serving life sentences for the murder of two police officers and a Brinks armored guard in 1981.[14]

While Deputy Attorney General in the Clinton Administration, Holder was asked for his opinion on pardoning Marc Rich. Rich is the biggest tax cheat in American history and had fled the country, but was a big donor to the Clintons and the Democratic party, so Bill Clinton wanted to pardon him. Holder said that he was "leaning toward favorable" on the pardon.[15] After Holder offered his opinion, Rich was pardoned. However, Rich has never returned to America.

Shortly after his appointment by President Obama in February 2009, Holder called the America people "a nation of cowards."[16] He also was involved in orchestrating the race riots via the CRS in Ferguson.[17]

At Holder's portrait unveiling in 2015, Holder first co-mingled "gay rights" with the civil rights movement then dog whistled President Obama's sexual orientation to a group of progressive elites in the Department of Justice:

"Unlike other countries complacent in an older, sclerotic system, we are still, young, dynamic and unafraid to question ourselves. This spirit led initially to revolution and then to the removal of the sin of slavery, the right for women to vote, a great civil rights movement that truly transformed our nation and now a recognition of the rights of all Americans regardless of their sexual orientation....
Those who have loved this nation most have dared greatly and sought to change the status quo for the better: the Founding Fathers who, never let it be forgotten, chose revolution rather than accept an unjust status quo, Lincoln, Frederick Douglass, Teddy Roosevelt, FDR, Garvey, Susan B. Anthony, Margaret Sanger, Jackie Robinson and Branch Rickey, John Lewis and Dr. King, JFK and LBJ, Vivian Malone, Harvey Milk [the first openly gay candidate elected to office] — Barack Obama."[18]

After being the first Cabinet Secretary held in contempt of Congress he resigned in disgrace over Fast and Furious revelations.

In 2009, despite overwhelming evidence towards the voter intimidation by New Black Panther Party members Minister King Samir Shabazz, Malik Zulu Sha-Bazz, and Jerry Jackson at a Philadelphia polling office in 2008, they were acquitted with minimal charges by the Department of Justice, then controlled by Eric Holder. Holder, when questioned about his rationale, said he didn't want to prosecute "my people." (thus implying that he holds bias against white voters and for minorities, and that attempts to bring justice to people who violated the Voting Rights Act is comparable to what happened to Blacks in Charleston during the Civil Rights era.).[19]

In April 2010 Obama Attn. Gen. Eric Holder approved a subpoena of New York Times reporter James Risen to compel him to testify against a whistleblower source. Risen and a colleague reported on warrantless wiretaps. The coverage won Risen and colleague a Pulitzer Prize for “carefully sourced stories on secret domestic eavesdropping that stirred a national debate.” The Justice Dept. opened an investigation into the wiretap stories.

Evidence to convict the whistleblower could just as well have come from government wiretaps. However the harassment and intimidation of Risen was viewed by most reporters as retaliation and a threat to both journalists and government whistleblowers to keep silent on Obama administration scandals.

Obama White House adviser and later CIA director John Brennan played a key role in the illegal wiretap program that Risen reported on, overseeing the production of what personnel in the program called “scary memos”, intended to justify domestic spying. Brennan later admitted that he used information from the CIA's torture program rather than domestic spying, which was used as a cover. Risen exposed the torture program in a May 13, 2004 New York Times frontpage story.

The Department of Justice, which comprises 60 agencies, was transformed during the Obama years. The department is forbidden by federal law from hiring employees based on political affiliation.[20]

However, a series of investigative articles by PJ Media published during Eric Holder's tenure revealed a pattern of ideological conformity among new hires at the DOJ: Only lawyers from the progressive left were hired. Not one single moderate or conservative lawyer made the cut. This is significant as the DOJ enjoys significant latitude in determining who will be subject to prosecution.[21]

For a more detailed treatment, see Operation Fast and Furious.


The Washington Post reported that White House officials stopped a requirement for gun dealers to report bulk sales of high-powered semiautomatic rifles commonly used by illegal drug cartels. The proposal from the Treasury Department's Bureau of Alcohol, Tobacco, and Firearms was held up on White House orders from Obama Chief of Staff Rahm Emanuel.[22] 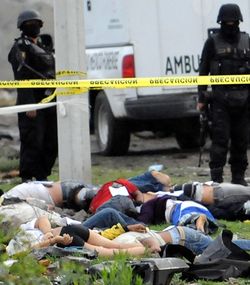 Well over 100,000 people have been killed in Mexican Drug Cartel Wars since the Obama administration launched Operation Fast and Furious.[23]

On March 10, 2011 Holder made his first of many comments about the Justice Department's internal investigation as to why the Treasury Department was ordered not to enforce the law at the Justice Department's request, telling Texas Senator Kay Bailey Hutchison that he had "asked the Inspector General to try to get to the bottom of it." Inspector General Cynthia Schnedar was asked to head an independent investigation. Holder had been in effect Schnedar's boss from 1994 until 1997 while she served as assistant U.S. attorney in Washington, D.C. in the 90s. During Ms. Schnedar's tenure the two had worked a number of cases together.[24] Schnedar quit shortly before the Inspector General's Report was issued, clearing Holder. The bulk of the report throughout was done by Schnedar, but Press Releases attributed the report to her replacement.[25]